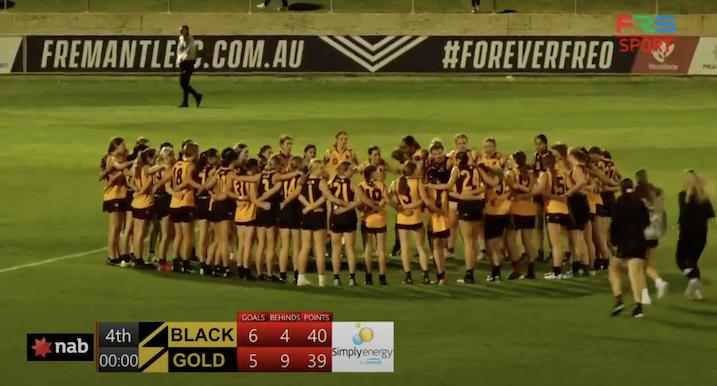 ANOTHER clash in the AFL Women’s U17s Championships saw the best talent in WA split into two teams and come up against each other on Wednesday night at Cockburn. Despite starting off looking like a fairly easy win for WA Black, the game became a hot contest from the second quarter onwards, with each team having their share of controlling possession, able to keep it in their respective forward halves for long periods. Whilst WA Gold fought hard to bring the game back after trailing by 17 points at quarter time, it was WA Black who came away with the win, 6.4 (40) to 5.9 (39)

The first quarter saw WA Black get off to an impressively quick start, winning the first clearance of the game to get the ball in front of U19’s State Representative Emily Boothman, who sprayed the goal to the left for a behind. A first goal would not elude WA Black much longer though, as Millie Jones kicked truly about three minutes in, with Boothman following up not long afterwards. Gold would get one back half way through the term through Abbygail Bushby, but the end of the quarter saw Black get two goals from Agnes Monisse and Jorja Haines, the latter of which right on the siren, to see the scores 1.2 to 4.1 WA Blacks way.

If it was not for inaccuracy in the second term WA Gold would have put up quite an impressive half time lead, with five scoring shots to WA Black’s one, the only conversion in front of goal came from Amber Sinclair about half way through, able to beat her opponent to the ball at ground level and snap from about 30 out. Alli Nokes worked hard in the WA Black defensive 50 to keep Gold’s opportunities relatively small, with midfielder Gracie Fenton not afraid to get involved to win the ball and move it forward. From WA Gold, Kayla Van Den Heever looked to get the ball to her teammates inside 50 and create contests to keep it there, seeing the quarter end 2.6 to 4.2.

Looking to once again take advantage of their ability to control the play, WA Gold had the ball stuck in their forward half early on, but were unable to fully take control of that control of the play. Sinclair got herself a second goal as a reward for her hard work around the forward half. It was a free kick for a ruck infringement inside 50 that got Anjelique Raison her first and put WA Gold in front by a goal. Athena Mendoza would chime in late in the quarter with a goal, seeing the third end at 4.9 to 5.3 (33) apiece.

With the game tied it was only natural that the fourth quarter would be a tight and hotly fought contest. It did not take long for Fenton to hit the scoreboard for a handy point, quickly followed by Holly Britton who kicked a goal, after dropping a contested mark, where she was cleaner at ground level and then snapped around the body into an open goal. A clearance win inside 50 saw Tamashya Blurton kick a goal and put Gold within a point, but they unfortunately could not score from there, seeing the game end 5.9 (39) to 6.4 (40).

Starting off the game in the defensive 50, Raison impressed with her attack on the ball at ground level and in the air, using her strength to beat opponents one-on-one and win possession. Her use by hand was good, generally hitting her teammates well and quickly. In the second half she predominantly played ruck where she looked competitive and again used her strength, especially at stoppages around the ground, to gain the front position and control the placement of her taps. This strategy got her a crucial free kick that led to goal in the third term to get Gold in the lead.

Playing all around the ground, Henry found it easiest to impact when she was filling a rover role, able to position and time her runs best to win clearances, with the rare times she was challenged in that regard seeing her come off best with her strength. What was perhaps most impressive about Henry was how high her skill work and movement level was compared to the rest of the field, excelling at moving through tight space without being tackled and giving off the hands to an outside runner, and despite showing that this was well within her capabilities, she still looked to give off the quick hands when it was there, not trying to do too much with it. Despite not kicking often, she often hurt the opposition when she did kick, often getting 40+ meters behind it. When she moved into the backline she looked less impactful overall, but still held her own and played her role well, offering plenty when pushing up to assist as a loose behind the play type of player.

Splitting her time between a half forward role in the first half, and a rover role in the second, Van Den Heever was a consistent contributor in the Gold attacking play, particularly coming to life in the second quarter when the midfield was consistently getting it into the forward line, her ability to spot teammates in opportune spots was impressive, looking to handball or kick to their advantage to give them room to move into with the footy. When in the midfield, she was given more opportunity to utilise her running game and get additional momentum behind her kicks.

Almost in a reverse role to Henry, starting in defence and ending up in the midfield, Fitzgerald’s attack on the ball and constant intent to run her distance and kick long led to a lot of opportunities inside 50 for the Gold, who unfortunately were not able to capitalise despite Fitzgerald getting it into the right spots. Although she looked strongest when running with the ball, when she got a mark she was comfortable and confident in slowing down the play and spotting the right option.

The sole U19 State Team representative in the game looked one of the clear best and composed in the contest, able to play her role exceptionally well, without letting it stop her from impacting in different areas when required. She was playing as a high-half forward for WA Black, leading up and being a commonly used target when her side was coming out of defensive 50, able to take marks, draw frees or win the ball at ground level, then deliver to other teammates leading for her. When the game was tight in the final quarter, she was thrown into the midfield where she won some crucial clearances and used it well to spread WA Gold.

Zippy by name and Zippy by nature, Fish was an electrifying presence through the middle of the ground, and the main driver for WA Black going inside 50, it was her speed, agility and often penetrative kick that kept WA Black in contention even when Gold had the momentum. She produced multiple highlight moments, bringing candy sells and side steps into the game to keep the Gold players on their toes, and almost hesitant to approach her one-on-one when she had the ball. Fish did not let this offensive output affect her defensive efforts though, still able to apply pressure around the contest and pressure Gold into making mistakes with their disposal.

Designated with the kick in duties for the majority of the match, Nokes was able to consistently get the ball well outside defensive 50 to make any rebounding efforts difficult for WA Gold, setting herself up behind play to be best positioned to impact the next inside 50. She was also given an opportunity to show her wares as an inside midfielder later in the game, where she utilised her strength to ran through packs of players to win the ball, this made her a genuinely dangerous clearance option.

Seemingly one of the harder workers on field, it was common to see Fenton winning possession in deep defensive 50 despite being a midfielder, especially in the second quarter, where she would look to switch the ball out of the backline to give WA Black a different dimension to their transitional work. When in the thick of it in the midfield, Fenton was far more inclined to handball out to a free teammate, or one with space to run into. Executing those handballs quickly proved to be a key part of WA Black getting the ball moving quickly forward, with the rare occasion she turned it over resulting her working hard to apply a tackle.