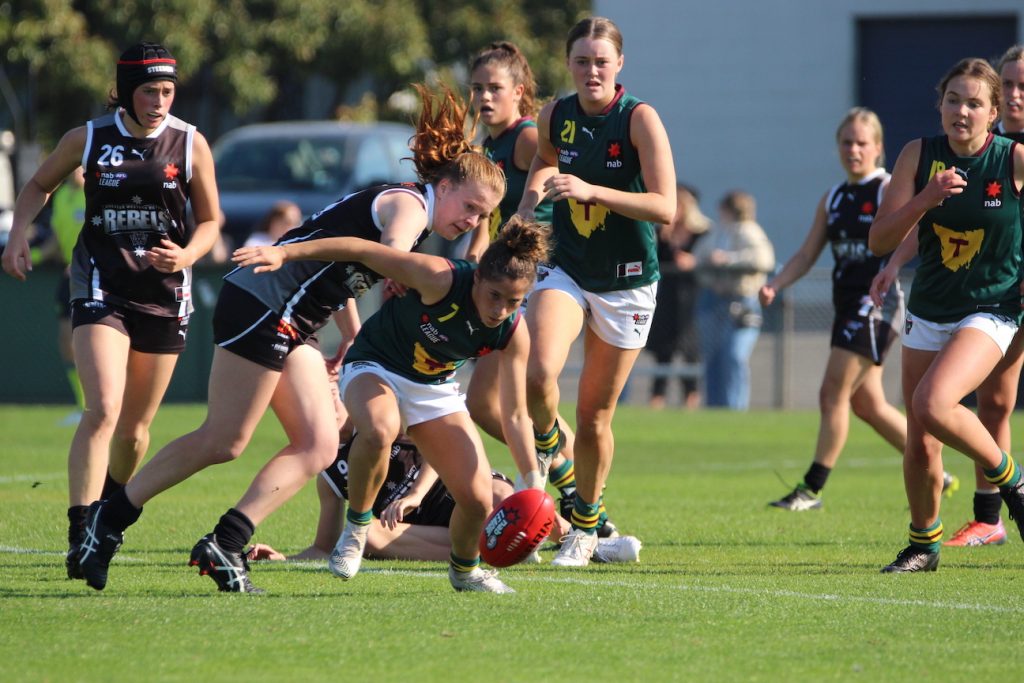 NEXT up in our NAB League Girls team review series are the Tasmania Devils, the biggest improvers from the 2020 season to the 2021 edition. We recap the Devils’ season, and take a look at some of the top performers across those various age groups.

After coming off a shortened season that did not yield a win, Tasmania Devils kicked off 2021 with a bang, smashing Gippsland Power by 62 points at Highgate Recreation Reserve. Pushing eventual premiers Oakleigh all the way before falling six points short, the Devils went on to meet every challenge presented to them, with the only other regular season loss coming against Eastern Ranges. The Devils knocked off the Greater Western Victoria (GWV) Rebels in the final round of the season to secure the minor premiership in the Country pool, before going down to the same opponents by a point a week later.

The AFL Women’s Academy member put together a really consistent season playing through the midfield, often winning the ball and bursting away, or resting forward and looking to send the ball inside. Winning at least 15 disposals in every one of her eight games, King was not only able to impact offensively, but lay a ton of tackles (9.4 per game) to make her mark defensively as well. She finished with 19.9 disposals and 4.2 inside 50s, indicating the importance she had to the team in sending the ball forward, and also winning it back from the opposition.

The gut-running wing continually worked hard around the ground to create space and always put together a four-quarter performance. Much like King, Gaffney was always amongst the top few players on her side such was her consistency and ability to just tick a lot of boxes in her game. She won her fair share of the ball all around the ground and took the game on, always looking to create and break the lines where possible, working as hard as anyone on the field.

One of the 19-year-old prospects coming back to the side this year, Maurer played an important role through the onball supporting King in winning the ball in tight and getting it out, then showing she could play on the outside and spread to win the ball. She was able to play multiple roles for the both the Devils and Allies, and ended up averaging 16.8 disposals and 4.8 tackles, with a lot of her touches being hard-earned. Maurer seemed to get better as the season went on which boded well for a VFLW debut with North Melbourne.

The versatile defender provided good run and carry, but is also capable of playing a shut down role when required. Blair knows when to push up the ground and when to hold back and keep a strong line, and she always put together a consistent effort. At 170cm, Blair could be asked to play on talls or smalls and be relied upon to fill that role successfully.

The pocket rocket ended up booting 10 goals in the NAB League Girls season, the second most of anyone in her team. With a season-high of three goals against Northern Knights to win them the game and our Draft Central NAB League Girls Player of the Week nomination, as well as multiple majors against the Gippsland Power, Bendigo Pioneers and GWV Rebels, Bissett was lively inside 50 with high-level footy IQ and great goal sense.

Class personified, Ransom is one of the brightest stars for next year’s AFLW Draft crop. She has clean hands on the inside, time and space to make the right decision and execute properly, and can play inside or out. Most impressively, Ransom’s consistency was a highlight, and the midfielder made things happen with ball-in-hand. A player her teammates could rely on to dispose of the ball well, Ransom is set to be a key talent to watch in 2022 after a really promising bottom-age season this year.

Providing ultra-consistency as a running defender who could also play up in the midfield, Belbin finished the 2021 season picking up double-figure disposals in all bar one of her games (and that one was nine touches). She created the run and carry in transition with quick hands and an ability to know when to move, also laying some fierce tackles to stop the opposition in their tracks. Expect her to be a key part of the Devils’ midfield next season.

The Devils’ depth across the ground was absolutely superb and a real reason why they fared so well. Amy Prokopiec won the leading goalkicker award with 12 majors in her eight games, while Jemma Webster, Charlotte Dennis, Charlie Vandenberg, Madison Brazendale and Olivia Smith all impressed in nine games earning multiple bests for their sides.