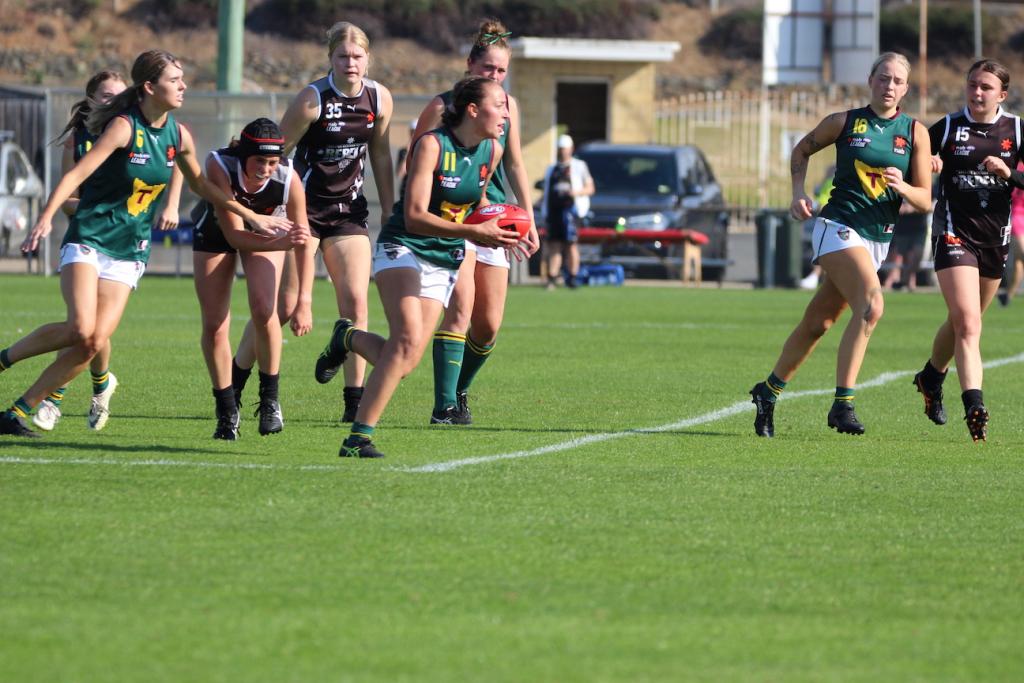 A HEAP of young prospects continue to filter through the Victorian Football League (VFL) Women’s competition, with the revamped structure allowing Under 18 and 19 NAB League players to align with state league sides as both seasons run concurrently. As the NAB League season has now drawn to an end, Round 11 saw plenty more young talent scattered across each state league side. We take a look at how VFLW-listed players who currently compete in, or have recently graduated from the NAB League, performed.

There were a number of debutants across the VFL Women’s competition in Round 12, but two of the most anticipated ones were the inclusions of Calder Cannons’ Georgie Prespakis (Essendon) and Tasmania Devils’ Perri King (North Melbourne). The pair went head-to-head in the opening game of the round at Windy Hill, with King coming away with 15 disposals and seven tackles, while Prespakis had the 10 touches and seven tackles. The other Devils running around were Ella Maurer (11 disposals, one goal), Camilla Taylor (five disposals, eight tackles and three hitouts) and Jemma Blair running around for the Roos. The other Cannons donning the sash were Emelia Yassir (11 disposals, four marks and four tackles), Kasey Lennox and Zali Friswell who all gained great experience. Recent Cannons graduate Alana Barba continued her ripping season with 16 disposals, five tackles and two goals, while ex-Bushranger Eloise Ashley-Cooper had the 15 disposals and 11 tackles in the loss.

Port Melbourne had a number of NAB League talents running around, led by best on ground in last week’s grand final, Oakleigh Chargers’ Amanda Ling (10 disposals, three tackles). Her premiership teammate Taylah Morton had her best game at VFLW level with 12 disposals and six tackles, while ex-Bushranger Sophie Locke managed the seven touches, three marks and five tackles in another solid performance. Ex-Eastern Ranges talent Emma Horne was the main graduate out of the NAB League Girls that was VFLW-listed for the Demons.

In Carlton’s upset win over Geelong, Maeve Chaplin played her second VFLW game, joining Northern Knights teammate Tara Delgado and ex-Oakleigh talent Amber Micallef (nine disposals, nine tackles). Tamara Smith put in another good tackling performance of 18 disposals and eight tackles, while ex-Falcon Paige Sheppard had the 17 disposals and eight tackles. Darebin might have gone down in a heavy loss to the undefeated Collingwood, but Northern Knights’ Trinity Mills played her second game for the Falcons.