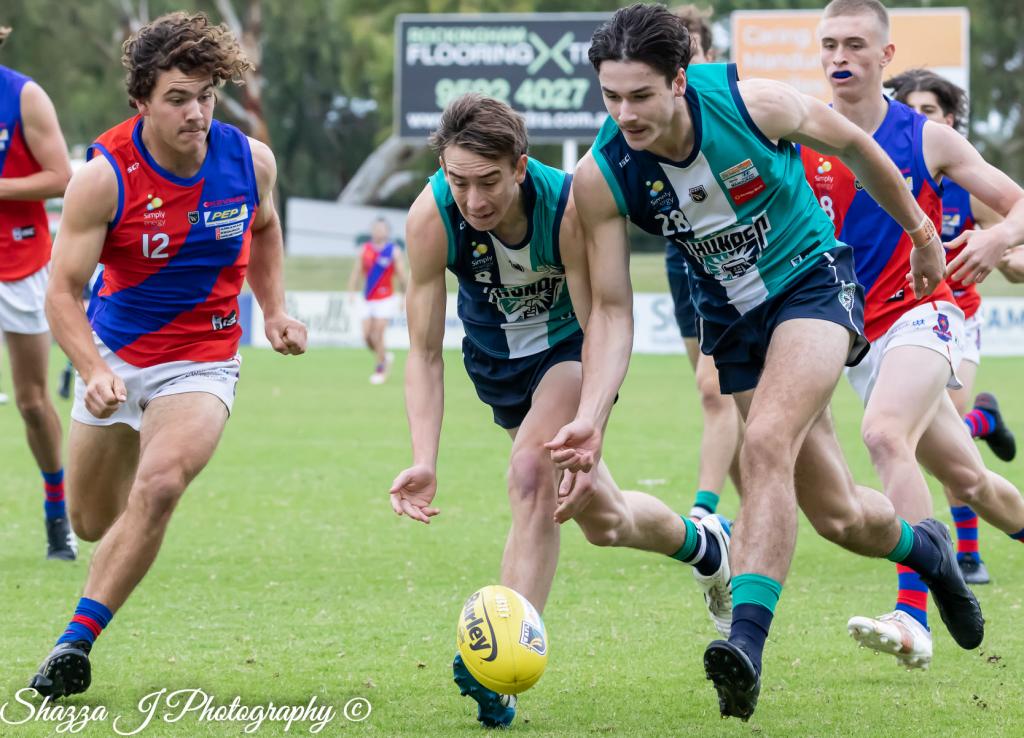 WEST Perth picked up its second win of the 2021 WAFL Colts season on Saturday morning, knocking off Peel Thunder by 36 points in Mandurah. The Falcons proved a class above for much of the day, and broke to an early buffer before being forced to weather a Peel Thunder storm in term two.

After the Thunder snatched a momentary lead with three quick goals, West Perth took over the territory and possession to register six unanswered majors across the second and third quarters, keeping Peel scoreless until early in the final period.

The Falcons’ dominance showed on the scoreboard with 29 scoring shots to 13 in the even six-goal margin, as well as figures of 47 inside 50s to 23 across the one-sided contest. Peel could not quite find an answer to the onslaught, though both sides remain in the same ladder positions after the 10.19 (79) to 6.7 (43) result.

Arguably the best player afield across four quarters, Kitchingman showcased some eye-catching traits as a small midfielder. His evasiveness and turn of speed away from the stoppages proved menacing traits for the West Perth midfielders to combat, as the 19-year-old zipped through traffic and into space. His sidestepping ability was top notch, proving another means for Kitchingman to buy time before assessing his options and delivering by foot. He was the leading ball winner on the day with 31 disposals, accumulating as the game wore on and dropping back well to help provide some spark out of Peel’s besieged defence. He capped his day with a one-handed screamer in the final term – one for the highlight reel.

Part of Western Australia’s plethora of promising draft eligible talls this year, Polson moved like a prospect well below his 196cm standing. The Peel bigman worked hard up the ground to present on the wing, where he would provide a viable target down the line. While his height suggests that would purely be in a marking sense, Polson arguably did his best work at ground level as he mopped the spills and moved with great agility into space. His ability to compete aerially, keep his feet, and then recover the ball was superb, leading to some nice showings of skill in his disposal. Polson even attended some stoppages late in the piece, but looked to have his day cut a little short after limping off in term four.

Jackson Klepzig and Scott Tuia were productive members of Peel’s midfield-forward rotation, as was state Under 19 trial game participant Brady Hough, who steadily built into the contest. 16-year-old ruck Jackson Broadbent showed plenty both at the contest and around the ground, with Joshua Edwards yet another strong tall in the Thunder side. Elsewhere, Cooper Osbourne played a tricky role down back, before being swung into attack during the final quarter and snaring two goals.

While this was not Fleiner’s most productive day stats-wise, he managed to build into the contest nicely and provide that trademark dash on the outer. Starting in his usual defensive post, the rebound runner read play well to time his movements to the wing, providing an option in space as West Perth looked to transition the ball from the corridor. His perpetual forward motion was a handy feature for the Falcons in what was a largely contested style of game, with Fleiner’s knack of hitting targets at full flight also helping to maintain positive momentum. His willingness to compete both aerially and at ground level, when required, was also impressive.

Paton is a midfielder with terrific balance, able to showcase class with ball in hand but also do the tough stuff defensively. In this outing, his hard tackling was a real feature around the stoppages, with each proving that bit more punishing than the last. He thrived amid the contested flow of the game, getting stuck in at the coalface with clean hands and using his turn of speed to burst onto the outer. Speaking of, Paton was one who rotated into the centre bounces off the wing early on, but looked quite comfortable in the thick of things as a reliable ball winner. His skills were usually sound, even on the move, and the midfielder capped his day with a sharp bit of play to snap his lone goal for the game, during term four.

Arguably the most prominent forward afield, Cox got busy both inside attacking 50 and up on the precipice for West Perth. He scuppered a trio of goal attempts during the opening quarter, but redeemed himself in the following period with two goals in a minute, helping the Falcons overturn Peel’s momentary lead. Cox presented nicely up to half-forward and looked to wheel his side into dangerous positions, with his scores reward for that kind of effort. He had a few more tries on goal in the second half and did not look totally confident in taking set shots, but finished the game with a productive 2.4 from 13 disposals and five marks.

The 19-year-old midfielder made a terrific start, proving strong over the ball and using his power to good effect at the contest. On multiple occasions, he was able to burst free of would-be tacklers and out of congestion, helping West Perth break forward quickly with force. Dixon generated positive forward momentum but did not simply blaze away in possession, able to lower his eyes well and hit targets by foot on the move. He was a touch quieter as the game wore on but made his mark in the early stages – including with a highlight reel snap from the boundary, roving the forward 50 stoppage with aplomb.

Skipper Luke Reilly again set the tone for West Perth and got his hands on the ball, while Luke Michael was a reliable figure off half-back and Brock Lewis also got busy in the Falcons’ win. Up forward, Zarne Robis presented nicely and showed good skill by foot, finishing with two goals as Tyler Mouritz showed his wares as an intercept marking defender to watch.

Claremont got up by four points in a tense encounter with East Perth, with star key forward Jacob Van Rooyen returning to the Colts grade. He booted three goals in the Tigers’ win as he continues to work back steadily. For the Sharks, Joshua Browne ran rampant in midfield with 37 disposals, while bottom-ager Jed Hagan had it 28 times from half-back, and promising tall Jack Williams booted a goal from his 17 disposals and five marks, also rucking for 14 hitouts.

Jacob Plunkett (six goals) and South Fremantle dined out on the winless Perth in a 57-point victory at Lathlain Park, with Chase Bourne (four goals) also getting in on the act. Deklyn Grocott led all comers with 23 disposals for the Demons, but he and his side faced stiff competition from the Bulldogs’ strong engine room and rampant forward targets.

Swan Districts were the other winners in Round 7, holding on to defeat Subiaco by eight points. Small midfielder Max Chipper accumulated another 38 touches in Swans colours, with Benjamin Hewett (31 disposals) again proving a handy fold for the running ace. Subiaco star Neil Erasmus was matched by Jacob Evitt on a team-high 27 touches, as Swans’ Joshua Middleton (two goals) was the game’s sole multiple goalkicker.