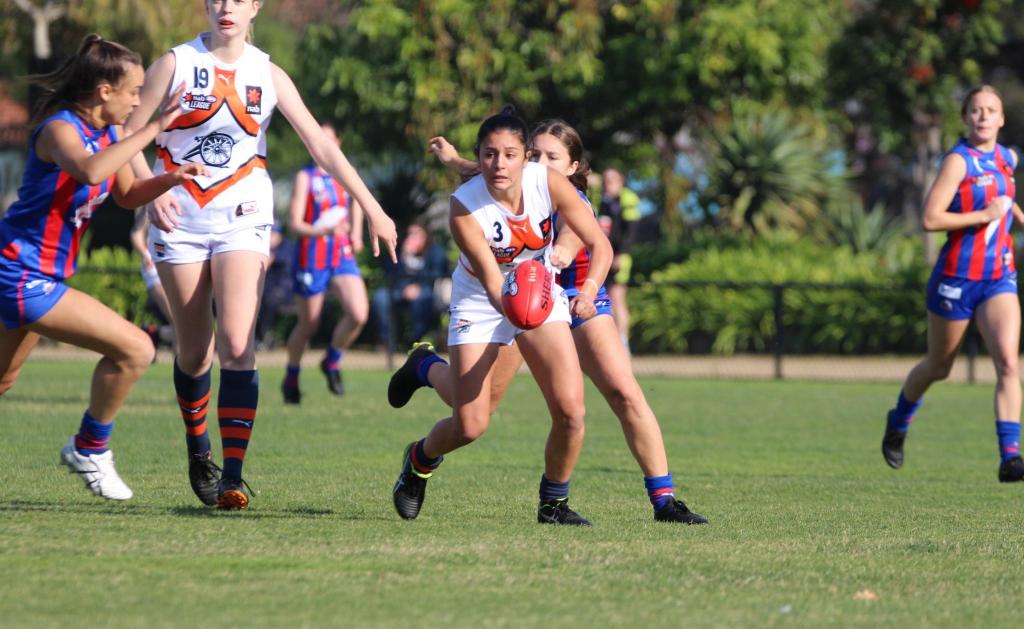 NEXT up in our NAB League Girls team review series are the Calder Cannons, a typically strong region which again fielded a bunch of strong top-agers, and have some talent on the way up. We recap the Cannons’ season, and take a look at some of the top performers across those various age groups.

A highly touted team coming into the season, Calder started as it meant to go on with a 16-point win in its opening fixture, against Sandringham. While the Cannons were shocked on home turf by eventual premier Oakleigh in their next outing, three-consecutive wins got their season well and truly back on track. A win against Western was Calder’s sole triumph in its final four outings though, with a second defeat at the hands of Oakleigh spelling an end to their campaign in the elimination final stage.

Well known for her work as an intercept marking defender, Crowley was able to swing up the other end with great success a few weeks into season 2021. She translated a similar aerial dominance to her forward craft, presenting as a dangerous option up the ground and linking Calder into attacking 50. She was also utilised in that role for Vic Metro, showcasing a good amount of potential with her flashes of brilliance in each game.

Friswell quickly became one of the competition’s most consistent midfield performers, combining well with the stars in Calder’s engine room to provide solid ball winning power and defensive work at the stoppages. A no frills type of talent, the 17-year-old ticked over 20 disposals in each of her last three outings. She has been tried in a couple of different roles for Essendon VFLW and Vic Metro, but looks most at home among the centre bounce rotation.

Pegged as one of the most promising key position options coming into the season, Gillard was another to hint at her potential as she waxed through the ruck and forwardline in 2021. She was difficult to beat in the ruck due to her sheer height, and proved just as potent aerially in her time up forward – showcasing good contested marking ability. Her athleticism is another big tick, and it is easy to see why she was selected in this year’s AFLW Academy intake.

Arguably the best player available in this year’s draft pool, Prespakis enjoyed another stellar season in Calder colours, as captain. Having already set a ridiculously high standard, the midfielder was able to meet it each week and was a reliable asset at each level she played. Her understanding of the game and ability to win the ball is unmatched, with the defensive acumen to go with that penetration going forward. She is a superstar in the making and will quickly shake the ‘Maddy’s sister’ tag – if she hasn’t already.

Another important and constant figure in Calder’s midfield mix, Yassir was the speedy ground level type who helped set her side on the front foot with good run-and-carry away from the contest. A tough competitor, the 17-year-old is also not afraid to compete for and win her own ball, but benefitted from being released onto the outer via hand. In seven of her nine outings, Yassir notched over 15 disposals and that form was more than enough to warrant Vic Metro selection.

A bottom-ager who was selected in both the Vic Metro Under 17 and Under 19 squads, McDonald rose to the standard well with competitive efforts in a few roles. Around the ball, she can extract for herself or be released on the outer, while also offering good defensive efforts in the way of hard tackling. Depending on how many are drafted from the current crop, McDonald should slot straight into Calder’s permanent midfield mix in 2022.

Sutton is a lively type who brings great speed and pressure to the contest. Her ability to break forward or make things happen at the fall of the ball proved handy traits in Calder’s midfield-forward rotation, with her manic defensive pressure another desirable trait in both positions. Sutton should be set for even more time in the engine room going forward, and was part of Vic Metro’s Under 17 squad this year.

Complementing a strong brigade of inside ball winners, Mali McLeod showed great class on the outer. Peppa Poultney proved solid fold for Gillard in the ruck, while Kasey Lennox was a mainstay down back and Alisa Magri finished as the region’s top goalkicker (10) up the other end. Olivia Manfre was one who rotated forward from midfield, while Tahlia Read put her hand up as another to watch for the future.