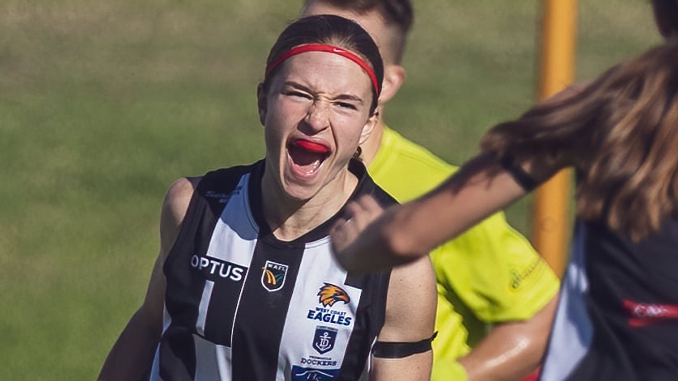 SWAN Districts have remained undefeated by the slimmest of margins in the West Australian Football League (WAFL) Women’s competition, with their 12th win of the season coming by just one point, as Subiaco fell just short of an upset. In a low-scoring affair, the ladder-leading Swan Districts looked in serious danger of dropping their winning streak, as Subiaco pushed the ball into their forward line countless times. It took a desperate tackle from Aimee Ralph at centre half-back to seal the result and break the hearts of Subiaco coaches, fans and players.

The first term opened in exciting fashion, with teams exchanging goals in the opening minutes of the game. Swan Districts’ Bianca Webb snapped a magnificent goal to open the scoring for the match, but it was soon answered through Subiaco’s Hayley Corlett who kicked a composed goal despite pressure from opposition defenders. The contest was scrappy, with Subiaco not backing down from the league powerhouse, and matching them in every contest. There were big hits, brilliant tackles and gutsy marks as the sides entered the first break separated by just one point. The scoring continued into the second quarter as each team went back and forth with their scoring. An Abbygail Bushby goal put Swan Districts up, but Subiaco responded almost immediately through Holly Hyder. Subiaco even gained the lead through a brilliant Kia Buckley goal, as she burst through two tackles to kick a fantastic snag to put her side in front. This wouldn’t last as Emma Nanut kicked her first goal of the day to regain the lead for Swan Districts. These would be the last goals scored for the day, as the rain appeared and suddenly it became a territory battle.

The second half was a scrappy contest, with neither side gaining a significant advantage. It was all about gaining ground, and while either side had ample opportunity to hit the scoreboard, these were ultimately squandered. It was a one-point game right up to the very end of the game. Subiaco made one final push forward, but Swan Districts’ defence proved too strong, and they claimed the win soon after.

For Swan Districts, Webb was damaging all day, popping up all over the ground to produce significant impact for her side. Her opening goal was crucial in kickstarting Swan Districts’ day, and she continued to put pressure on all day, hassling opponents into making vital mistakes. She was well-assisted by midfielder Dana East who continued her strong season with another impressive outing. For Subiaco, forward Holly Hyder was fantastic, fighting tooth and nail for the ball whenever she could and constantly providing an option for teammates.

Swan Districts will attempt to keep their undefeated season rolling as they take on East Fremantle at Steel Blue Oval on Saturday, while Subiaco will host Peel Thunder on Saturday evening.

Around the grounds, Peel Thunder proved too strong for South Fremantle, claiming a 24-point triumph at David Grays Arena on Saturday evening. Both sides were hurt by inaccuracy, and Peel Thunder were just too powerful for too long. For the victors, Kira Phillips was once again dangerous up forward, booting three goals, while teammate Sabreena Duffy impressed. For South Fremantle, Tahlia Holtze fought hard all day in tough conditions.

Moving to New Choice Homes Park, East Fremantle have kept themselves in the finals hunt with a 21-point upset over Claremont on Sunday afternoon. East Fremantle dominated all day, as Claremont struggled to keep up, and fell well short of a comeback. For the winning side, Emily Burton was the star, dragging her side to a strong win, while Jessica Low was Claremont’s best on a difficult day.