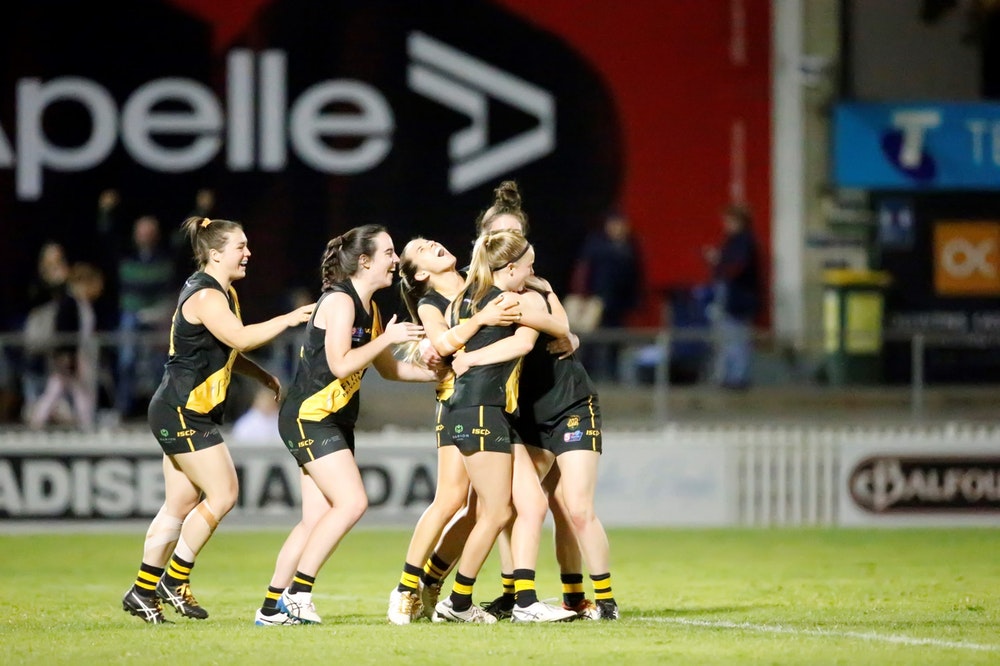 GLENELG has booked its spot in the 2021 South Australian National Football League (SANFL) Women’s Grand Final after knocking off minor premiers Norwood by 23 points, forcing the Redlegs to cash in their second chance to face a West Adelaide side that fought off South Adelaide by less than a kick for the second consecutive week. With the Panthers bowing out, it meant the Redlegs are the other remaining side with a flag to their name, as both Glenelg and West Adelaide chase their first premierships in the competition.

Glenelg is through to its first ever SANFL Women’s Grand Final with its first ever finals win, defeating minor premiers Norwood by 23 points in a tight struggle for the majority of the contest. Despite eventually winning by 23 points, as late as three quarter time the Bays were just five points ahead, with both sides kicking goals through Erika Sporn (Norwood) and Caitlin Gould (Glenelg) cancelling each other out. Once the final term rolled around, an early major to Meara Girvan gave Glenelg some breathing space, before Caitlyn Swanson sealed the deal, and Jess Searle put some icing on the cake in the final few minutes to win, 4.7 (31) to 1.2 (8).

Glenelg dominated possession with 40 more disposals and a whopping 30 more inside 50s (41-11), though full credit must go to the Redlegs defence, which held up well considering, picking up 37-10 rebounds 50s. Glenelg also won the hitouts (31-25) and dominated the clearances (28-19), showing why the Bays could well be the premiership favourites.

West Adelaide moved through to its second consecutive preliminary final, defeating two-time premier and reigning grand finalist South Adelaide by four points in a thrilling contest. Melanie Elsegood was the hero for the Bloods, kicking a goal late in the match to win the game, getting West over the line in a fitting rematch to the week before when the Bloods won by a solitary point. The teams were neck-and-neck throughout the contest, with Sarah Dargan and Jordann Hickey both kicking goals in the final term for the Panthers to lead by three points with just four minutes on the clock. Ailish Considine missed a chance, but with just over a minute to go, Elsegood became the hero, slotting the winning goal and sending her team into the preliminary final.

The team statistics were fairly even in terms of ball-winning, with the Panthers having 20 more marks (40-20) and 11 more tackles (82-71), though West completely dominated the clearances (33-16) despite losing the hitouts (23-34). The Bloods also had 20 more inside 50s (34-14) in what theoretically should have been a more convincing win, but the Panthers defence was steadfast with 29-11 rebound 50s.

West Adelaide now advance through to the preliminary final to take on Norwood with the winner to lock horns with Glenelg the week after in the grand final.