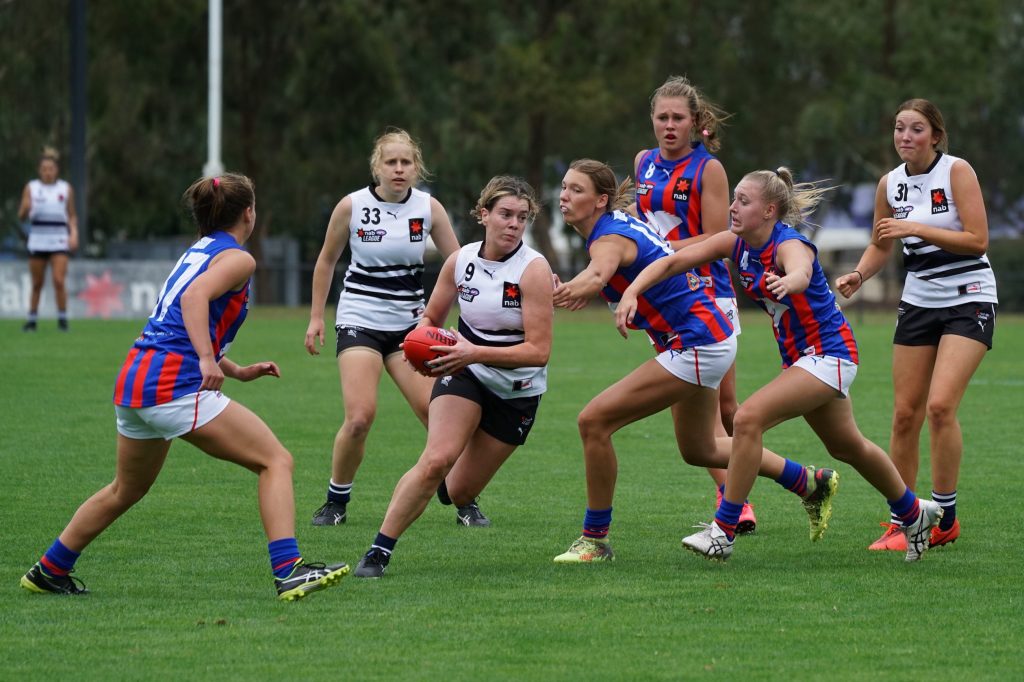 NEXT up in our NAB League Girls team review series are the Northern Knights, the 2019 premiers who came in defending their crown with a very new-look squad. We recap the Knights’ season, and take a look at some of the top performers across the various age groups.

The Knights were handed an absolute thumping in their first outing for 2021, going down to eventual premier Oakleigh by 62 points. The pieces were picked up in quick time though, as Northern opened its account with consecutive wins over lowly sides – including a season-high 72-point victory over Gippsland. The Knights waded through a tough stretch of games to close out the campaign with a mixed bag of results, toppling the likes of Eastern, Geelong and Dandenong, but going down to another couple of finalists in Calder and Tasmania. Come finals time, Eastern exacted revenge with a 28-point win to see an end to Northern’s premiership defence.

One who was arguably unlucky to have missed out on being drafted last year, Chaplin returned as a top-ager and was consistently Northern’s top performer when afforded a clean run at it. Injury saw a couple of outings cut short, but the strong ball winning midfielder showcased her class in possession and also reverted back to her old defensive post at times. She also played across half-back for Vic Metro during the Under 19 championships, proving up to the level with her reading of the play and outstanding composure.

Delgado was a pillar in Northern’s defence for most of the year, able to take on the opposition’s best forward one-on-one or be set loose to intercept and spark rebounding forays. She was often tasked with taking the kick-ins and boasts a booming boot, which saw the Knights clear their lines time and time again. Like Chaplin, Delgado went on to represent Vic Metro and the pair have also turned out for Carlton’s VFLW side this season.

One of the leaders of this side, Smart was a reliable figure through midfield and often dug in to set the tone at the source. The 18-year-old was also able to get her hands dirty with an average of 4.9 tackles per game, working hard both ways as Northern began to build into the season. She was also able to find the big sticks in the final two regular season games, finishing with consecutive two-goal hauls to cap off a solid campaign.

Hurst was one who built into the season well and ended up showing her wares as one to watch for the future. The 17-year-old proved an easy selection each week among the backline, providing good drive off half-back and showcasing desirable traits in that role, with potential to move further afield. She was also a Vic Metro Under 17 representative, credit to her NAB League form.

Already one of the region’s standout players with two seasons left in the system, Jordan was a mainstay in midfield and one of Northern’s more consistent performers. There may not be much of her, but Jordan is hard to miss as she weaves out of the contest with class and puts the Knights on the front foot. Arguably her best performance came in Round 6 against Eastern, as she helped drag Northern to a remarkable comeback win with two goals from 24 disposals. Another early Vic Metro representative, she is a star in the making.

Plummer is another bottom-ager who locked down a clear role in Northern’s lineup and played it well each week, making the wing her own. Still only 16, Plummer proved she was up to the level in 2021 with a string of consistent performances – only dropping below 10 disposals once in eight appearances. She proved a good driver of the ball going forward and should again play an important role for Northern next year.

AFLW Academy member Maykayla Appleby showcased her trademark dash on the wing and off half-back, as another Vic Metro representative. The forward trio of Megan Girolami, Ella Smallacombe and Trinity Mills proved productive for much of the season, while the likes of Lulu Beatty, Rylie Wilcox, and Phoebe Nelson will be ones who can play key roles again next year.