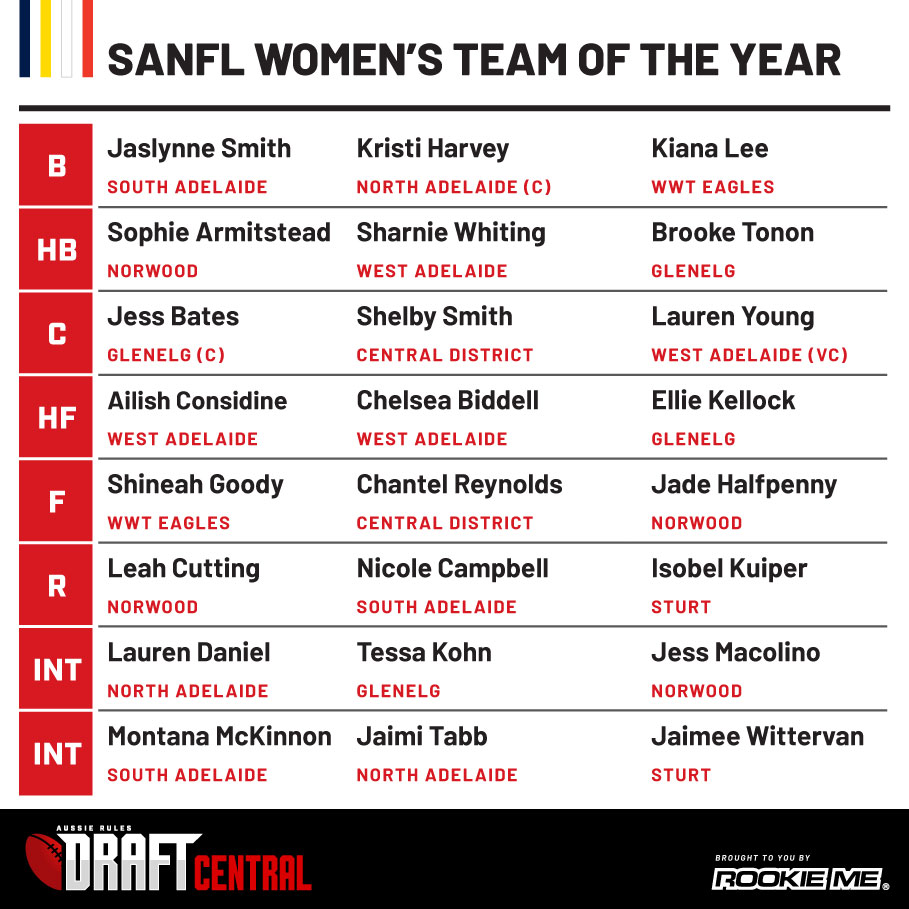 DRAFT Central’s 2021 South Australian National Football League (SANFL) Women’s Team of the Year is in, with the 24 players and three emergencies selected from the initial 44-player squad. A total of 20 players had four or more Team of the Week nominations that were eligible under the five-game minimum criteria, with an additional four players included that had three nominations.

It is somewhat fitting that the three remaining teams in the title race for the 2021 SANFL Women’s premiership have the equal most representatives with four players apiece. Norwood, Glenelg and West Adelaide all have a quartet of representatives, while losing finalists South Adelaide and fifth placed North Adelaide have three players each. The bottom three sides, Central District, Sturt and Woodville-West Torrens finish with two representatives apiece.

The 2021 Draft Central SANFL Women’s Team of the Year sees two co-captains and a vice-captain named after the trio of players had eight Team of the Week nominations. Glenelg’s Jess Bates and North Adelaide’s Kristi Harvey were named on the wing and full-back respectively, and share the captaincy duties, while West Adelaide teenager Lauren Young‘s sensational year has seen her earn the vice-captaincy role slotting onto the other wing.

The midfield is stacked with some high-nominated talents, with Norwood ruck Leah Cutting (seven) palming it down to the likes of South Adelaide’s Nicole Campbell (seven) Central District captain Shelby Smith (six) and Sturt’s Isobel Kuiper (five) in a hardened inside midfield group. Joining Harvey on the last line are South Adelaide’s Jaslynne Smith and Woodville-West Torrens’ Kiana Lee, while experienced Norwood utility Sophie Armitstead has been named at half-back, with youngster Brooke Tonon on the other back flank.

Up forward, it is a mix of youth and experience with Adelaide Crows’ listed players and West Adelaide’s Chelsea Biddell and Ailish Considine at half-forward. Joining them is Glenelg’s Ellie Kellock, whilst Central District’s Chantel Reynolds earned the full-forward spot. Either side of her are a couple of teenagers in Norwood’s Jade Halfpenny and Woodville-West Torrens’ Shineah Goody, making it an exciting and dynamic forward line.

Looking to the bench, a couple of North Adelaide midfielders in Jaimi Tabb and Lauren Daniel are among those earning spots in the squad, with Montana McKinnon the backup ruck to Cutting. Glenelg onballer Tessa Kohn is also on the interchange, with Norwood mid/forward Jess Macolino rounding out the team. In terms of emergencies, State Academy members Zoe Prowse and Zoe Venning both make the additional three-player spots, with Central District’s Caitlen Teague also rewarded for a fine season.