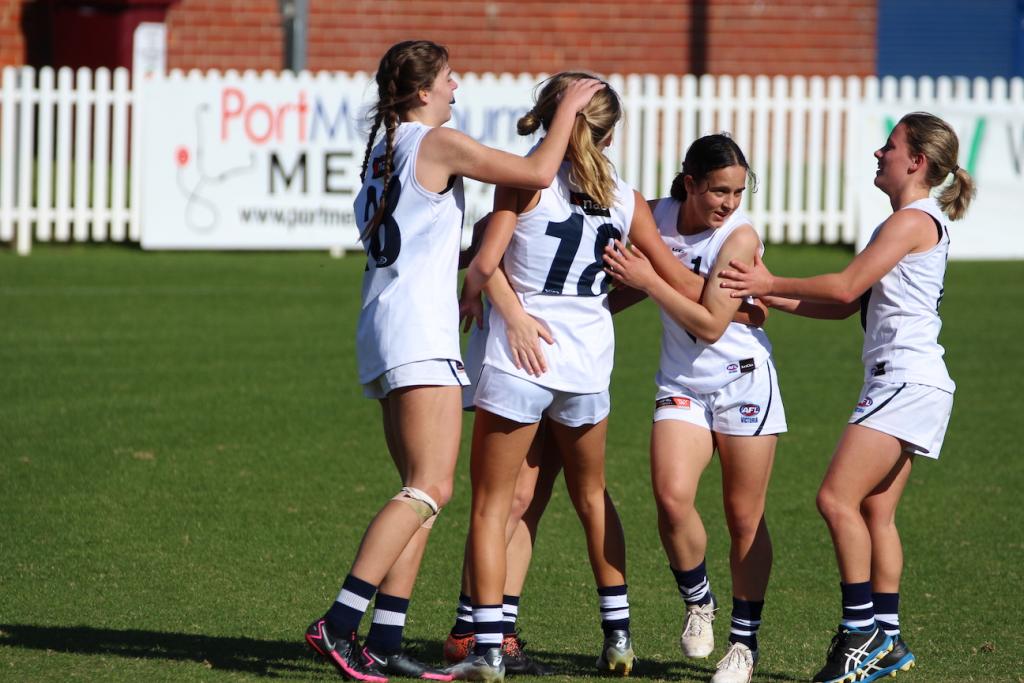 IT was a clinical four quarter performance from Vic Country, never taking the foot off the pedal on their way to a 76-22 triumph on Sunday afternoon in the winners’ final game of the AFL Women’s Under 19 Championships. Breaking away in the second term, Country were dominant on all facets of the ground, maintaining control of the ball for majority of the game, and were given free reign for most of the contest. There were brilliant goals up forward and their back six were as solid as you could ask, as they constantly found a way to extract the ball and thwart Queensland attacks.

The game started in seriously contested fashion, with neither side able to break free. The ball lived in the 50m arc for either side, with each fantastic play of transition football followed up by scrappy, hard-fought contests. The drought was broken by Tahlia Meier, who booted VIC Country’s first goal. They say good things come in twos, as Country kicked their second shortly after through Zoe Garth, and suddenly Queensland found themselves on the back foot. Queensland were able to conjure a response through Imogen Evans, and suddenly the momentum looked to sway the other way. The game remained contested, until a late goal on the run from Paige Scott saw Country take a handy lead into the first break.

The remainder of the game was dominated by Country, as they never gave their opponents enough of the ball to hurt them on the scoreboard. In the midfield, the battle was even for a lot of the time, but it was Country’s ability to rebound from the defensive 50 that hurt the opposition. Queensland entered the game with an extremely tall defence, and this was an advantage early in the game, with plenty of long bombs cut off. Country quickly adapted to this, as they constantly lowered their eyes when entering the forward line to great effect. The final quarter saw a slight fightback from Queensland and they ended up producing an equally as effective fourth term, but the final margin still remained at 54 points.

Defender Jaide Anthony was fantastic all day with 19 disposals from the backline. Her spread from contests was something to marvel, as she was constantly an outlet option for her side, finishing off a remarkably consistent 2021 campaign. Up forward, Meier booted three goals in a strong outing, while Scott was dangerous all day. Aurora Smith (15 disposals, two clearances and three inside 50s), Chloe Leonard (14 disposals, seven tackles and four rebound 50s) and Octavia Di Donato (12 disposals, four marks, two inside 50s, two rebound 50s and two goals) were also among Country’s best.

While Vic Country’s AFLW U19 Championships come to close, Queensland face off against Vic Metro in the final game of the carnival next Saturday at Metricon Stadium from 10:45am.