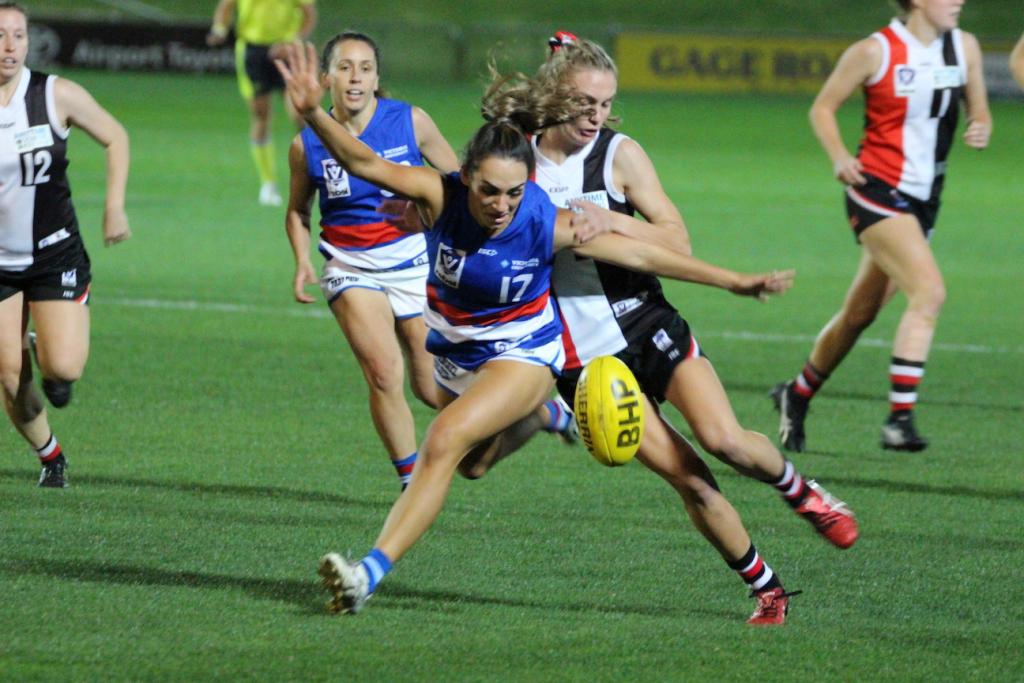 THREE rounds remain and some results could ultimately determine finals spots, with last chances in play for a couple of teams, and a top against bottom clash featuring this weekend in the Victorian Football League (VFL) Women’s competition.

Potential top pick Georgie Prespakis has been named for Essendon in a game where the Bombers can lock up a finals spot, and snuff out North Melbourne’s chances at the same time. The Roos will make history with a record 11 Tasmanians in the side, and a debutant in fellow AFL Women’s Academy Perri King making her debut at VFLW level against Prespakis. Joining King in the side for their second games are Ella Maurer and Jemma Blair at opposite ends, whilst fellow Tasmanians, Sarah Skinner and Meagan Kiely make it a distinct Apple Isle feeling through the middle. They will have a huge job containing the midfield combination of Prespakis, Georgia Nanscawen, Alana Barba and Eloise Ashley-Cooper of whom the latter trio have been in great form at the level. The forward line of Daria Bannister, Meg Sinclair, Camilla Taylor and Mia King adds to the Roos’ Tasmanian presence, with Calder’s Kasey Lennox, as well as Zali Friswell and Emelia Yassir up the other end among the talented juniors running around in the red sash.

CASEY DEMONS vs. PORT MELBOURNE
Saturday, May 22 @ 10:30am
Casey Fields

Fresh off a best on ground performance in the NAB League Girls Grand Final, Amanda Ling will run out for Port Melbourne in the Borough’s clash with fellow finals-bound side, Casey Demons. The Oakleigh Chargers midfielder will join AFL Women’s talents Katherine Smith and Kodi Jacques, and past AFL Women’s talent Mel Kuys in the midfield, up against an equally stacked onball brigade of AFL Women’s midfielders Megan Fitzsimon and Casey Sherriff, and ball-winning star Eliza West. The Borough have other youngsters including Oakleigh Chargers’ Taylah Morton and ex-Murray Bushrangers talent Sophie Locke in the forward pockets, whilst the Demons have a stacked outfit including AFL Women’s stars Eden Zanker and Libby Birch, and young guns Brenna Tarrant and Eliza McNamara. Potentially the match of the round, both these sides are coming off disappointing losses, and both will be keen to make amends against quality opposition.

Following an upset win over Casey Demons, Carlton return home to Ikon Park against a Geelong side that cashed in its get out of jail free card in the final term last week. The Cats were in real danger against the Southern Saints, but managed to step up with four late goals to get over the line in fantastic style and remain in the top two. This week they take on a Carlton side that is as strong as it has been all season, featuring a core midfield of Lucy McEvoy, Abbie McKay and Grace Egan, as well as Maddy Guerin and Daisy Walker. Northern Knights’ full-back Tarrah Delgado will make her VFL Women’s debut with the Blues, joining teammate Maeve Chaplin in the side, in what will give the consistent talents a good run at state league level. For the Cats, the AFL Women’s midfield of Rene Caris, Darcy Moloney, Laura Gardiner and Sophie Van De Heuvel is unbelievable, while Olivia Barber has built some great form this season, and the likes of Tamara Smith and Paige Sheppard are also playing well at the level. Expect Geelong to really step up here, but the Carlton midfield is just as good making there plenty of terrific head-to-heads to watch.

A top against bottom clash featuring Darebin Falcons and Collingwood at Bill Lawry Oval has the potential to be one-sided, but the Falcons will be hoping that a draw against Williamstown has helped build some momentum into the game. Collingwood are rotating through their AFL Women’s talent, and Chloe Molloy, Elise O’Dea and Stacey Livingstone both play their first VFLW games this season, whilst Jaimee Lambert is back for her second game of the year. The Magpies team looks stacked and should be too strong for a Falcons outfit, though Georgia Hammond comes back into the club as the tall target up forward, forming with Samara David, Stephanie Simpson and teenager Trinity Mills. Jess Dal Pos is the prime mover in midfield and could have a tantalising head-to-head with Molloy in there, while Sidney Cubasch will look to take control in the ruck. The Falcons have some good experience in there including Nicole Callinan, but expect the Magpies to have too much depth across the field.

In the first of two matches on Sunday, Williamstown hosts Hawthorn in a huge Sunday morning clash at Downer Oval. The Seagulls are coming off a draw with Darebin, whilst the Hawks had their wings clipped by North Melbourne at Box Hill last week. Coach Bec Goddard just keeps finding AFLW talent to slot into the lineup, and this week Sarah Perkins returns to the club having missed the second half of the AFLW season due to injury. The key forward will team up with Chantella Perera and Kristy Stratton, whilst Jessie Williams has been a damaging goalkicker all season. In defence, Meg Hutchins announced she would hang up the boots at the end of the season, meaning the versatile legend will likely have just three games remaining in her career. Alison Drennan, Georgia Bevan and Nadia von Bertouch are among the other AFLW experienced talents running around in the brown and gold, while Eastern Ranges’ Keeley Sherar, Bridget Deed and Eloise Chaston retain their spots in the side. The Seagulls have some GWS GIANTS talents such as Emily Pease and Lisa Steane, whilst Sydney Swans Academy member Jess Doyle will look to hit the scoreboard alongside Gold Coast’s Bess Keaney up forward. Erin Meade and Aimee Whelan are in good form this year, with Elizabeth McGrath set to have a great contest with opposing ruck Tamara Luke. Hawthorn should win this game, but no doubt the Williamstown breeze will make life difficult in front of the big sticks.

The final match of the round is the most important for the league as a whole, with the result potentially determining the finals series. Southern Saints hold sixth spot as it stands, but are only percentage ahead of the seventh placed Western Bulldogs. In reality, that percentage will be too difficult to make up for the Bulldogs or other chasing sides, so as long as the Saints win two of the last three – playing North Melbourne and Carlton in the final two rounds – they will get there. The Bulldogs can temporarily grab sixth spot with a win here, though they would need to knock off Casey Demons and Collingwood in the final fortnight – or hope the Saints lose to one of the other teams – in order to stay there. The Saints are not mucking around with a number of elite young talents through the midfield including Tyanna Smith and Georgia Patrikios – the latter of whom returns for her first VFLW game this season. Molly McDonald has been named off half-back, whilst Tarni White makes her VFLW debut for the Saints. All things considered the midfield battle will decide the result, with the Bulldogs having Jess Fitzgerald, Britney Gutknecht, Isabelle Pritchard and Elisabeth Georgostathis running around. Molly Denahy Maloney returns from injury to start in the ruck, whilst full-back Simone Ruedin has been named at full-forward, and forward Danielle Marshall has been named at full-back. Western Jets quartet Caitlin Sargent, Jemima Woods, Stephanie Asciak and Nikita Wright will provide the NAB League Girls factor, with the Saints focusing on VFLW talent for this game, such as the in-form Tara Bohanna, whilst Jayde Van Dyk makes her debut in defence for the red, white and black. This game could go down to the wire, and will have plenty riding on it.