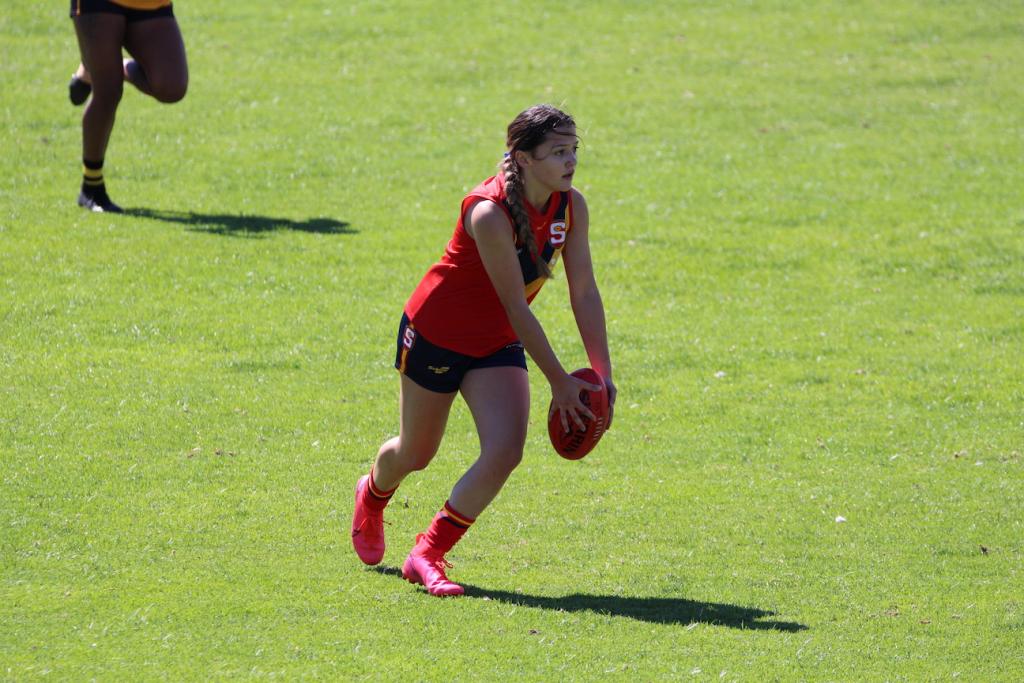 UNLIKE many of her teammates at the 2021 AFL Women’s Under 19 Championships, Laitiah Huynh is no stranger to playing on the national stage at the oldest junior age group. The Central District product ran out for the Central Allies back in 2019 when she was a bottom-ager, and now as an over-ager – in her 19th year – Huyhn was back again, this time pulling on the South Australian standalone jumper.

In 2021, Huynh had a ripping start to the South Australian National Football League (SANFL) Women’s competition, and then in her first return game for her state, turned it on against Western Australia to be one of the best on the field. Even in the Croweaters’ loss to Vic Country, Huynh was again lively in what was an exciting carnival for the talented forward. In describing her form, the Bulldogs small said her start to the SANFLW season was certainly a highlight.

“(I) definitely started off better than I am now, I guess throughout the SANFL,” Huynh said. “But I think it’s because I’ve mainly been focusing on State, my performance at State. “So that within the State games I’ve performed pretty well.”

Despite having that experience of representing her state multiple times with a COVID-19 pandemic in between, Huynh has not been a career-long footballer, having crossed from basketball five or six years back.

“It’s been a bit of a shorter experience compared to some of the other girls because I didn’t start off playing footy,” Huynh said. “I started off playing basketball. “I only played footy back in 2016 or 15. “I started local club then went into state teams and then now playing SANFL obviously and state.”

Deployed as a high-half forward who rests in the pocket, Huynh said her position allows her to exploit some of her key traits such as her speed and athleticism.

“I reckon it definitely does (exploit key traits) because I’m always running around and I consider myself as a fast player, agile as well so I can get around players as well,” she said.

When it comes to improvements, Huynh said there were always challenges as a smaller player, but something she is constantly working on is her one-on-one body positioning. Having to go up against players who are bigger and stronger, Huynh has been developing ways of winning contests that play to her strengths.

“My body position when it comes to different opponents (is an improvement), just adjusting myself so how they work around the ball,” she said. “Especially because I’m smaller I’ll usually get matched up with a bigger person, so I’ve got to make sure I’m aware how to work around that.”

Huynh said she looked up to her parents, especially her mother, who she said have given up plenty to be able to allow her to chase her AFL Women’s dream, and have shown support throughout her entire journey.

“Definitely my parents both mum and dad being very supportive throughout anything I choose to do,” she said. “I guess just especially my mum just her resilience bouncing back from those struggles I can put that into footy scenarios and I’m pretty resilient, strong, things don’t go my way, so that’s pretty good.”

Working two jobs at Peter Alexander and KFC – joking that the latter has turned her off the deep fried chicken – Huynh is also studying criminology at university this year, ensuring that there is always plenty on her plate outside of her football. But on the field, Huynh said she is hoping one day she can join her idols who she looks up to and wants to emulate on the biggest stages.

“I do have a couple of idols, I guess just obviously playing with Teah Charlton and her being a forward as well, I look up to her a lot and my game style,” Huynh said. “But also other players outside of Crows like Georgia Patrikios, I just think they’re brilliant players and I inspire to be like them hopefully one day.”