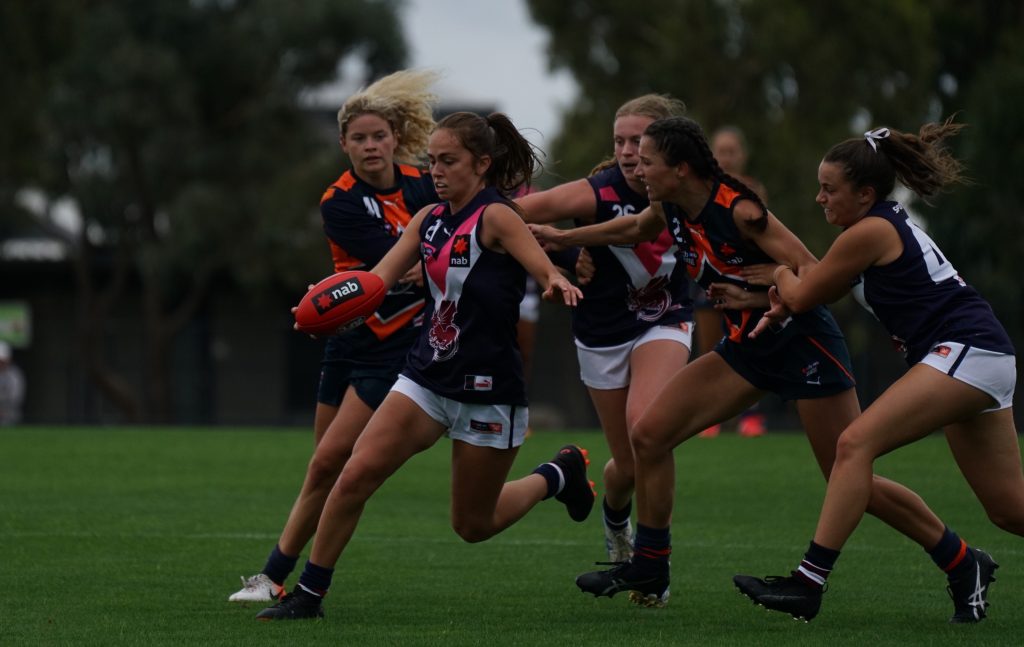 NEXT up in our NAB League Girls team review series are the Sandringham Dragons, a squad which showed plenty of promise despite only notching one win in 2021. Under new head coach Jackson Kornberg, the Dragons knocked off Gippsland Power in Round 5 and lost by just six points to eventual premier, Oakleigh the following week in a couple of their best performances.

Sandringham made a steady start to proceedings, losing out by 16 points to finals fancy, Calder Cannons in Round 1. Consecutive losses by over 30 points followed, before the Dragons broke through for their first win of the season against Gippsland Power in Round 5. The confidence they gained from that result carried on into the next fortnight without the same reward, as they fell short of Oakleigh and Western by a combined seven points. They went into the break on the back of a 49-point loss to Eastern, and rounded out the campaign with a seventh loss, to Murray.

The skipper for 2021, Lynch proved a competitive member of Sandringham’s midfielder before reverting to more of a defensive role. She often looked to set the tone with inside ball winning and hard tackling at the contest, with her combativeness boding well for impact at ground level. Arguably Lynch’s best game came against Dandenong in Round 3, where she collected 19 disposals, laid six tackles and notched 10 rebound 50s. She went on to represent Vic Metro, reward for her effort at club level.

Another competitive player for the Dragons, Ryan arguably showed her best form at representative level with Vic Metro. Her speed on the wing made for passages where she could challenge the tackler and put opposition defenders under pressure, with those kind of athletic traits serving her well in the step up to Vic Metro duties. She proved quite consistent throughout the NAB League season, managing eight touches on four occasions and not dropping below that mark, with her season-high of 15 coming in Round 3.

Tried in a variety of positions, Staltari stood out with her clean hands and ball use while playing on each third. Starting as a high half-back, she proved classy on the ball for Sandringham, before being switched up the other end and through midfield in the run-in to Vic Metro duties. When able to find the goals, she did so in style with kicking usually a key strength of her game and making her one of the region’s most promising 18th-year prospects.

One of the many players competition-wide to make their debut in Round 1, Coyne impressed in her early outings and showed she had little trouble finding plenty of possessions at NAB League level. The small midfielder/forward was a productive member of said rotation, proving clean with her use under pressure and suiting Sandringham’s game style. She was one of four Dragons to make the Vic Metro Under 17 squad.

One of Sandringham’s most promising talents for next year’s draft intake, Hipwell overcame injury early in the season to continue to show her best traits. A tall midfielder among Sandringham’s bunch of medium-smalls, she likes to explode out of the contest with power and take on tacklers, proving a handy point of difference. She also showcased her marking ability around the ground, which should be a handy asset to develop as she becomes a dynamic type.

Potentially already Sandringham’s best player as a bottom-ager, Hurley is a classy midfielder with good speed and consistent ball winning ability. Along with Hipwell, she represented Vic Metro at Under 17 and 19s level, making the step up with aplomb and staking her claim as a top five prospect in next year’s Victorian draft pool. Her ability to weave out of congestion and snatch metres with her pace are top assets, as well as sound ball use by foot.

Ebony Angelopoulos finished as the Dragons’ leading goalkicker (10), proving a lively focal point with her smarts inside 50 – especially when Charli Murphy missed with injury. Murphy found the goals during four of her five outings, including a handful of majors in Sandringham’s only win. Elsewhere, Allies representative J’Noemi Anderson gained confidence throughout the year, while Emma Stuber was a mainstay, and Tayla Jones and Ella Sciberras look like promising options for the future. Top-ager Chloe Saultry also warrants a mention despite only managing three games, along with her Vic Metro squad selection.