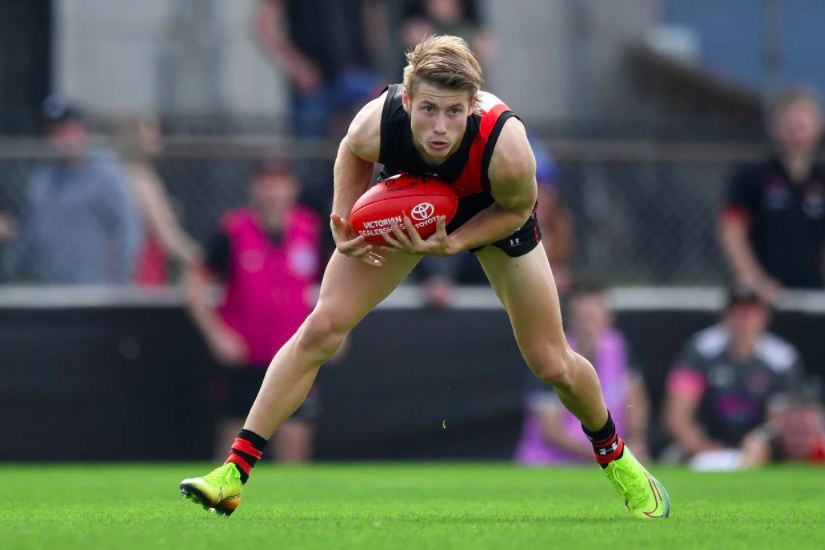 WITH the NAB League in the midst of a month-long break after three full rounds of action, some of Victoria’s most promising Under 19 talent has begun filtering into the Victorian Football League (VFL). A raft of top-age draft prospects have already made their state league debuts, with more to come, while members of all four Northern Academies also get some run in their legs. We take a look at how the prominent 19th-year players performed as they hit the senior football grade.

A Thursday night Q-Clash opened the Round 5 proceedings, as Brisbane easily accounted for its local rival to the tune of 60 points at Metricon Stadium. A pair of 2002-born Lions Academy graduates stole the show, with Will Tasker (21 disposals, five goals) and Toby Triffett (25 disposals, 10 tackles and three goals) enjoying nights out. Tahj Abberley, Charlie Bowes, and Saxon Crozier also found a good amount of ball in Brisbane’s win, as they continue to gain senior experience.

For the Suns, Bailey Reeves‘ consistent run rolled on as he notched another 24 touches and seven tackles, while enigmatic prospect Max Pescud also ticked over 20 disposals and found the goals. Jack Johnston was another 19th-year talent in the side, with the tall taking three marks among his eight touches overall.

Richmond was another side to win big on the weekend, trouncing GWS by 97 points at Punt Road Oval. Big bodied midfielder Fraser Elliot made his debut in yellow and black, ticking up to 23 disposals, as Eastern Ranges product Jake Soligo (17 disposals) also enjoyed his maiden outing. Sam Durham, who featured in the Young Guns game, took six marks among his 19 touches for the Tigers.

In charcoal and orange, star Academy rebounder Josh Fahey racked up 24 touches and six marks in a busy display, while potential mid-season draft prospect Josh Green turned out again and had it 19 times. Another talent garnering similar attention is Patrick Parnell, who made his debut alongside versatile bigman Jack Driscoll for the Giants.

Elsewhere on Saturday, Will Papley earned a berth with Port Melbourne as the Borough went down to Coburg, Marcus Herbert donned the hoops of Geelong once more as Casey beat the Cats in a thriller, and Darby Hipwell had 10 touches in Sandringham’s win over Williamstown. On the same night, Collingwood Next Generation Academy (NGA) talent Youseph Dib was a touch quieter in his latest state league appearance, as highly fancied ruck Ned Moyle managed a game-high 23 hitouts against AFL-listed opposition.

Essendon rounded out the weekend’s action with a solid win over Frankston, which also saw the Bombers field some fresh faces. Calder Cannons teammates Zac Taylor and Josh Goater got their chance to don the sash, with the latter snaring a goal on debut. Bendigo Pioneers top-ager Sam Conforti impressed once again with 22 touches, as fellow Pio’ Jack Hickman had a crack and Western standout Billy Cootee found it 17 times.

With the NAB League set to return this week, involving cameos from each of the Northern Academies, 18th-year players who hit the VFL will likely return to pathway commitments, while 19th-year prospects will stay involved with the state league program or head back to local football, depending on their preferences.