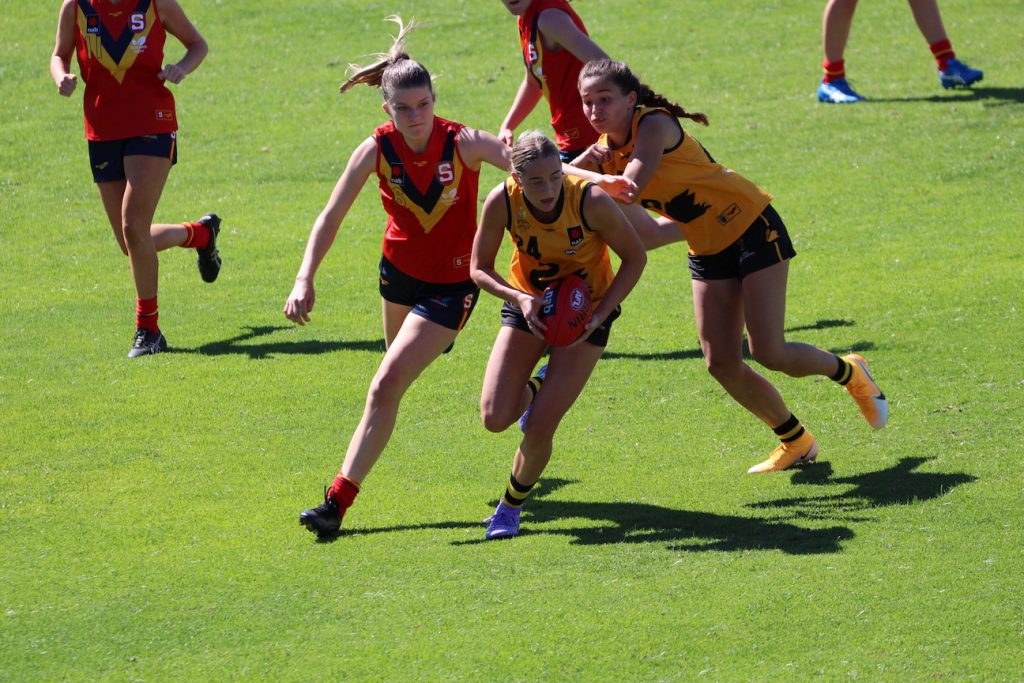 NOT everyone has the honour of representing their state at an AFL Women’s Under 19 Championships carnival, let alone be named as a captain. For Peel Thunder’s Jaide Britton, that honour was bestowed upon her, sharing the role with Swan Districts’ Brianna Hyde. Unfortunately for Hyde, injury ruled her out of the 2021 championships, which meant Britton took the full reigns on-field leading Western Australia to a big win over the Allies, and competitive efforts against South Australia and Vic Metro.

“I’ve been with the State Academy for a couple of years now and it’s always been the perfect environment to grow and mature as a player,” Britton said. “It’s a real honour to be co-captain with Bri (Hyde) this year. “It’s just been really exciting for me because I feel like this has been a year of growth and being a co-captain has really enabled me to grow as my character as well as my player.”

Britton has not always played Australian rules football, having preferred the rounder ball on a court rather than out in the open fields.

“I used to play basketball and netball,” Britton said. “That was pretty much all that I played until a friend asked me to fill in for her team once. “Then from there I really loved it. “I started playing a bit of local club footy and then from there, is where I started playing for Peel Thunder and here I am now.”

The fact she played on a condensed space in those sports makes it somewhat ironic her favoured position is the wing, a role she has thrived with during her West Australian Football League (WAFL) career with the reigning premiers.

“I’m comfortable on the wing, it’s where I’ve learnt my positioning really well and it’s where I’m comfortable playing, but I don’t mind playing a bit off half-back, being thrown inside, playing wherever I am happy to play as long as I’m out there playing some footy,” Britton said.

“I really liked the physicality and the quick pace because it really suited me and how I liked to play, and I really loved the really big team environment, it was really good fun for me.”

Britton was a key member of the Thunder side that under new coach Steve Markham, rose from wooden spooners in 2019 to premiers in 2020, in one of the most remarkable turnarounds in sport. Like anyone involved in the team over the period, Britton has fond memories of the recent success.

“That was just one of the most surreal feelings,” Britton said. “It was really tough for us to bounce back from being the wooden spooners because it’s really hard to keep playing and stay united as a team when you’re just getting smashed every week. “But I was really happy lots of our older girls stuck with us and it was Steve Markham, real credit to him, he turned our team right around and I think once we started winning a couple of games, that fire really ignited within us and we started working well as a team and then from there it was just onwards and upwards, seeing how much potential we really had.”

Having come through the State Academy program, Britton has witnessed a number of past players and friends go on to reach the top level and provide the inspiration she needs with her football.

“I’ve had lots of people who I really look up to, but at the moment lots of AFL players that have come through the Academy too, Mikki (Mikayla) Hyde, Roxy (Roux), Mikayla Bowen, all those girls, it really inspiring to see them come through the same pathway as us and have such a good success in the leagues now,” Britton said.

As for her own personal game, Britton rates her athleticism and endurance having entered the code as a fairly fit player, whilst she is just building little areas of her game to constantly improve.

As for her future goal, Britton understands the competitive nature of getting on and AFL Women’s list and said she would be more than happy to play for any club if need be, but the main focus would be to maximise the potential in her game.

“I think my goal in general is just to reach my potential, see how far I can really go,” Britton said. “Obviously the dream is to be drafted to any club, but if that’s not for me then playing good footy at WAFL I’ll be happy, as long as I’m still playing footy, still healthy and fit, I think that’s just the main goal long-term.”