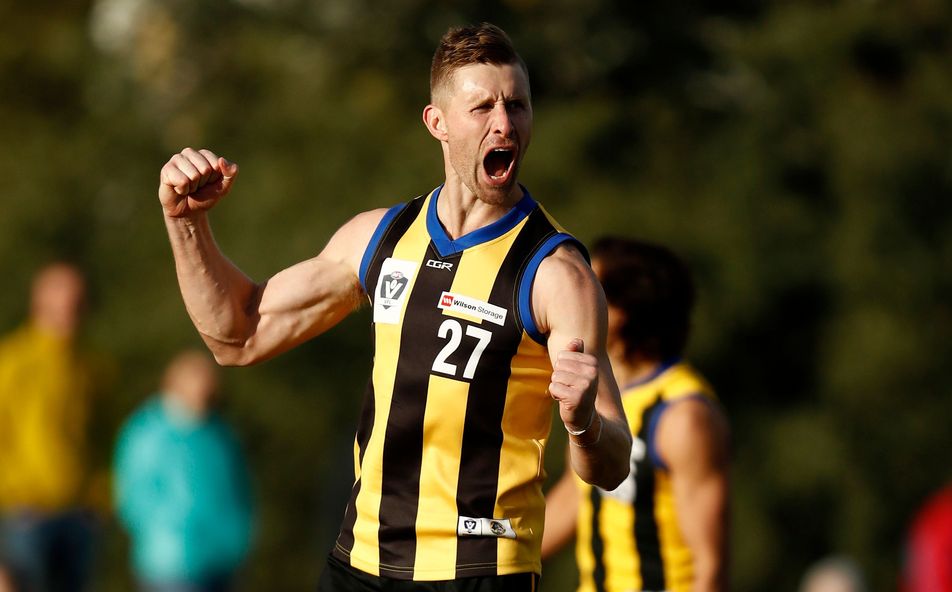 WITH no SANFL or WAFL action over the weekend, the state league action was slightly quieter over the weekend. However, there was no shortage of entertainment as plenty of sides went head-to-head in thrilling contests.

The VFL kicked off on Thursday night, with the Lions travelling to Metricon Stadium to deliver a 10-goal belting to the Gold Coast Suns. The Lions kicked 11 goals in the second half in a dominant display in the first Q-Clash to take place in Victoria. Big-bodied midfielder Cam Ellis-Yolman was outstanding in his first VFL game for the year, competing hard through the midfield to finish the match with 39 disposals, seven marks and seven tackles as he pushes for an AFL recall for the Lions. Teammate Will Tasker booted five goals from 21 disposals in a fantastic outing to continue his strong form. For the Suns, Brayden Fiorini continues to adjust to his new role off half-back, ending the contest with a team-high 32 disposals, eight marks and a goal, while Will Brodie had 27 touches through the midfield.

The closest match of the round was played out on Saturday afternoon, as the Casey Demons escaped with a one-point win over the Geelong Cats at Casey Fields. The Demons’ inaccuracy nearly cost them, finishing the game with 22 scoring shots to Geelong’s 16, but the footy gods rewarded those who wait, as they regained the lead 13 minutes into the final term and were able to hold on to remain undefeated. Demon Mitch Brown kicked four snags from seven scoring shots in an important performance which would likely impress the AFL selection panel, while Tom Sparrow continues to find the ball, ending the game with 32 touches and six tackles. Cat Charlie Constable was outstanding through the middle, finding the ball 32 times and booting a goal, while Josh Jenkins followed up his seven goals last round with a three-goal haul on Saturday.

Richmond put on a clinical performance on Saturday afternoon, as they dominated GWS by a whopping 97 points at Swinburne Centre. The Giants were held scoreless in the first term, and the Tigers continued to put them to the sword for the remaining three quarters. Richmond big man Callum Coleman-Jones stuffed the stat sheet with 19 disposals, seven marks, 17 hitouts and five goals in a powerful performance. Teammates Josh Caddy (32 disposals, eight tackles and two goals) and Will Martyn (32 disposals, seven tackles and seven marks) were strong through the midfield. Nick Shipley was the standout for the Giants, finishing with 28 touches in a day where the Giants struggled to get their hands on the footy.

Moving up to the SCG, the Swans defended their home deck to take down the Pies by 33 points on Saturday afternoon. The Swans struggled to capitalise on the scoreboard in the first quarter as they dominated play but booted only 1.5 in the first term. This would improve as the game went on as they would run out winners with a four goal to none final quarter. Swan Ryan Clarke delivered one of the best individual performances of the round, ending the contest with 41 disposals, 11 marks and three goals to be the clear best on ground. He was well assisted by teammate Dylan Stephens, who had 37 touches of his own. For the Pies, Finlay Macrae was promising through the midfield with 25 touches and five tackles.

Hawthorn were able to run rampant as they belted North Melbourne by 108 points at Box Hill City Oval on Sunday afternoon. The game was one-sided for all four quarters, but the second half was where the Hawks really got on a roll. Booting 16 goals in the final two quarters, the floodgates opened as North Melbourne were helpless as the Hawks constantly pumped the ball forward, and Kangaroos players simply waited for the final siren. Hawk Josh Morris booted five goals in a performance that would excite Hawthorn fans, while Daniel Howe responded to his AFL omission with 37 disposals, nine tackles and two goals from the midfield. The Kangaroos did have a positive in the form of Bailey Scott, who contributed 28 disposals in a promising outing.

There were plenty of big scores in round seven of the QAFL, starting at Subaru Oval, where Broadbeach hammered Mt Gravatt to the tune of 85 points on Saturday afternoon. It was a four-quarter performance from the home side, who were simply too strong for their opponents, and deserved the monstrous win. Broadbeach key forward Jordan Moncrieff somehow bested his Round 6 bag of nine goals by kicking a bag of 10 against Mt Gravatt. In a remarkable display, he booted five goals in a row in the final quarter alone, when the game was busted wide open. Seemingly a master of his craft, he will prove difficult to contain in upcoming weeks. For Mt Gravatt, wingman Daine Macdonald competed all day in trying circumstances.

A strong second half from Morningside denied Noosa a chance at their first win as they eventually fell by 28 points at Rococo Oval on Saturday afternoon. Noosa remained competitive for the first quarter and a half, before a purple patch for Morningside gave them a comfortable lead that was never surrendered. For the second week in a row, Noosa showed promising signs but could not string together four quarters, but their first victory does not seem too far away. For the victors, ruckman Bradley Hodge was fantastic, giving his midfielders first use, and even floating forward to boot two goals of his own. For Noosa, centre half-forward Sebastian Rogers competed well to boot two goals and challenge in the air.

Labrador stamped their premiership credentials for the 2021 season with a 70-point triumph over Palm Beach Currumbin at Salk Oval on Saturday afternoon. Despite trailing at quarter time, Labrador dominated for the next three quarters as they gain some serious momentum heading into the next round. Labrador forward Bryce Retzlaff was the star, kicking seven goals in a monstrous performance that he had threatening to deliver in the previous weeks. For Palm Beach Currumbin, ruckman Jonathan Croad put in a valiant performance despite the loss.

The TSL had some big scores throughout their seventh round of action, kicking off with North Launceston’s 85-point demolition of Glenorchy at KGV on Saturday afternoon. The win sees North Launceston continue their outstanding form, and if cross-town rivals Launceston lose a game, they will be eager to try and grab top spot on the ladder. North Launceston ruckman Alexander Lee was voted the strongest performer of the day as he consistently gave his midfielders first use. Glenorchy half-back Daniel Joseph fought all day despite being under constant duress.

Blundstone Arena nearly saw the upset of the round with North Hobart falling just one point short of Clarence in Saturday afternoon. North Hobart are sitting in last place with just the one win, while Clarence are notoriously strong on their home deck at Blundstone, so a boilover here would have sent shockwaves throughout the league. For Clarence, Tyler Penwright impressed across half-forward in the win, while North Hobart’s Jack Mcculloch was strong in the ruck throughout the day.

Launceston survived their biggest scare, but displayed their class on their way to a 48-point triumph over a brave Lauderdale side at Windsor Park on Saturday afternoon. Lauderdale faced the toughest task in the league, and performed admirably against the reigning premiers, but Launceston are simply on a roll, and its hard to see anyone putting a stop to this anytime soon. Launceston superstar Jake Hinds continued his exceptional season, claiming best afield honours once again to maintain his strong reputation. For Lauderdale, backman Tom Ratcliffe was a clear standout with his defensive work.