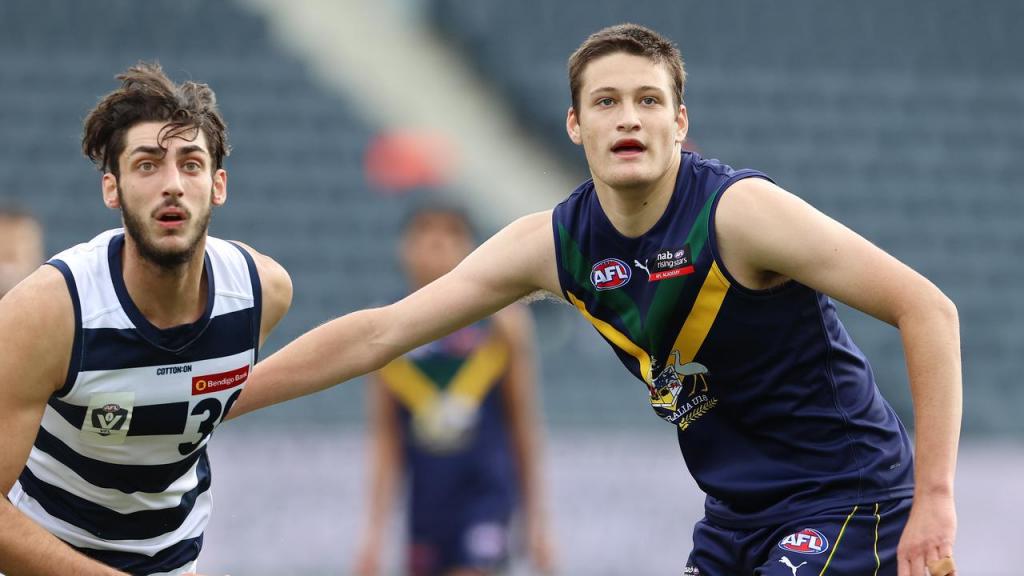 MID-SEASON draft fancy Ned Moyle has taken to senior football with aplomb in 2021, rising steeply to become one of the premium rucks available. The 19-year-old ruck is now three games deep into his Victorian Football League (VFL) career with Collingwood, having managed the same amount of NAB League outings with Oakleigh Chargers. He also turned out for the AFL Academy last month as an additional squad member, making him one of just two 2002-born prospects to earn those representative honours this year.

With the mid-season intake approaching, Moyle has already gotten a taste of what the top level may be like having competed against a bunch of AFL-listed rucks – with no less than three in his latest outing against Sydney. His 205cm frame, work rate and developing craft are traits which stand out, as many top flight clubs scramble to top up on viable rucks for the future. Moyle is the prospect under our VFL Player Focus microscope this week; we run you through his game quarter-by-quarter, and bring you the key stats out of his Round 5 showing.

As Collingwood’s primary ruck for the evening, Moyle might have been pinching himself as he stared down senior-listed bigman Callum Sinclair at the opening centre bounce. But the youngster started as he sought to go on, not afraid of the physicality such experienced players bring and willing to jump through each ruck contest. While he looks a lumbering type at times, Moyle reacted well to when the ball moved either way by fulfilling his duties on the spread and ensuring the Sydney rucks would not be able to sneak forward or drop back to mark easily.

He showed he was keen to compete, but that nervous energy was perhaps misplaced in some of the early ruck duels as Sinclair was able to use Moyle’s momentum against him and gain a better read of the ball in flight as they wrestled for position. Still, Moyle showcased some of his reliable ground level work by mopping up when called upon. He was clean by hand and played the percentages, putting his big frame over the ball before keeping it simple to dish out of congestion to his midfielders and essentially bring them into the play.

Around the ground, Moyle’s work rate held up to AFL standards as he got to each contest without fuss, while also doing the one-percenters like competing on the goalline when Sydney was about to have a long-range set shot. He could be caught out in transition with quicker ball movement as speed is not a strong suit, but against similarly athletic talls he is able to keep up and ensure they don’t become easy options. At the contest, he was outdone for upper body strength and that developing mobility meant he looked a touch more comfortable when operating in straight lines, or under the high ball – where his reach could be used to advantage.

Starting in the ruck once again, Moyle’s next challenge would be against the athletic Joel Amartey, another AFL-listed tall. He made a good decision early to spread hard as Collingwood won a free kick at the centre bounce, becoming an option in the corridor and being duly rewarded. From the uncontested mark, he again took the team option to hand off to a runner as the Magpies continued their forward break.

He also became an option for long kicks down the line, positioning between the arcs with the ball coming away from either arc and doing his best to compete aerially. Speaking of, the highlight of Moyle’s game was a nice clunk inside forward 50 as he sat under a high ball and rose to take the mark under oncoming heat. While the 35-metre set shot from just about directly in front drifted off to the left, Moyle’s previous act showed a nice area of development in his game.

The Oakleigh Chargers product continued to show no issue in his desire to compete despite the stiff opposition, splitting a bunch of ruck duels and even laying an aggressive lock-up tackle on the wing. Though his more experienced adversaries began to get on top with class, Moyle showed good appetite towards the hard task of taking on (essentially) the sole ruck duties, with Mason Cox giving him a chop-out. The half time break proved a well earned one, with the second term arguably Moyle’s best for the evening.

The fatigue of playing a lone hand against stronger and more mature talls perhaps began to set in after the main break, as Moyle’s ability to leap through or into his opponents at the centre bounces became less of a factor. He still managed to notch a few nice taps to advantage, competing well in wrestles to protect the drop zone and hit to viable options at the stoppage.

With the game played at a relatively high intensity and bringing forward a lot of end-to-end action, Moyle really had his work cut out for him in terms of ground coverage. He got a sizeable rotation in after about 13 minutes and came back on with just over five left to continue his work in at least halving a good amount of ruck battles. His confidence showed as he won his lone disposal for the quarter by grabbing from the ruck duel and dishing off by hand – albeit to a teammate under pressure.

Moyle did his best to run out the game strongly, continuing to try some new things in the ruck and essentially refusing to be soundly beaten. His bodywork was solid and allowed him to win taps on the right side of the stoppage, though he found himself out-jumped by Sam Naismith at a few centre bounces – lacking the same kind of spring after three hard quarters.

His two disposals for the quarter came by foot. The first was via a free kick for holding inside defensive 50, which he used to bomb long to a contest on the wing. Some nice work to nudge Sinclair under the ball and prize a snap away on goal was the second kick, and also resulted in Moyle’s second behind for the game. Overall, he rose to the occasion of competing against solid AFL rucks and while they outclassed him at times, his competitive spirit kept him in the contest.

With many AFL clubs in need of rucks who can provide decent foil for primary options, Moyle has put his hand up through some solid VFL form. Though his numbers are not always high, he competes well both in the ruck duels and at ground level to impact at that sense at the least, and his 205cm frame is continually building to be able to keep up with the rigours of senior football. Mobility, explosiveness, and building the strength to mark around the ground are all areas of growth, which can be worked on with a few more preseasons. The 19-year-old has shown good development already, so will rightly get attention in June’s mid-season draft.