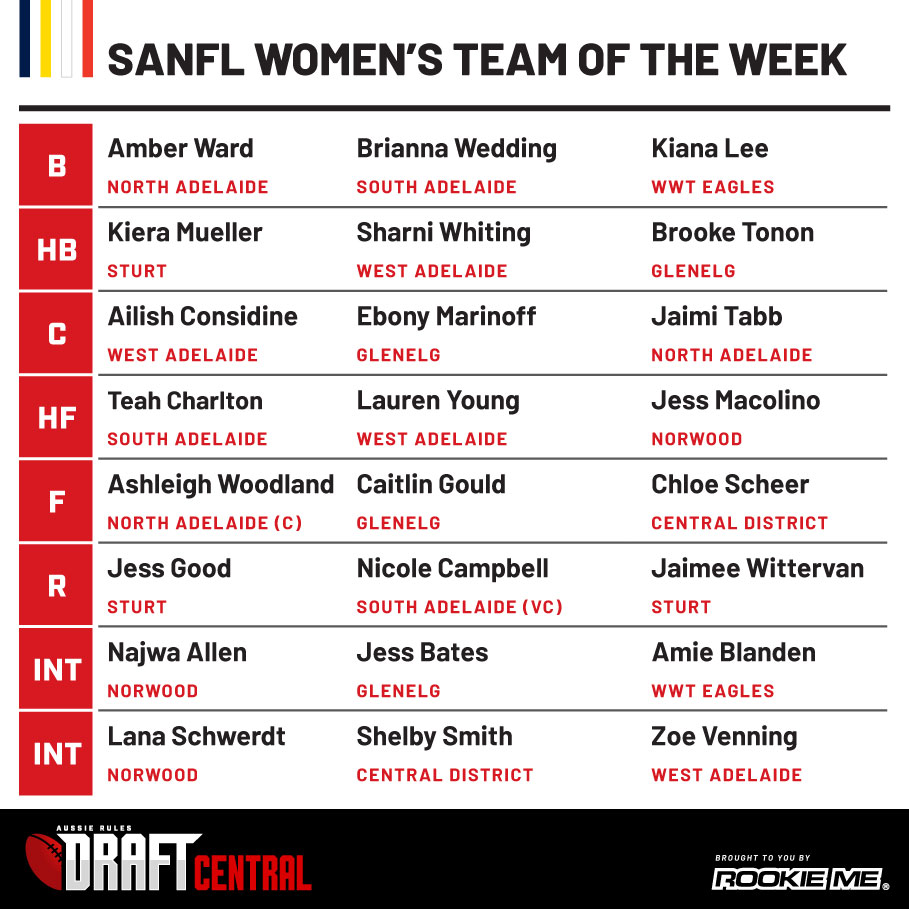 IN the final week of the season, the competition for spots in the Draft Central South Australian National Football League (SANFL) Women’s Team of the Week is as high as it has ever been. A shortlist of more than 30 players had to be whittled down to 24, as West Adelaide and Glenelg both finished with a round-high four players each. Fellow winners, Norwood and North Adelaide had three players each, as did losers South Adelaide and Sturt, whilst Central District and Woodville-West Torrens ended up with two representatives apiece.

Securing a finals spot with the one-point win over South Adelaide, West Adelaide had plenty of contributors with experienced duo Sharni Whiting and Ailish Considine, and State Academy members Lauren Young and Zoe Venning making the Team of the Week yet again. Their opponents South had the three players themselves, with Brianna Wedding being the other key position lock, alongside Teah Charlton and Team of the Week vice-captain, Nicole Campbell.

Glenelg also managed the four players, with last week’s captain Ebony Marinoff unsurprisingly back again. She is in the side with Caitlin Gould, Jess Bates and State Academy Brooke Tonon, all into the 24-player squad. The Bays defeated Central District who had the two players in the side, with Chloe Scheer and Shelby Smith back again in the team.

Norwood finished on top of the SANFL Women’s table and their final round win netted them three representatives in this week’s team, with Jess Macolino, Najwa Allen and Lana Schwerdt all into the side in what was an even team contribution. They defeated Woodville-West Torrens who had the two players in the squad, with Kiana Lee in defence, and Amie Blanden on the interchange.

The final match saw North Adelaide get the job done against Sturt, led by Ashleigh Woodland who slotted six goals to earn the captaincy of the team this week. Along with Woodland, defender Amber Ward and midfielder Jaimi Tabb also made the side. The Double Blues had a standout in Kiera Mueller off half-back, ruck Jess Good and midfielder Jaimee Wittervan all in the starting side.

In terms of emergencies, South Adelaide’s Montana McKinnon, Norwood’s Sophie Armitstead and Woodville-West Torrens’ Marlie Fiegert were chosen, whilst Sturt’s Isobel Kuiper and Zoe Prowse, North Adelaide’s Brianna Arthur and West Adelaide’s Abbie Ballard were also amongst those on the extended list for this week’s Team of the Week.

DRAFT CENTRAL SANFL WOMEN’S TEAM OF THE WEEK: ROUND 11