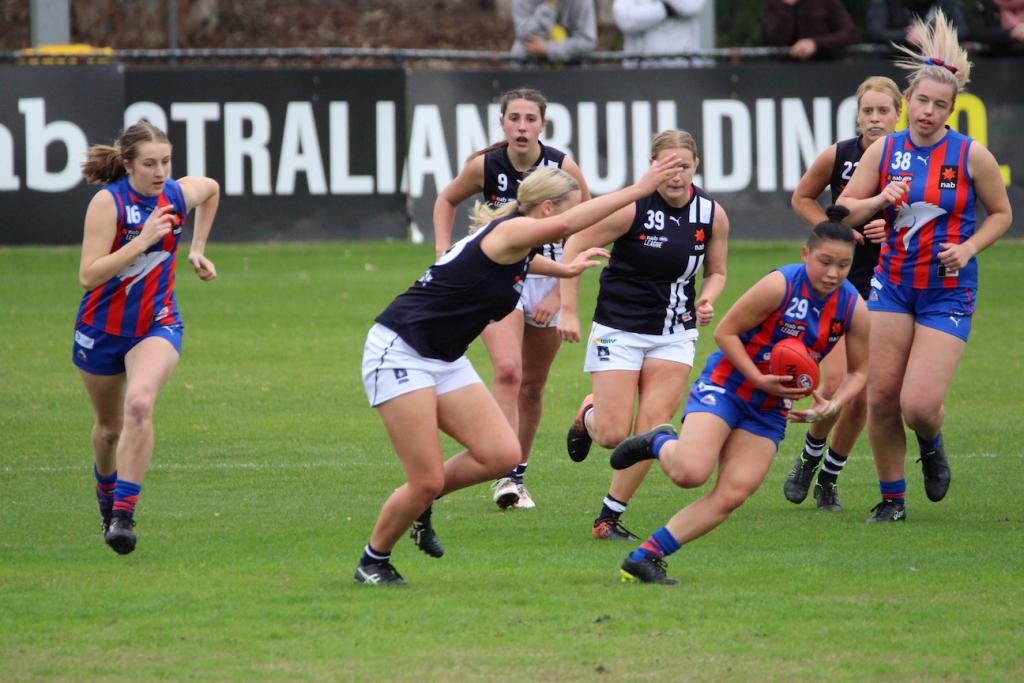 BEST on Ground Medallist in the NAB League Girls Grand Final, Oakleigh Chargers’ Amanda Ling has praised her teammates for enabling her to perform the way she did in the Chargers’ 2021 premiership victory over Geelong Falcons. The Chargers booted seven goals to two in the first half as the midfield took control and then the side steadied to win 11.5 (71) to 5.4 (34) at Avalon Airport Oval yesterday afternoon.

Whilst there were plenty of impressive performers such as Jasmine Fleming (17 disposals, seven clearances, five inside 50s, three tackles and a goal) and Stella Reid (10 disposals, three marks and three goals), it was the four quarter effort and influence of Ling through the middle who stood tall. The hard-working midfielder picked up 21 disposals, two marks, 10 tackles, four clearances and three inside 50s, leading the game for both disposals and tackles. When asked how she was feeling post-game, Ling was still in a state of euphoria.

“Really overwhelmed right now,” Ling said. “Just it’s unbelievable. “Like the group of girls that we’ve got and the connections that we’ve made. “Like Stella (Reid) said in another interview, it’s unbelievable and it’s going to take a while to soak in. “But yeah it’s amazing, it’s an amazing feeling.”

Ling said the playing group tried to keep the build-up to the decider like any other week, but knew that the stakes were higher and the nerves were certainly there.

“The week, it was nerve-wracking, definitely,” Ling said. “Knowing that we’d come so far and we just wanted to give it all that we can out on the day, and the girls stayed really positive during trainings and stuff like that, and we all just kept it like any other week, just like any other game and just did what we did and it turned out amazing. “It worked well for us.”

Oakleigh Chargers region talent operations lead Jy Bond said Ling was incredibly deserving of the honour, and he was not the least bit surprised she stepped up on the big stage.

“She’s fantastic, she’s a ripper,” Bond said. “We had a conversation with her during the week just about what sort of impact she could have on the grand final, on the big stage. “We said ‘you’re the type of player who could potentially get best on ground’ she impacts around the contest, she just accumulates the possessions, she tackles, she chases, she brings other players into the game. “I think she’s got a future in AFLW and it would be such a fantastic story, she’s a wonderful character and I couldn’t be happier for her to be best on ground in a grand final team.”

Despite the pep talk from the Chargers’ staff, Ling said she just tried to play her role, and the accolade was unexpected and humbling, praising her teammates for their roles in assisting with her best on ground performance.

“It’s really unexpected,” she said. “I was not expecting it at all, I was really honoured, really humbled to have this award, it’s credit to the girls though, they played a massive role in it. “Footy’s a team game, and I couldn’t have done it without them.”

A draft-eligible player hoping to step up to the next level if chosen in the AFL Women’s Draft later in the year, Ling said she would aim to get a taste of VFL Women’s action with Port Melbourne as the state league competition plays out the last few rounds. One thing is for sure though, her grand final performance is unlikely to be forgotten anytime soon.