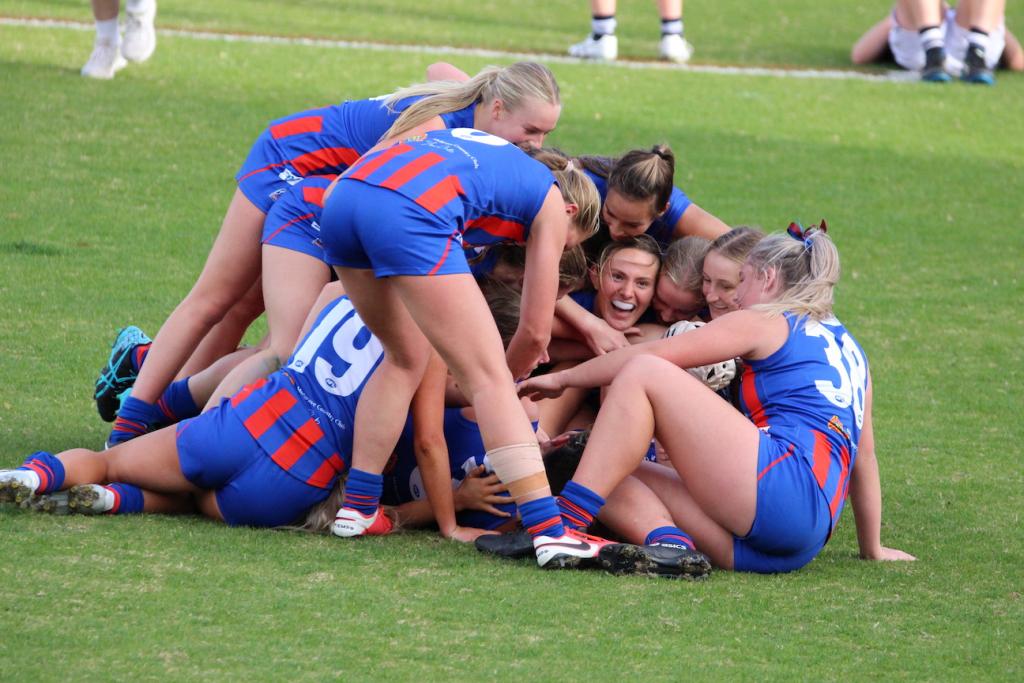 OAKLEIGH Chargers region talent operations lead Jy Bond has praised his team for its focused and measured approach in the lead-up to, and during the 2021 NAB League Girls Grand Final. The Chargers toppled the Geelong Falcons 11.5 (71) to 5.4 (34) at Avalon Airport Oval yesterday afternoon, booting seven goals to two in the first half, then withstanding a mini surge either side of half-time to hold out and win the girls’ program’s maiden flag.

Bond said he was “feeling pretty good” after his team came through with the win, though admitted given his relationship with the other talent regions including the Geelong Falcons, it was always going to be a “bittersweet” occasion.

“It’s always nice to end the season with a flag and a premiership cup,” he said. “It’s just a great result for all the hard work that the girls have put in the last few months and the staff and it’s always bittersweet because you have good relationship with the majority of the other NAB League teams, ‘Cora’ (Paul Corrigan, Falcons head coach) and ‘Domsy’ (Tom Lonergan, Falcons region talent operations lead).

“It’s always hard because you always wish their girls win it as well. “It’s one of those scenarios where it’s bittersweet, you’ve obviously pumped for our girls but it’s always disappointing because they’ve done all the same job as we have, they’ve done all the hours we have. “Their playing group is probably just the same as our girls, but we’re fortunate enough to be the ones holding the cup up which is obviously pretty fantastic.”

The Oakleigh Chargers went through the year with only one loss, and that defeat came at the hands at the Falcons down at Deakin University. Bond said the result added some extra incentive to the playing group ahead of the grand final where he declared his side the “underdogs”.

“Yeah it (today’s performance) was a good one, we were the underdogs today,” Bond said. “They did give us a bit of a touch up in Geelong which was good for our girls to probably come in today with a bit more focus. “Having a bit more determination to win today. “I felt like they … took a lot of contested marks down in Geelong and really broke us down that way. “I think today we really put a stop to that, and we obviously won the ball out of the middle fairly well and just hit the scoreboard so not much to it, we just kicked more goals.”

Holding a five-goal lead at half-time, the Chargers squad came out determined not to drop the intensity, with Bond making sure everyone was aware the Falcons side was more than capable of stringing multiple goals together, particularly in the windy conditions.

“Geelong proved that they could turn the game pretty easily,” Bond said. “They are a top team that could kick five or six goals in a quarter like we did and we were under no illusions that could possibly happen. “Especially with the wind. “Lucky our girls came out and stayed focused and ensure that they did keep the scoreboard pressure on, but it could have turned pretty easily. “We were able to do it, Geelong could have done it, but in the end we applied more pressure throughout the game.”

Amanda Ling won best on ground in the premiership victory, collecting match-highs in disposals (21) and tackles (10), but it was her combination of defensive pressure and ability to get to the right spots that earned her the medal.

“She’s fantastic, she’s a ripper,” Bond said. “We had a conversation with her during the week just about what sort of impact she could have on the grand final, on the big stage. “We said ‘you’re the type of player who could potentially get best on ground’, she impacts around the contest, she just accumulates the possessions, she tackles, she chases, she brings other players into the game. “I think she’s got a future in AFLW and it would be such a fantastic story, she’s a wonderful character and I couldn’t be happier for her to be best on ground in a grand final team.”

As for some other players who caught Bond’s eye, he was just impressed with the overall team performance, though said some prime movers had serious impact to get the momentum in the Chargers’ favour.

“Stella Reid, Sarah Morley kicked three goals, it was a really good team effort,” Bond said. I know it’s a bit of cliche but it was. “Jasmine Fleming has been fantastic to release ‘Rowy’ (Charlie Rowbottom) down forward. “We’ve just got a lot of ball-winners and ball users throughout the team we can put in dangerous positions.

The team and club will no doubt enjoy the victory for some time, but for Bond, there was not much turnaround before re-shifting his focus to the next competition, the NAB League Boys.

“Here we just reset and we look towards next year and we obviously move onto the boys program, but I just couldn’t be more happy for the girls, it’s a great, great result,” Bond said. said.