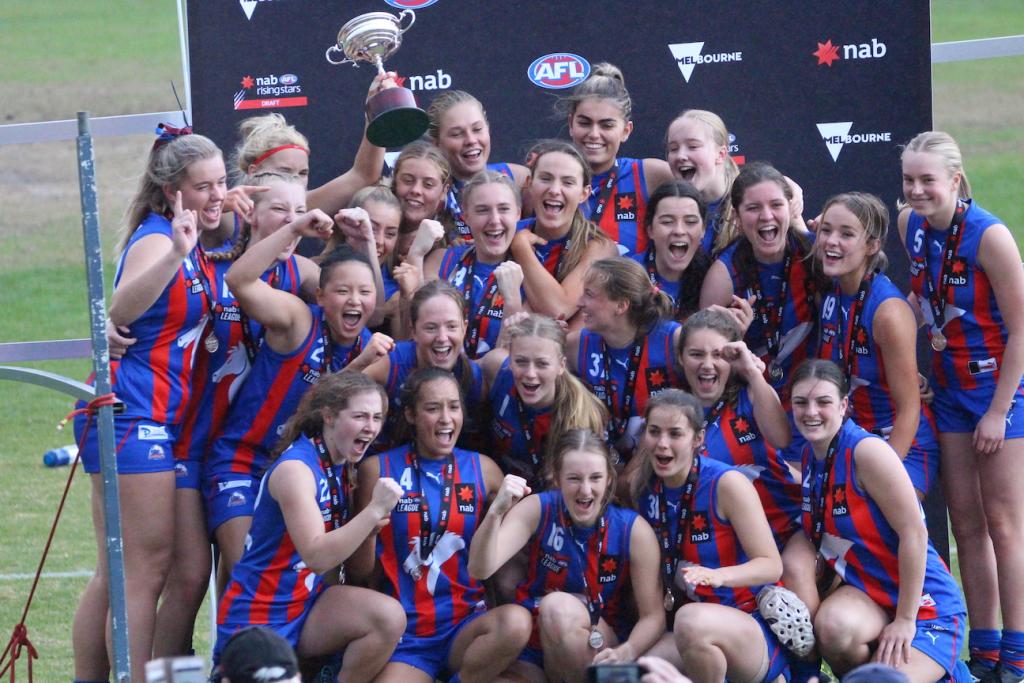 A SEVEN goals to two first half set up a memorable premiership victory for the Oakleigh Chargers, as the NAB League Girls top side proved too good on the day for Geelong Falcons. The Chargers had only dropped one game during the season – to the Falcons – but they made sure that lightning did not strike twice, defeating the country side 11.5 (71) to 5.4 (34). Dominant clearance winner and ball magnet Amanda Ling deservedly won Best on Ground in the Chargers’ victory.

It was a hot opening start between the arcs as Ling had the first set shot but fell short, not long after though Stella Reid scored something out of nothing with a dribbling goal to open the proceedings. An immediate answer came via Poppy Schaap with a clever snap herself to level the scores at six-minute mark. Moments later great defensive pressure from the talented small with a tackle on Alexandra McCulloch earned her a free kick from 35m out missed to the right.

Tess Craven had a snap outside of the boot 10 and a half minutes but missed, then an end-to-end play starting with a strong grab at half-back from Charlie Rowbottom kept getting it forward for Reid to run onto her second goal. Reid then almost had a third bouncing towards open goal square with only Eliza James but bounced past her and hit the post. Then the overwhelming forward pressure saw Abby Russell final kick one through with a repeat entry, nice sidestep and goal from 15m out. The next centre clearance the ball thumped inside 50 and Oakleigh booted their third in as many minutes with Sarah Morley running onto the ball and kicking truly.

In the blink of an eye the lead was out to 17 points and straight away Ling powered from the clearance to put it lace out to Rowbottom. She opted to pass the ball off instead and the Falcons’ defence was up to the task.

Reid’s strong start continued in the second with a great kick to Morley on a tight angle and goaled for a fourth straight goal. The Chargers kept the foot on the pedal as once again Morley piled on the pain with a running goal in the goal square and the lead was out to 29 points. Yet another chance to Oakleigh just missed with a run-down forcing a rushed kick and behind.

Geelong’s first meaningful chance came from Craven who just put a high up and under inside 50, and the Chargers’ defence was able to clear it again. Then, after a couple of almost-chances, Jade McCormack joined the party with a massive seventh team goal to race out to a 36-point lead with just five minutes left in the half.

Lee was trying hard in defence, but the Oakleigh dominance with the ball was enormous, with more than double the inside 50s in the first half (15-8). A late major to Tamika Lewis gave the Falcons a sniff after six consecutive Oakleigh goals and cut the half-time margin back to 30 points.

Needing an early response, the Geelong Falcons got it through Lewis who kicked on in the first couple of minutes to cut the deficit to 23 points after behind moments prior. Just as Geelong seemed to have he momentum, Chargers answered through Reid’s third goal after a strong mark to bring up the half century for her side.

Geelong maintained a relentless pressure with the Falcons getting it forward and great teamwork by hands finishing with Schaap who snapped truly well. Up the other end Ling had a set shot but missed to the right. It was not long until the Chargers responded through Taylah Morton with a scrambling goal in the square.

A strong mark by Mia Van Dyke in the deep pocket then weighted the set shot perfectly to keep her side within tough at 24 points as the final 90 seconds ticked down. That ended the game with a 24-point difference between the sides and the Chargers answering each challenge but the Falcons not going away.

The final nail in the coffin for the Chargers came 80 seconds into the contest with Ameille Smith running onto the ball and kicked the goal perfectly. From there, the Falcons tried all they could to run the gauntlet, but the Chargers held up really strong, and even posted the last goal of the match to Jasmine Fleming to post a memorable victory. Charlotte Simpson had a shot on goal but drifted to the right and missed.