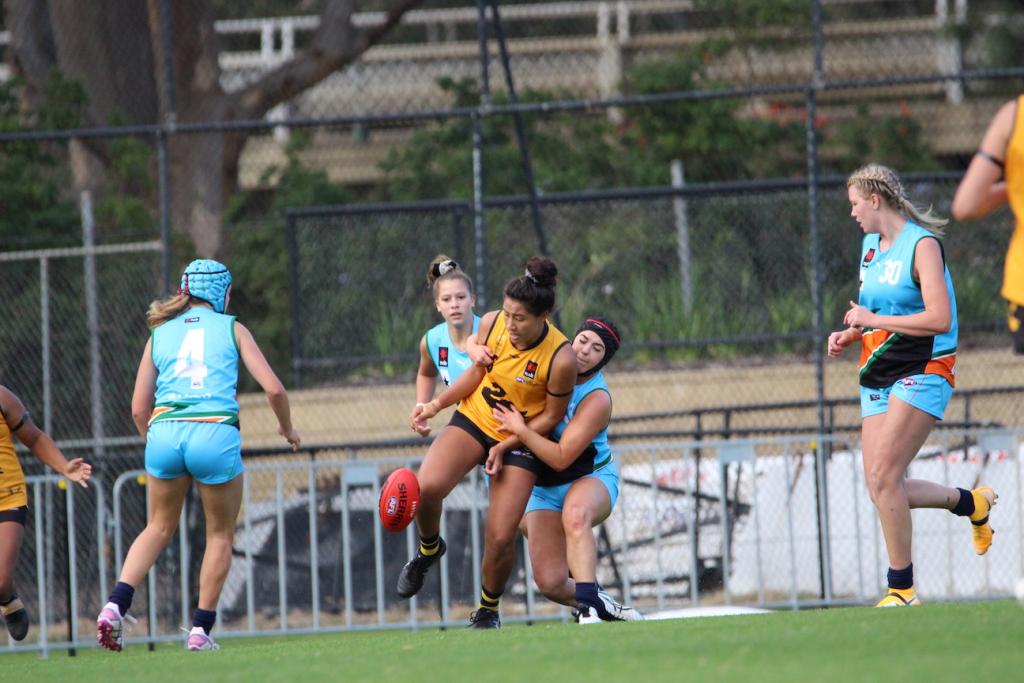 PEEL Thunder’s Beth Schilling is naturally an eye-catching player with her athleticism and overhead marking ability among a number of strings she has in her bow. The talented tall has been a key member of Peel Thunder’s side this year, and showed during the AFL Women’s Under 19s National Championships that she can match it with the best in the country. Often utilised in defence, but could play forward, or even pinch hit in the ruck due to her vertical leap, Schilling is the ultimate utility,.

“I’d say my overhead mark is definitely one of my greatest strengths,” Schilling said. “As well as my overall physical capability which is really good, and another thing that I think is one of my strengths is the reading of the play. “I can tell what’s going to happen when the ball is coming down.”

While the Peel Thunder tall admittedly said she struggled with her fitness and wanted to build her endurance further, she was thankful for all teh support around her, particularly from her local club. When asked who had had the greatest impact on her career to-date and was an inspiration to her, she was thankful for Carey Park Panther’s women’s coach Geoff Nischke‘s ongoing support.

“I would have to say probably my local club, my coach Geoff Nischke,” Schilling said. “He’s still such a great inspiration to me because he has been so supportive and he’s told me and really let me know that I can progress as far as I want to go. “Even now he calls up once in a while and asks how I’m going and watches my games. “I guess that support’s been really inspirational to me as a player.”

Despite having made her way through the pathways, Schilling was not always a footballer, having originally started with the round ball. Once her brothers decided to change into Australian rules football, Schilling followed suit, and has never looked back over the past seven years.

“I pretty much started playing when I was about 11-years-old and I started playing because of my two brothers, one older, one younger,” Schilling said. “They were playing soccer previously the same as me, and so they changed and they convinced me to switch from soccer to footy and I just enjoyed it so much, I continued it until today.

“From there I went to play first my local junior team and then I transitioned into the women’s league, and from there I was asked to play for the WAFL and Peel Thunder and also at the same time as playing WAFL I was doing things with State as well and the development academy.”

Schilling immediately noticed the difference in quality once she stepped up to the West Australian Football League (WAFL) Women’s competition, and while 2020 was a disrupted year due to the COVID-19 pandemic, Schilling is pleased to be running around for the Thunder in 2021.

“It’s been really good (playing for Peel),” she said. “This year’s been my first proper season with them. “I played a few games with them last year, but because of COVID we couldn’t play as many. “But it’s been a big transition from local footy and the standard that they expect. “The speed’s a lot faster and the skills are a lot better, so I guess it’s been good for me and my development as a player.”

Now in her draft-eligible year, Schilling is eyeing off going one step better and reaching the elite level of the AFL Women’s competition. While she understands it is tough to gain and maintain a spot in the league, her main goal is to continue her rate of development in order to become the best possible player she can be.

“Obviously to be drafted would be amazing but I guess even if I don’t get drafted into the AFL, I would be happy if I can play the best footy I can achieve as a player and I’d be satisfied with that,” she said.