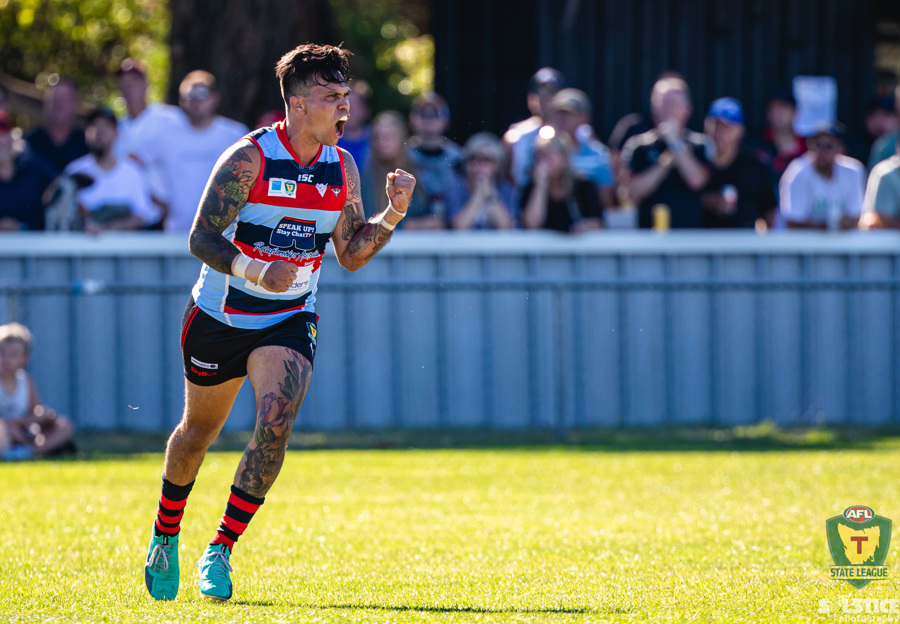 With the weekend just around the corner, teams will begin their final preparation for a round of hard-fought football action across the states. Due to the interstate clash between South Australia and Western Australia on Saturday, the SANFL and WAFL will not hold any matches this weekend in their senior men’s division.

The VFL has plenty of enticing clashes to go ahead this weekend, starting with the Casey Demons hosting Geelong at Casey Fields on Saturday afternoon. Both sides sit at 3-0 on the ladder to start the season and the winner of this match would place themselves right up there as a contender of the competition. Geelong will be riding the high from Round 4’s 45-point triumph over the Northern Bullants, where forward Josh Jenkins booted 7.5 from 23 disposals in an incredible performance. The Demons will be eager to lock him down and nullify the scoring of the Cats, which can be tricky to stop at times. The Demons will be refreshed after last week’s bye, and the fresh legs could prove the difference in this clash. Sam Weideman has been picked up for an AFL recall, having kicked four snags in his last outing, while Majak Daw will notch his 100th VFL match.

Richmond’s VFL side will host GWS at Swinburne Centre on Saturday afternoon, as both teams look to get their seasons back on track after a 1-2 start to the year. Both sides had the bye last week, with plenty to ponder after a poor start. The Tigers’ only win came in Round 1 over a struggling Sandringham side, and their two losses to follow have come by over 55 points. With plenty of injuries to Richmond’s AFL side, there is as much opportunity as ever for players in this team to earn a recall, and with Sydney Stack and Thomson Dow working their way into match fitness over recent weeks, expect a fair crack from both. GWS finally found their mojo and grabbed their first win in Round 3 as they caused an upset to hand Southport their first loss of the season, and will be looking to carry this momentum forward despite the week off. Jake Ricardi had an exceptional performance in that match with 41 disposals and 19 marks and will be one for opposition coaches to keep an eye on.

Saturday’s final game will take place up north, as Collingwood travel to the SCG to take on Sydney in a clash that means a bit for both sides. Sydney have started the season 1-2 and another loss here will make it much trickier to make finals at the end of the season, so they will be eager to stop this from happening. Their Round 1 win over the Giants was a promising start, and their next two losses came to the tune of only 14 points and four points, so they aren’t too far off the pace. Logan McDonald had his strongest performance of the year in Round 3 and will be looking to build on this as he gains confidence on a weekly basis. Collingwood’s start has been slightly brighter with a 3-1 record after four games seeing them sit in seventh place on the ladder. All three of their wins have come by under 10 points, so they will need to be at their best if they are to grab their fourth win. Midfield bull Brayden Sier has been performing well lately and should once again prove an important factor on Saturday.

Round 7 of the QAFL kicks off with Broadbeach looking to keep their undefeated streak alive as they host Mt Gravatt at Subaru Oval on Saturday afternoon. Broadbeach easily handled Wilston Grange last week, and remain the only undefeated team after seven rounds as they look to live up to their reputation as a powerhouse of the competition. Full-forward Jordan Moncrieff booted a whopping nine goals in the win, and will likely draw the attention of the opposition defence for all four quarters. Mt Gravatt have started the year in disappointing fashion, as they currently hold a 1-3 record to find themselves sitting in eighth place. They will enter the match as underdogs, but the beauty of sport is the upset. Fullback Gavin Grose will have the tough task of manning Moncrieff, but has been his side’s best three weeks in a row, so this should provide for an exciting contest within the contest.

Noosa’s next opportunity to find their first win of the season will come in the form of this weekend’s clash with Morningside at Rococo Oval on Saturday afternoon. Noosa have struggled in their first five games of the season, and are yet to register their first victory of the year, with their most recent loss coming at the hands of Surfers Paradise by 70 points. Something will have to change if they are to sing the song after Saturday’s final siren. Despite his team’s poor form, Aaron Wilson has booted eight goals in the last three games and will be one to keep an eye on for some scoring output. Morningside escaped with their third win of the season by the narrowest of margins last week, taking down Redland-Victoria Point by just one point, but will be confident heading into this matchup. Will Pendlebury has worked his way into some form over the last two weeks and should be strong again this week.

Moving to Salk Oval, Palm Beach Currumbin will play host to Labrador on Saturday afternoon in a match that will have ramifications for both sides. Palm Beach Currumbin currently hold a 2-2 record and are yet to win two games in a row, a fact they will be looking to change this weekend with an upset over their opponents after last week’s bye. John Anthony walked away with a seven-goal haul in the side’s last match and will likely be tough to stop once again. Labrador have had a nice start to the 2021 season, losing just one of their first five games, and another win would push them right up the ladder. Charlie Lang was best afield in their last match in his strongest performance of the year, so keep an eye on how he backs this up.

Maroochydore’s chase of top spot continues this week, as they take on Redland-Victoria Point on Saturday afternoon at Totally Workwear Park. Maroochydore currently sit in second place, with just the one loss for the season, but Broadbeach’s undefeated streak keeps them at bay for now. A win here would certainly keep them in the hunt to swoop when Broadbeach drop their first match and will enter this clash as favorites. Jacob Simpson has had a blistering start to the season, and his consistency will once again likely be on display in this clash. Redland-Victoria Point will be eager to erase the memory of last round’s heartbreaking loss with a win this weekend. A 3-2 start to the year is promising, and an upset here would stamp their credentials as contenders. Harrison Kerr has kicked 10 goals in the last three goals, so it should prove interesting as to whether he can continue this form.

The final clash of the round comes in the form of Wilston Grange taking on Sherwood Districts at Hickey Park on Saturday afternoon. Both sides sit with a 1-4 record on the season and are separated by just one ladder position following disappointing losses last week. Wilston Grange were convincingly beaten by a red-hot Broadbeach side in Round 6, but face an opponent that is out of form, and could break their losing streak with a crucial win. Hugh Fidler was Wilston Grange’s best in the loss and will be eager to drag his side to their second win. Sherwood Districts will be just as keen to grab their second win of the year, after last week’s belting at the hands of Maroochydore, so the motivation will be high.

The seventh round of TSL action begins on Saturday afternoon, as North Launceston travel to KGV Oval to clash with Glenorchy in a matchup that means a lot for both teams. North Launceston have found their groove as the season has progressed, culminating in last week’s five goal win over the Tigers. It will be hard to catch ladder-leading Launceston, but a loss here would make it even harder. Last week’s inclusion of Bradley Cox-Goodyer proved remarkable as he claimed best on ground honours and should display his skillset once again. Glenorchy also walked away with a big win last week, dominating North Hobart by 77 points in a win that should kickstart some momentum for them, and a win this weekend would seriously get their season rolling. They had a plethora of goal kickers last week, and if they can produce something similar, it will go a long way to securing the win.

Blundstone Arena will once again see some potentially thrilling football action, as Clarence host North Hobart on Saturday afternoon. Clarence will enter this match heavy favourites, especially on their home deck, but are coming off a disappointing loss against Launceston by 72 points, which would have likely shaken their confidence, and if North Hobart can take advantage of this, who knows what could happen? Oliver Preshaw is an important player for Clarence and was kept uncharacteristically quiet last week, so expect a response this week.

Launceston simply look a class above this season and won’t be short of confidence heading into Saturday afternoon’s clash with Lauderdale at Windsor Park. Launceston looked to face their toughest opponent last week in Clarence, and a 70-point win pretty much told the rest of the competition ‘good luck’. They look near impossible to stop, and Lauderdale face the task of attempting this. Launceston star Jake Hinds returned from suspension to claim best on ground honours and still leads the league best and fairest leaderboard despite missing two matches, so keep an eye out for him on Saturday.