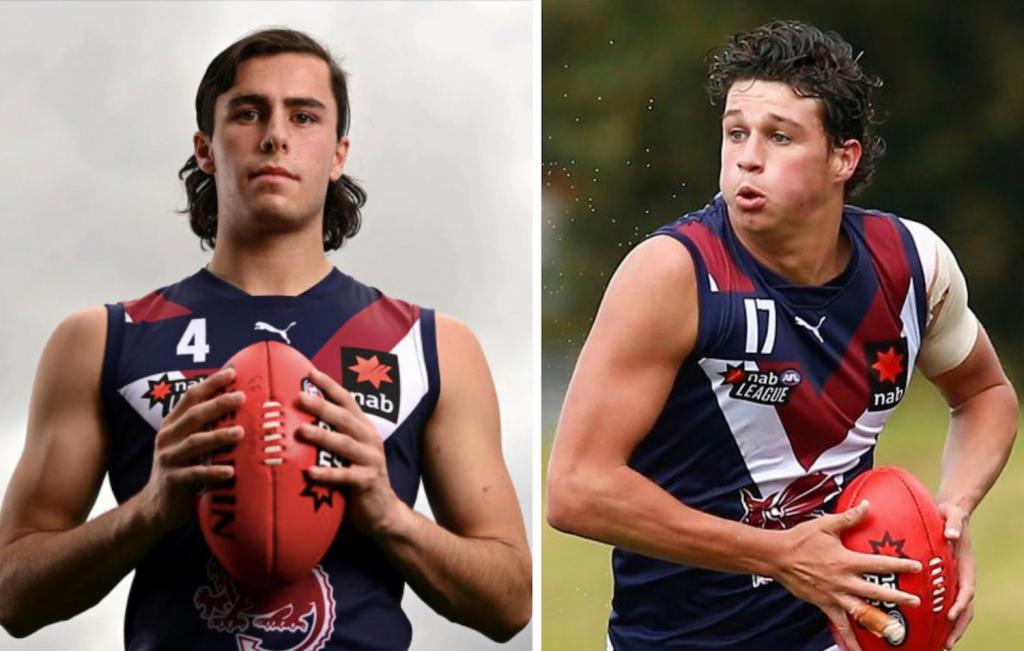 THE Sandringham Dragons have produced a great number of high-end prospects over the years, whether it be those who are touted from a long way out, or players who bolt into contention with undeniable form in their draft seasons. 2021 is no different, with line-breaking movers Josh Sinn and Finn Callaghan fitting perfectly into said categories. The pair showed high-level ability across the first three NAB League rounds, and share plenty of similar traits which have put them in good stead to this point.

Sinn is a co-captain of the Dragons side and has been pegged as a top five draft candidate since captaining Vic Metro’s title-winning Under 16 side in 2019. His speed off half-back and the wing is undeniable, often complemented by penetrative kicks which send his side forward in quick time. The 18-year-old graduated from Xavier College last year and was expected to turn out for Sandringham Zebras in the VFL over the current break, but is recovering from a hamstring strain sustained while training with the AFL Academy. He will be available for Sandringham Dragons once the NAB League resumes.

Callaghan is a prospect who has risen steeply in 2021, catching the eye during preseason and building nicely into his NAB League campaign. He is another line-breaker with good size who shows a tricky turn of speed with ball-in-hand, making him a difficult player to stop at full flight. He is currently completing his studies at St Bede’s College, but will also be available essentially full-time for the Dragons. As a late call up for the AFL Academy, he fittingly proved a capable replacement for Sinn with his work on the outer.

We compare the pair by taking a look at their form to this point, physical profiles, which positions suit them best, what style of play they provide, and their potential areas of improvement.

Both players have met at a similar point in terms of form after three NAB League rounds, having come into the season with vastly different expectations. Sinn, pegged as a potential top five candidate and one of his side’s co-captains, warmed to the blockbuster Round 1 clash with Oakleigh well, becoming prominent at crucial stages to help lift his side over the line. The Dragons coaching staff pulled the trigger on his midfield move early, sending him into the guts late in that game to good effect.

Sinn carried that form into his second outing, against Northern, again rotating between the middle and half-back in soggy conditions at Preston City Oval. His game against Dandenong in Round 3 shed light on how Sinn would fare as a permanent midfielder, but his line-breaking ability again came to the fore. The 18-year-old notched his third game of 20 disposals, providing good drive and improving in his disposal as the game wore on. While his best is arguably yet to come, Sinn and Sandringham can be pleased with the form shown across the first three rounds.

Callaghan came into the 2021 season with a touch less fanfare, but had displayed plenty of promise during the Dragons’ preseason intraclub scraps. He proved that rise in attention was warranted in his Round 1 debut, showcasing good speed on the outer and his potential to generate some serious forward momentum. After a steady start in a highly pressurised contest, Callaghan was kept a little quieter amid the tough conditions in Round 2 against Northern, but put forward his best game to date in Round 3.

Stationed on his usual wing, the rising prospect was able to penetrate both arcs and looked to have gained a good deal of confidence from those first two appearances. Encouraged to be more damaging in his disposal, Callaghan was better able to match his impact with ball-in-hand to his use by foot. While his previous form and desirable athletic profile went a long way to justifying his AFL Academy selection, this game was equally important in solidifying that honour. In the Academy showcase against Geelong VFL, Callaghan warmed to the contest in time operating on the wing and then off half-back.

This exercise is clearly one more of comparing, rather than contrasting, as both players are quite similar in a range of qualities they offer. Looking at their physical make-ups, they meet similar ranges in that 185-190cm height bracket and with some good size. Callaghan’s latest listing of 82kg is indicative of his size on the eye, while it has been reported that Sinn put on 13kg over last year’s break, bringing his latest measurement up to 82kg as well.

They size-up virtually identically, and both boast the same kind of athletic superpowers. As line-breaking types, both possess electric speed but tend to use their athleticism in different ways. Sinn, who has a handy sprinting pedigree, is lightning quick in straight lines and can snatch serious meterage in a flash when released into space. With his size, Callaghan is also difficult to stop with a full head of steam and while he backs his speed to burn opponents akin to Sinn, is often seen side-stepping his way out of trouble with great agility and poise.

Both players have that explosive quality which allows for really productive outside run and eye-catching flashes of brilliance. Any passage which sees these two get ball-in-hand often results in a breach of either arc, or good territorial gain at the least. Having built their bodies since entering as tall and rangy types most suited to the outside, they both have the size now to win their own ball confidently and are able to operate on the inside as well.

At their cores, Sinn and Callaghan have both come to prominence through roles off half-back and the wing. Sinn’s starting position has often been in defence and that was the case before his midfield move this season, while Callaghan has spent most of his time on the wing for Sandringham with the potential to roll back – as he did in the AFL Academy showcase.

Sinn’s developing point of difference is his midfield craft, which has proven to already be at a decent level with good room to grow given his burst and physical make-up. He also rests forward while playing midfield and has a nice balance of inside and outside traits. Callaghan has also been exposed to midfield minutes through his time with St Bede’s College in the ACC school football competition.

Both players have also been served well defensively by the time they spend across-half back. Sinn has been shown to have his head on a swivel when setting up in the back half, showing good leadership to bark instructions to others and get touch at the stoppages. During his time on the wing, Callaghan tracks back well and is often seen mopping up in the defensive 50 arc. Both are also capable of impacting aerially, with Sinn positioning aggressively to intercept while Callaghan has the size and athleticism to compete.

In terms of their styles, they provide a bunch of the same traits; they run-and-carry with speed and can shift angles, with the ability to win their own ball, while possessing terrific left-foot kicks. The consensus is that Sinn can be more damaging with his disposal, while Callaghan is perhaps more impactful with his run. This is evident in their kick-to-handball ratios, with Sinn more willing to back his disposal by foot and take on seemingly low-percentage options which can break the play open.

While Callaghan sits at a perfect 1:1 ratio with his kicks and handballs, averaging 9.3 apiece per game, Sinn is up around 2.5 kicks to every handball per his three NAB League outings this year. Sinn’s kicking consistency has arguably been below his usually high standards in 2021, but that wavering efficiency is indicative of his license to take on riskier kicks. Callaghan is often a good decision maker by foot but bites off a touch less, while his use by hand is also quite efficient.

As mentioned above, Sinn tends to back his kicking ability and looks to further break open the play on the end of his runs, which can lead to varying efficiency at times. His Round 3 game against Dandenong serves a perfect example of this. In the first half, Sinn would stream away from congestion or be released beautifully, but lacked the finished product. Undeterred, he continued to show confidence in his ability and managed to execute some fantastic passes to his forwards. He ended with 10 inside 50s, with some of them scuppered, but others perfectly hitting targets and resulting in scoring opportunities.

He is said to be the best and most technically sound kick at Sandringham, and has watched plenty of tape on another penetrating left-footer in Hayden Young. At his best, Sinn can certainly reach those levels and his decision making is solid, but it is just a matter of levelling out his consistency. To ensure he is having the maximum effect, Sinn is being encouraged to lower his eyes a touch more when booting forward on the fly. Speaking of decision making, Sinn’s ability to time runs and make repeat efforts in that sense suits the half-back role really well, showing high-level smarts and game awareness.

Callaghan is one who also uses the ball well by foot and can gain similar penetration to Sinn, showing great improvement in that area. He is being encouraged to be a touch more damaging in this sense though, to bite off a bit more and take the risks that others might. On the flip-side, his poise in tight spots is great as he is more inclined to dish off by hand rather than bombing forward under pressure. In tight spots, he uses his turn of speed to get into space before executing a disposal. While he sometimes distributes to teammates under immediate pressure, the ability to show spacial awareness and find different avenues out of traffic are handy traits to have.