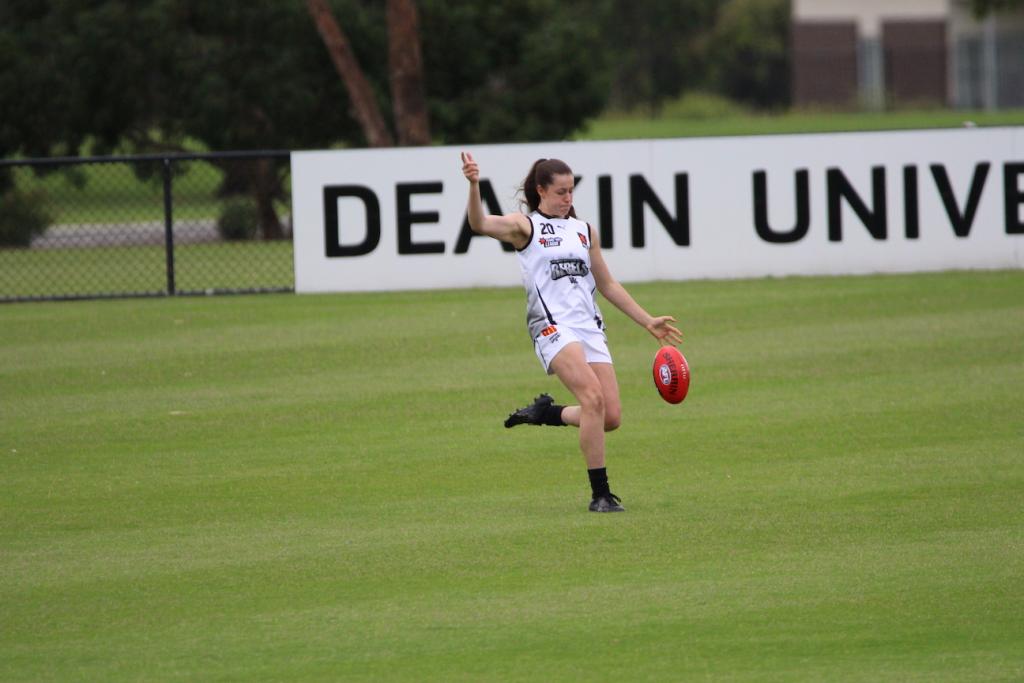 THERE are plenty of NAB League Girls debutants and AFL Women’s players who will run out for the respective teams this round of VFL Women’s (VFLW), in what could make or break some teams’ finals campaigns.

SOUTHERN SAINTS vs. GEELONG
Saturday, May 15 @ 10:00am
Trevor Barker Oval

Opening up the round is a genuine finals-defining clash in the sense that if the Southern Saints can get up at home, they should be home and hosed for the last finals spot. It will not be easy against a red-hot Geelong outfit that has loaded up on talent and looks to be the strongest lineup thus far which will be hard to beat. Focusing on youth and the return of NAB League Girls, Abbey Jordan comes in for her VFLW debut with the Saints, joining Sandringham’s Natasha Morris, whilst Tyanna Smith also makes her VFLW debut after an outstanding debut season at AFLW level. The VFLW talent at the Saints is quite strong, with Tara Bohanna and Hannah Stuart among the consistent performers this year supporting natural ball-winners Molly McDonald and Alice Burke who have shown their class above. The Cats midfield boasts Laura Gardiner, Darcy Moloney and Rebecca Webster with the possibility of Sophie Van De Heuvel rolling through and Olivia Barber rucking is the future of the AFLW side. The depth of the Cats looks to be just too strong, with Tamara Smith, Paige Sheppard and Richelle Cranston forming a dangerous half-forward line with elite level pressure. Expect the Cats to get the job done much to the relief of the chasing pack of VFLW sides just outside the finals places.

There are a couple of NAB League Girls players representing Casey Demons and Carlton in their battle at Casey Fields from 10:30am. Gippsland Power ruck Grace Matser comes back for her second game after a solid debut last weekend, whilst Northern Knights inside ball-winner Maeve Chaplin will get her first run around with the Blues. After carrying the drinks last match, Lucy McEvoy gets her chance at VFLW level, while Maddy Guerin, Natalie Plane and Charlotte Hammans will be looking to continue their great form stepping down to state league level. The Demons are just loaded across the field though, not mucking around with the likes of Eden Zanker, Casey Sherriff, Libby Birch and Jacqueline Parry in there, whilst Eliza McNamara makes her VFLW debut after a strong first season at AFLW level. The Demons have had one of the more stacked lineups the past few weeks, and with competition leading goalkicker Imogen Milford up forward, it is hard to see them not chalk up another win with the form they are in, even missing competition top ball-winner Eliza West.

PORT MELBOURNE vs. COLLINGWOOD
Saturday, May 15 @ 10:45am
ETU Stadium

Barring a collapse in the final three rounds, a win here would lock up top spot for the Magpies, coming up against a Port Melbourne side that has now dropped two of its past three games. Only Geelong could catch the Magpies in the final few weeks and even then would need the Magpies to drop all the games – or lose severe percentage – to be a chance to grab top spot. Port Melbourne is always a chance to get up though, having a couple of Dandenong Stingrays in Jaide Anthony and Ash Richards running round whilst having plenty of Richmond AFLW players in the side. Whilst Emily Harley will not be in the side this week, the Borough have Cleo Saxon-Jones and Gabrielle Seymour at opposite ends, with Kodi Jacques returning for her first VFLW game, and Sophie Locke still in contention for the the leading goalkicker. The midfield combination of Katherine Smith, Sophie Molan and Mel Kuys will be difficult to beat, but the inclusion of Magpies AFLW star Jaimee Lambert will have the opposition on notice. Teaming up with Mikala Cann, Maddie Shevlin, Abbi Moloney and Sophie Casey as regular AFLW talents, the Magpies have some good spread across the ground, while Imogen Barnett, Matilda Zander and Marla Neal are all in good form, and Jasmine Ferguson has been a rock at the back. It should be a great game, with the Magpies ticking over the wins, but the Borough having plenty of experience in this match.

A bottom two clash at Downer Oval will give Williamstown the opportunity to confirm the Seagulls will avoid the wooden spoon, and effectively lock Darebin into that position with the result. The Seagulls have created that good link with the GWS GIANTS over the past couple of weeks, and bolster the side through some up and coming AFLW talents in Tarni Evans, Georgia Garnett and Emily Pease, whilst Tasmanian Priscilla Odwogo runs out in the blue and gold once again. Perhaps the biggest name from an AFLW Draft perspective in this game is Sydney Swans Academy member Jess Doyle, who has been named on the interchange for the Seagulls to make her debut at the level. There is also a debut on the Falcons side, with Northern Knights key forward Trinity Mills named on the bench. With Jess Dal Pos as the prime mover onball, and the defensive combination of Victoria Blackwood and Gena Lawson-Tavan in the back 50, the Falcons have some composure moving the ball down the ground. The ruck battle between Sidney Cubasch (Darebin) and Elizabeth McGrath (Williamstown) is another one to watch, with Stephanie Simpson and Alyssa Mifsud both capable of kicking multiple goals on their day.

ESSENDON vs. WESTERN BULLDOGS
Saturday, May 15 @ 11:00am
Windy Hill

The latest match on the Saturday is an early 11am fixture at Windy Hill, where the Bombers who are looking to push further up the table and just solidify that finals spot, take on a desperate Western Bulldogs outfit that has to win to stay in finals contention. If you want the best chance at seeing multiple AFLW Draft prospects this weekend, then this is the game to watch. Essendon have brought back Kasey Lennox and Zali Friswell, with talented top-age draft-eligible players Neve Crowley and Emelia Yassir also making their debuts. Crowley has been named in the back six with Lennox, though could play at either end, whilst Yassir will come off the bench and likely impact midfield or forward. Friswell is in a forward pocket. For the Western Bulldogs, a trio of Greater Western Victoria (GWV) Rebels will make their debuts, with Ella Friend, Nyakoat Dojiok and Tahlia Meier all named in the Dogs’ squad. With AFLW talent in Sarah Hartwig, Jess Fitzgerald, Britney Gutknecht and Isabella Grant among plenty of others, the Bulldogs are also not mucking around with their lineup and arguably should be favourites in this game on paper alone. The key is to try and quell the strong Bombers’ midfield which includes Georgia Nanscawen, Alana Barba and Eloise Ashley-Cooper who are always finding the ball, and then Mia-Rae Clifford up forward, and Courtney Ugle creating across the ground.

In a standalone fixture on Sunday, Hawthorn will look to keep alive its slim chance of making finals with a win over North Melbourne. The Hawks have a superior percentage and have some good young talent coming into the side, with Keeley Sherar, Bridget Deed, Eloise Chaston and Matilda Hardy forming a strong Eastern Ranges contingent, and Gippsland Power’s Grace McRae returns for another week after a big Round 10 effort last week. The Kangaroos are also handing out some impressive debuts to young players they might consider for their AFLW list, with a Tasmanian trio of Ella Maurer, Jemma Blair and Amy Bissett – who are all capped at national level with the Allies at the AFLW U19 Championships – set to run out in the blue and white stripes. With Jayde Hamilton another teenager who played alongside them for the Allies also remaining in the side, and then the form of Sarah Skinner and Meagan Kiely among others, the Roos are going to make a good fist of it. The Hawks just have too much depth across the field, and with Phoebe McWilliams and Kristy Stratton up forward, Meg Hutchins down back and Georgia Bevan and Alison Drennan roving to Tamara Luke through midfield, the brown and gold deserve to be favourites here and take home the win.