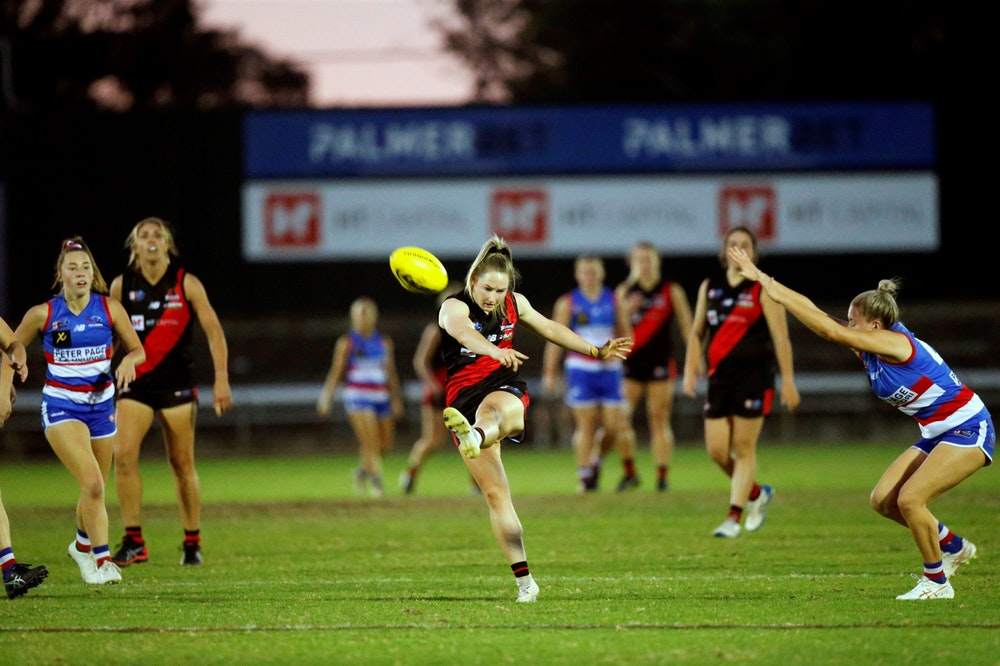 THREE teams will fight it out for the last finals spot in the South Australian National Football League (SANFL) Women’s competition as West Adelaide holds fourth position at this stage, but both North Adelaide and Central District could take it with either side winning and the other results going their way in Round 11.

NORWOOD vs. WOODVILLE-WEST TORRENS
Saturday, May 15 @ 11:00am
ACH Group Stadium

Norwood and Woodville-West Torrens are at opposite ends of the table and will open the round without a great deal of ladder permutations. North Adelaide are expected to take care of Sturt, which allows the Eagles a chance at avoiding the wooden spoon for the second consecutive year. They will need to step up from last week’s heavy loss to Glenelg, whilst the Redlegs have proven to be the benchmark team this season. They do not have anything other than form and momentum to play for heading into the last round, having already secured top spot and the minor premiership. Youngsters Lana Schwerdt and Sarah Branford have replaced Sachi Syme and Ella Murison in Norwood’s 22, whilst the Eagles have been forced to make at least three chances with Adelaide AFLW talent Renee Forth, and Lakeesha Pickett both unavailable, and Panagiota Pipinis missing due to a shin injury, Alicia McNeill could be in line for a debut in the final round, named in the side amongst five inclusions, which features Georgia Taylor and Audrey Holt. The Eagles will need to try and quell Norwood’s dominant midfield, with the likes of Sophie Armitstead, Jade Halfpenny, Jess Macolino and Elisha Gallagher among the names that roll through there. With Leah Cutting likely to have a field day given her form and size advantage over Amie Blanden, the Eagles will hope to use Blanden like another midfielder at ground level, with Jaida Tabb and Shineah Goody named onball showing the future of the side, whilst Jamie Parish and Charlotte Dolan have also been in impressive form for the visitors.

In the match of the weekend, third placed South Adelaide hosts West Adelaide in a battle where the result will either mean they likely face off again in the first week of finals, or the Panthers have a grand final rematch with North Adelaide. South Adelaide has secured its 2021 SANFL Women’s finals spot thanks to a win last week, with the Panthers’ percentage too great for the Roosters to chase down. South Adelaide would slip to fourth if the Bloods get up in this contest, but a win would see them hosting an elimination final. If they win, and North Adelaide lose then it opens the door for Central District to upset Glenelg and book its first finals spot, but the Dogs loom as outsiders at this point. In terms of the team chances, AFL Women’s talent Hannah Munyard misses out this week, with St Kilda’s Tahlia Meyer returning to the side along with State Academy member Sarah Wright, and Caitlin Ross. West Adelaide has some crucial inclusions as well, with State Academy member Keeley Kustermann returning from injury sustained at the championships, coming into the side with the likes of Louella McCarthy and Georgie Gray for an extended team. Charlie Scutchings was injured early last week and is out of the side, with Georgie Pater also the other confirmed out. South has earned the right to be favourite in this game, with the form of AFL Women’s returnees Teah Charlton and Jordann Hickey, along with Montana McKinnon and Lisa Whiteley. Add in the continued development of teenagers Gypsy Schirmer, Tahlita Buethke and Jorja Hooper, and consistency of Nicole Campbell, and the Panthers have the complete squad. West has plenty of talent itself, with the AFL Women’s contingent of Ailish Considine, Sarah Dargan and Chelsea Biddell leading the way. Lauren Young continues to have an outstanding debut season for the Bloods, with Zoe Venning and Kustermann other youngsters who can have a huge impact on the match, and Sharni Whiting being the brick wall in defence.

Whilst Sturt cannot secure a finals spot this year, the Double Blues can certainly play party pooper to a North Adelaide team which needs a win to retake fourth position on the table. The Double Blues have proved they are more than capable of kicking a big score this season, though will be tested against the most experienced defence in the league. The Roosters missed an opportunity to lock up fourth place last week, and now will be at the mercy of South Adelaide if they are to book a finals spot. They need the Panthers to beat West Adelaide, and then knock off Sturt on the road in order to leap up to fourth on the table. A loss automatically knocks them out of the running, and an upset win to Central District would see the reigning premiers slip to sixth on the table as well. Sturt have recalled three players for the clash, with dangerous forward Nicole Baker named as an in alongside Millie McCarthy and Lucy Griffith, while Abby Pengelly is the sole out at this stage. Unfortunately for the Roosters, they have had to make a couple of forced changes due to injury. Julia Clark suffered concussion in the second term of the Roosters’ loss last weekend and will miss this game, as will Jaime Norup who injured her shoulder in the same match. Coming into the side are a couple of bookends in Kelly Barltrop and Talia Radan who are important talls, whilst another State Academy member in Kate Case comes into the side after missing last week. North Adelaide should get up in this game given the Roosters have a defence that not only features Radan, but Amber Ward and Kristi Harvey are intercept machines, and the talent and run of Poppy Waterford, with the tough Jaimi Tabb and Amelie Borg. Lauren Gauci has also been a crucial inclusion to the side, whilst Ashleigh Woodland remains a difficult player to quell up forward. For the Double Blues, the midfield could try and match it with the Roosters, with Alisha Gepp, Jaimee Wittervan and Isobel Kuiper roving to Jess Good who are all in good form. Zoe Prowse has managed to get up for this game, and will rejoin fellow State Academy members Alex Ballard and Georgia Swan inside 50, while Kiera Mueller was superb off half-back last week.

The final game of the round pits second placed Glenelg up against a Central District side needing a lot of luck to secure a finals berth. The Bulldogs could grab fourth, but not only need to win, but need South Adelaide to beat West Adelaide – certainly possible – but also Sturt to upset North Adelaide – a lot less likely – in order to be playing next week. Madison Lane was stretchered off last week and will miss this game, with the likes of Chantel Reynolds, Paige Allan, Nicola Biagi and Taryn Wills named in an extended Central team. Shae Partington and Airlie Schirmer are out of the Bays’ side, and into it come Molly Affolter, Lucy Armitage and Sarah Goodwin among five chances to the side. The Bulldogs can beat anyone on their day, and with Isabelle Starmer having a good season in the ruck, and the likes of captain Shelby Smith, Caitlen Teague and Chloe Scheer impressing through the midfield, they have the core for an upset. Laitiah Huynh and Lauren Breguet are exciting young forwards, whilst Katelyn Rosenzweig with Reynolds form a great duo inside 50. The Bays have proven to hold the strongest clearance side in the business, with Ebony Marinoff returning last week with a best on ground performance, and she teamed up well with the likes of Tessa Kohn, Ellie Kellock and Jessica Bates. Brooke Tonon was superb off half-back, with Caitlin Gould and Sam Franson dangerous forwards. Overall the Glenelg side has quite strong depth, though the direct and exciting play of the Bulldogs always gives them a shot at the win.