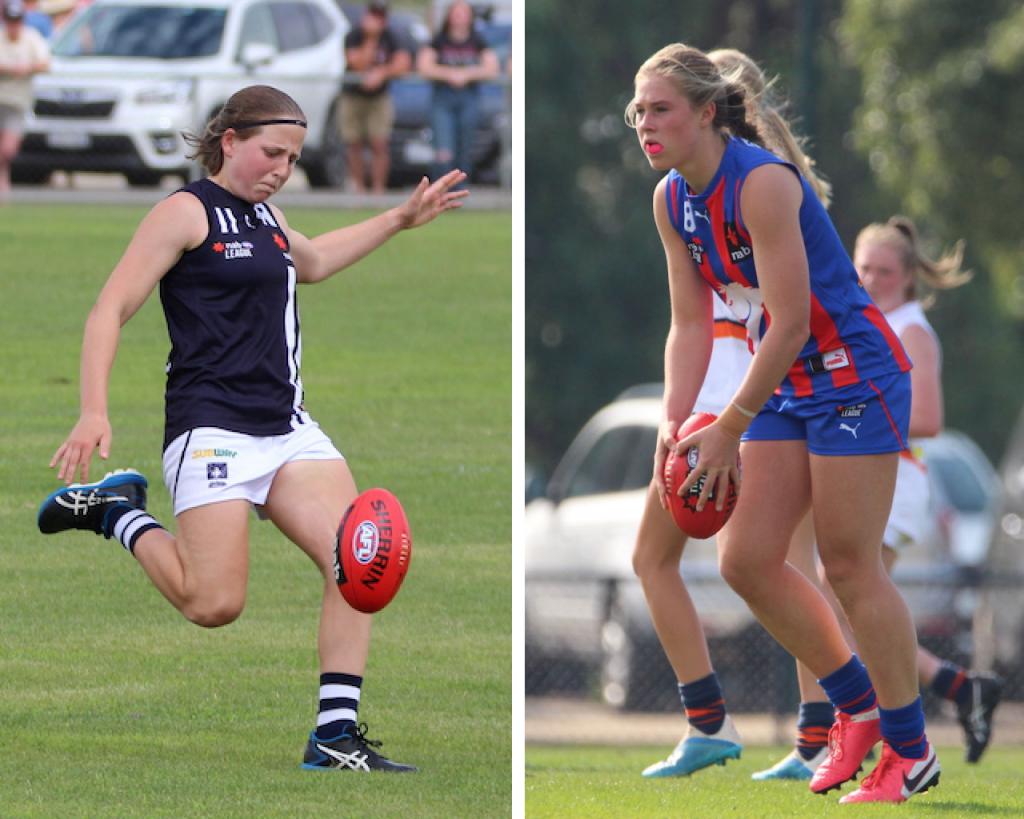 AFTER 10 home-and-away rounds and two enthralling weeks of postseason action, the NAB League Girls Grand Final is upon us. Minor premier and competition benchmark, Oakleigh Chargers, will take on Geelong Falcons on Sunday afternoon in Werribee, as the top Metro and Country regions battle for premiership glory. With both regions completing their final training sessions last night, the teams are in and raring to go. We preview the big day, looking at form, highlighting the key matchups, and getting word from both sides.

The Falcons threw a spanner in the works on the eve of the season break, handing Oakleigh its first loss for the year to the tune of 11 points. Despite leading at the first break, the Chargers fell behind as Geelong took hold in a three goals to nil second term, forming the foundations of a momentous win.

Geelong’s one-two punch of Poppy Schaap and Tess Craven proved pivotal through midfield, as spearhead forward Renee Tierney got busy in attack and the dynamic defensive duo of Annie Lee and Elizabeth Dowling was a constant obstacle for Oakleigh.

Chargers skipper Charlie Rowbottom spent more time up forward but finished as her side’s equal-top ball winner alongside Amanda Ling, as Charlotte Taylor enjoyed some time on-ball. Usual suspects Brooke Vickers and Stella Reid were also productive, but could not drag their side over the line.

The result did little to derail the Oakleigh express, as they charged on to a minor premiership and now, grand final qualification. For the Falcons, it proved a key point in their timely peak towards the end of the season, with both sides coming in off 4-1 runs and a bed of confidence.

“It was obviously a pretty good game out in Geelong and it gave our girls a good insight into the Geelong team. “We obviously couldn’t get the job done that day but it’ll give us some confidence going into the game on Sunday that we have played them before and we know a little bit about them. “A lot of the other teams we’ve played, for example Eastern (last week) we hadn’t played against before, so it was like going in unseen.” – Regional talent operations lead, Jy Bond.

“It does (fill us with confidence) knowing that we can take it to the best teams in the competition. “The style that we want to play, if we can bring that we know it matches up against most teams and keeps us in games. “That’s what we’ve talked about, making sure that we don’t stray away from that too much and just have trust in how we want to play and what we want to do.” – Talent pathways head coach, Paul Corrigan.

The skipper and potentially the best player in the entire draft pool, Rowbottom was a lock for this slot. The explosive midfielder-forward is one of the many Chargers who can rotate through multiple roles; setting the tone in midfield and providing a contested marking threat inside attacking 50. She has started at full forward in recent weeks before rolling further afield, but proves impactful just about anywhere she goes. Come finals time, the players who can produce special moments or put a side on their back are the ones who stand out, Rowbottom is one of them.

Arguably the best player in this year’s finals series to date, Craven has proven her worth as a genuine AFLW draft prospect. The tough and reliable midfielder perfectly embodies Geelong’s style; able to win her own ball and provide good pressure on the inside, before working hard on the outer to maintain possession and continue her side’s forward momentum. Craven’s decision making and short kicking game also comes into effect in general play, as she brings a strong accumulative factor around the ground. Having been best afield in her last two outings, Craven is one to stand up on the big stage.

There is always a feel good story come finals time, and that is the case to some extent for either team this time around. Jasmine Fleming has been a terrific addition for Oakleigh, fitting seamlessly into an elite midfield and boasting the added string of forward craft. The bottom-ager, who is also a fine cricketer, debuted in Round 9 and returned last week for another sensational showing, making her impossible to look past for the grand final squad. For Geelong, Ingrid Houtsma makes an incredibly timely return after being forced out via a head knock, named on a wing for Sunday’s game. She is a versatile type who can play on each line, impacting with each possession.

“We play our girls through a variety of positions to enable them to be seen by the AFLW recruiters… it’s not by designing those rotations on winning games, it’s more about exposing them to new positions and finding out where they fit and what’s going to put them in the best position to get drafted. “We’re at the stage now where we’ll use those girls in the most damaging positions to perform best on the big stage. “If you’re in the big dance it’s one more time to show your ability to AFLW recruiters.” – Jy Bond

“We’re strong with what we want to bring with our pressure around the ball and in the contest as well. “We feel that if we can match it in there and then get the ball to the outside, our strengths as a group are that we can move the ball quickly, get it inside 50 and we know we’ve got lots of options that can hit the scoreboard as well.

“I think the last two games in finals, it was a really tough tussle against Greater Western Victoria last week, a really strong contested-type game with high pressure inside. “The Dandenong game too, we were able to get the ball to the outside, gain field position forward of centre and get some inside 50s and were able to score as well. – Paul Corrigan

“I’m really proud of the way the girls have handled this year. “It’s been a pretty busy year for our coaches, staff and the girls, and we couldn’t be happier with how they’ve progressed through the year and just kept getting better week by week. “That’s all we can hope for, that they can go out there, have fun and hopefully for them they get the job done. “If they don’t we’ll celebrate the season regardless.” – Jy Bond

“We’re looking forward as a club on Sunday to putting our best foot forward and I’m pretty proud with the way our girls have gone about it and all our staff as well. “Win, lose, or draw we’ll be looking to do our best, but we understand too that Oakleigh is a very strong side and we have to bring our best on Sunday to match it against them.” – Paul Corrigan