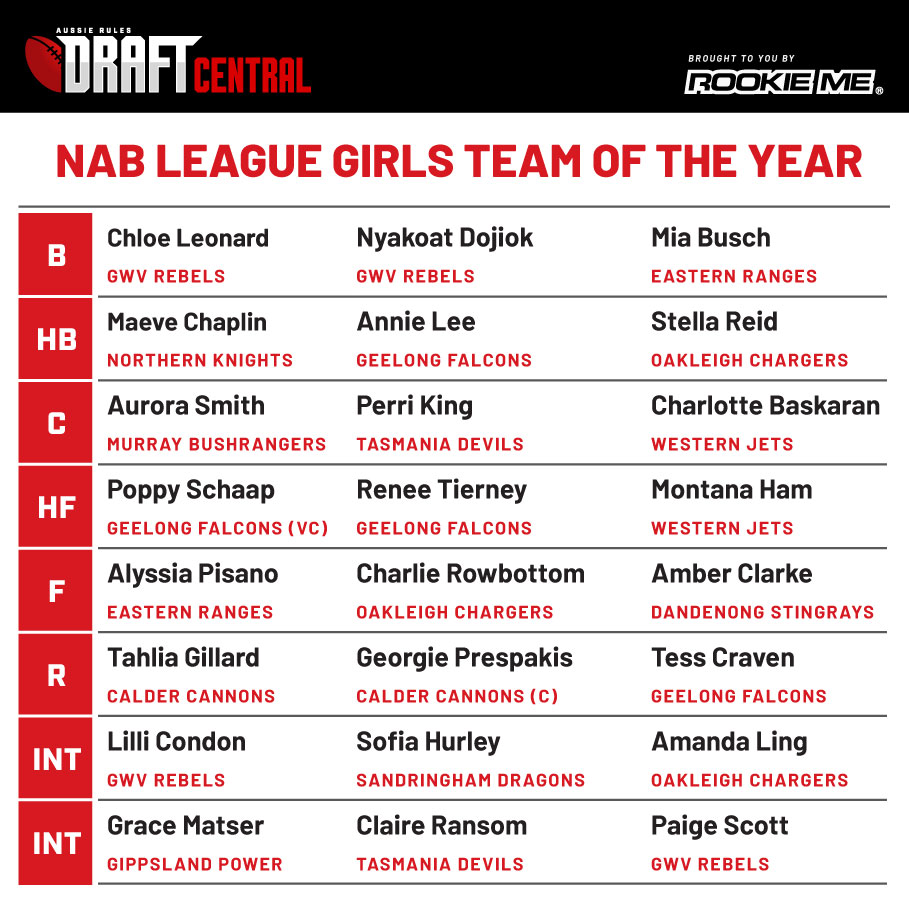 GRAND finalists Geelong Falcons and Oakleigh Chargers, and losing preliminary finalists Greater Western Victoria (GWV) Rebels have led the way with the 2021 Draft Central NAB League Girls Team of the Year. The trio have combined for 11 players in our 24-player side, with other losing preliminary finalist Eastern Ranges, as well as finalists Tasmania Devils and Calder Cannons, and Western Jets each having two players apiece. Dandenong Stingrays and Northern Knights were unlucky to only have the one player this year, with the other non-finals sides in Murray Bushrangers, Sandringham Dragons and Gippsland Power having the one, and Bendigo Pioneers not having a first team representative.

Calder Cannons’ Georgie Prespakis has been named captain of our NAB League Girls Team of the Year after a record eight nominations this year. The potential top pick will share leadership duties with Geelong Falcons’ Poppy Schaap, who after six nominations, was handed the vice-captaincy. Prespakis is joined in the side by ruck/forward and fellow AFL Women’s Academy member, Tahlia Gillard. The Falcons have the equal most representatives in the team, with consistent midfielder Tess Craven, key forward Renee Tierney and defender Annie Lee all making the starting side in the most represented side in the starting 18.

Rounding out the starting onball group is another AFL Women’s Academy member in Perri King, with the Tasmania Devils talent standing up this season through the midfield. She will team up with bottom-age talent Claire Ransom in our Team of the Year, whilst another onballer who has also played on the wing at the start of the year and previous years, Charlotte Baskaran is one of two Western Jets representatives. Montana Ham is the other Western representative in the first team, making the half-forward flank. On the other wing to Baskaran is Murray Bushrangers’ best and fairest winner and Vic Country representative Aurora Smith who was the best pure wing this season.

Looking deeper forward, Oakleigh Chargers’ dynamo Charlie Rowbottom has been named at full-forward where she often starts games before rotating through the midfield. She is one of three Chargers in the team, alongside Stella Reid (half-back) and Amanda Ling (interchange) who have both been consistent performers this season. Also deep forward is the Dandenong Stingrays’ sole representative in what was a real even team spread this year for the Stingrays, as Amber Clarke makes the side having impressed both midfield and up forward. In the other forward pocket is the youngest member of the team, 2023-draft eligible talent Alyssia Pisano, who had four Team of the Week nominations and also won the leading goalkicker award in her debut season, named in the side along with teammate and bottom-age defender, Mia Busch.

The remainder of the defence features a couple of GWV Rebels in Chloe Leonard and Nyakoat Dojiok, with a couple more in Lilli Condon and Paige Scott also squeezing onto the bench in a huge result for the club this season. Northern Knights’ Maeve Chaplin slots into half-back where she is capable of playing, as the sole representative for the Knights. The last two players rounding out the bench are sole representatives in Sandringham Dragons’ Sofia Hurley and Gippsland Power’s Grace Matser, with the latter being the rotating ruck with Gillard in the side.

The remaining 24 players filled out the impressive Second Team of the Year, with five emergencies who were the next ones just outside the squad – and received two Team of the Week nominations – all named as emergencies. These were Northern Knights duo Tannah Hurst and Ella Smallacombe, Dandenong Stingrays’ tall Mackenzie Eardley, and ruck duo, GWV Rebels’ Kalani Scoullar and Western Jets’ Krystal Russell. Captaining the side is Snell with Yassir being the vice-captain as two of the emergencies of the first team.

Eastern Ranges have four players in the side with Georgia Campbell, Keeley Sherar, Bridget Deed and Cadhla Schmidli all making the Second Team, the equal most of any side. Dandenong Stingrays also have four players in the side, as defenders Zoe Hill, Jemma Radford and Jaide Anthony – who all have VFL Women’s experience – squeeze into the back six. The leadership combination of Snell and Yassir have a teammate each in the side, with bottom-ager Octavia Di Donato, and midfielder Zali Friswell both in the starting teams.

The Gippsland Power have two players in Matilda Van Berkel and Lily-Rose Williamson, as do the GWV Rebels, with Ella Friend and Molly Walton making it in. Murray Bushrangers’ duo Ally Morphett and Keeley Skepper, and Northern Knights duo Tarrah Delgado and 2023-draft eligible Ava Jordan all represent the Second Team, with Vickers being the sole Oakleigh representative, and the team having no Falcons due to all four nominees making the First Team.

Tasmania Devils are represented by the two players in Jemma Webster and Amy Bissett, while Jemima Woods rounded out the 24-player squad by being named in the opposite forward pocket to Bissett. Sandringham Dragons did not have a representative in the side.