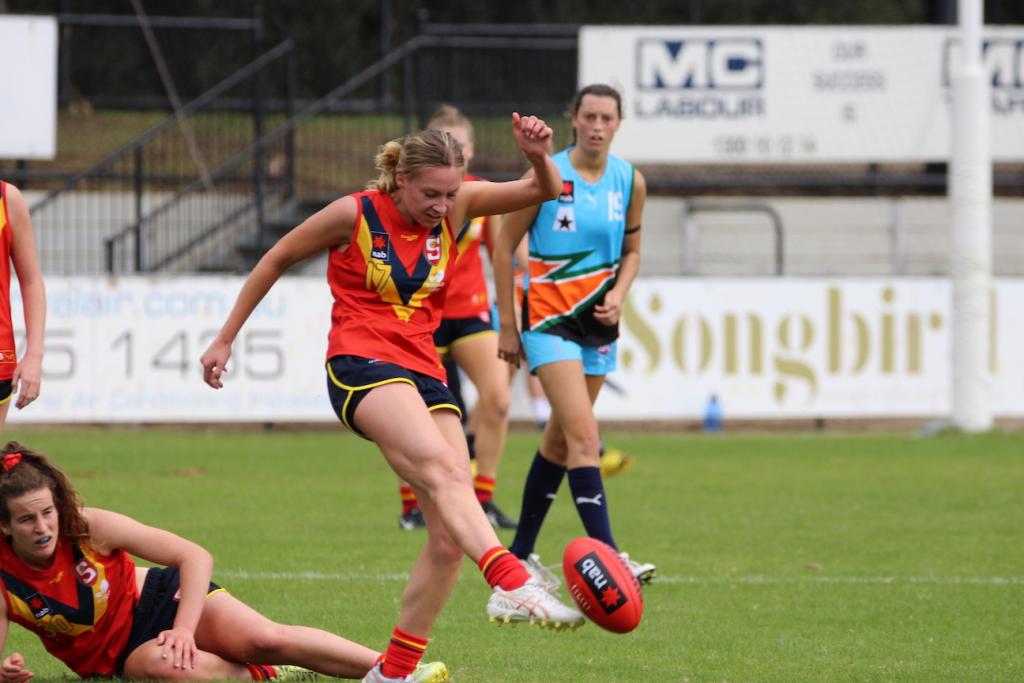 WEST Adelaide’s Scarlett Griffiths has loved being a member of South Australia’s State Academy program, describing it as a “fantastic opportunity” to test herself alongside and against the best players in the country. The teenager plies her trade in the South Australian National Football League (SANFL) Women’s competition for the Bloods, having come from a different background and transitioning into the pathway from a young age.

“I started playing football when I was quite young,” Griffiths said. “I was a ballerina and I just saw a sign that my local footy club needed girls so I joined in, fell in love with it, and yeah since I was young I’ve always been invited to these programs, and one thing’s led to another and now I’m here.”

Predominantly a forward having kicked a goal in each of her last two SANFL Women’s games, Griffiths tasted a new role further up the ground at the 2021 AFL Women’s Under 19s Championships, able to run out for the Croweaters against both Vic Country and the Allies.

“My favourite place is playing in the forward line, I’ve loved learning about that role and playing it,” Griffiths said. “And up here I’m playing on the wing, so it’s a big change, and I’m learning more about the role as the week goes on.”

Despite losing both the clashes in Victoria, the teenager said she had loved the opportunity she had been given, and was always looking to improve aspects of her game such as reading the play and knowing when to run and properly execute her speed and athleticism.

“It’s been such a fantastic opportunity to play with the Academy squad and back at home everything’s been really, really great and it’s just been getting better,” Griffiths said.

Having come from West Adelaide, it is little surprise to see Griffiths’ role models and inspirations being a pair of pocket rockets from the Bloods who have overcome various adversities from knee injuries to being overlooked to play at the elite AFL Women’s level.

“I really look up to Hannah Button and Rachelle Martin, they’re sisters from the Crows,” Griffiths said. “They’re my biggest inspirations. “They’ve been mentoring me for the past three years, so I’m so grateful to have them and they’re so awesome.

“It’s so good to see them on the TV, especially Rachelle, they’re just incredible, they totally deserve to be there.”

Like may players in their top-age draft year, Griffiths said her life was fairly busy between the three key aspects of life.

With West Adelaide on the verge of backing up their maiden finals series last year by grabbing fourth spot heading to the final round this week. The Bloods will need to topple third placed South Adelaide in order to secure a finals berth, but if they do, then Griffiths will be hoping to have an impact on the scoreboard in the post-season series.