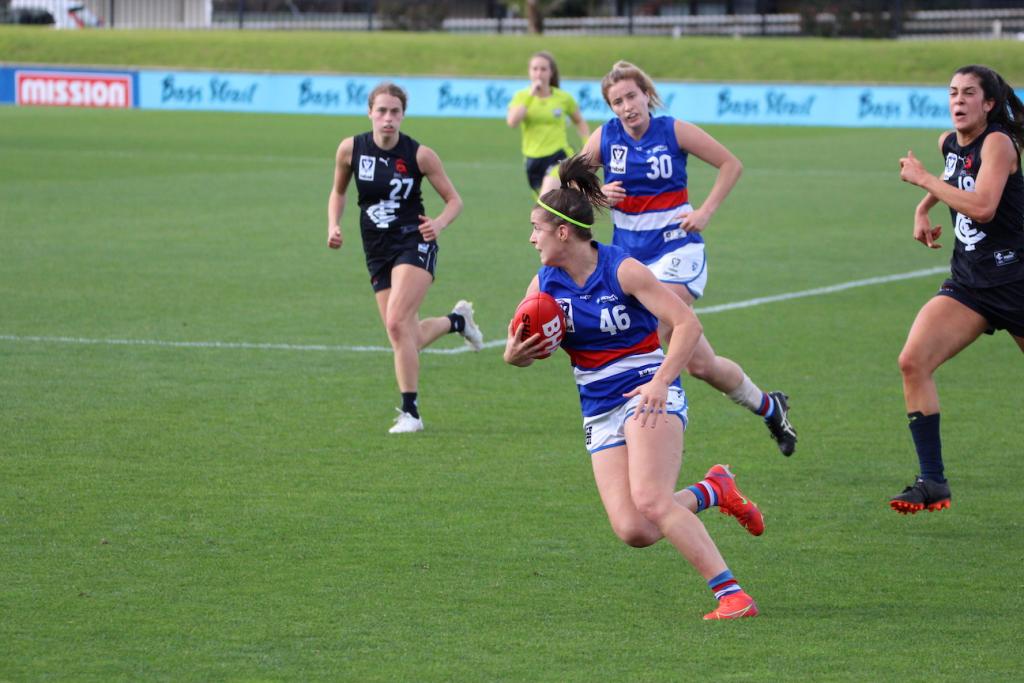 TEAMS have entered the final month of the Victorian Football League (VFL) Women’s season and NAB League Girls and AFL Women’s players are now regularly filtering through teams. With the AFL Women’s Draft always a talking point, it is worth remembering some of the VFL Women’s listed players who have held their spots and had really promising seasons. Whilst the below does not include everyone, there are a few names from each team named to keep an eye on.

The Magpies have no shortage of VFL Women’s listed talent to keep an eye on. Imogen Barnett has been a powerful force up forward, slotting 11 goals in nine games and not only averaging the three marks, but the 2.7 tackles per match as well. In defence, Jasmine Ferguson is having a terrific season playing on some quality forwards, having really developed each season since her initial days with Gippsland Power. Marla Neal through the midfield has had a purple patch and is as hard as they come, whilst midfielder/forward Matilda Zander has kicked the seven goals and provide the speed and defensive pressure that could see former Norwood mentor Steve Symonds opt for the talented small.

The Cats’ AFL Women’s talent has certainly been a driving force through the midfield this year, but a couple of hard-at-it midfielders in Paige Sheppard (20.2 disposals, 6.0 tackles) and Tamara Smith (17.5 disposals, 10.8 tackles) are doing their chances no harm with great in-and-under work and spreading to the outside. Claudia Gunjaca is another one who has really caught the eye this season, whilst defender Breanna Pratt has been amongst the best VFL-listed talents for the Cats.

Ex-Murray Bushrangers talent Sophie Locke has developed into an exciting forward who has an eye for goals and would be one that needs to be in consideration to step up, whilst injury replacement player Hannah McLaren continues to be a standout ball-winner at VFL Women’s level. Add in ex-Richmond forwards Emily Harley and Cleo Saxon-Jones who are searching for new contracts, and the Borough have some talents with experience that could step up and earn new contracts with other clubs.

Eliza West has enjoyed an incredible season with the Demons and is a readymade talent if given the chance to step up. Grace Buchan has not missed a beat since crossing from the Magpies and has been reliable ball user in the back half, whilst Imogen Milford has been the dominant goalkicker this year. Emma Humphries has the AFL Women’s experience in the past to slot straight into a contender if required.

Georgia Nanscawen should be the top pick when it comes to selecting mature-age talent out of the VFL Women’s, as a genuine best 21 player at AFL Women’s level when fit. She is averaging 23 touches and almost 10 tackles, including a game where she was injured early. Fellow midfielder, Alana Barba remains on the radar for her attack on the contest and around the ground, whilst Courtney Ugle and Eloise Gardner are among a host of Bombers players that have traits which could be utilised at the next level.

A tall versatile option, Tara Bohanna has been a reliable source of goals for the Saints, able to roll through the ruck as well as provide strength in the air and on the ground for 16.2 disposals, 4.3 marks, 4.5 tackles, 7.4 hitouts and more than a goal a game. A mature-age midfielder Hannah Stuart is one for the immediate-impact group, averaging almost 18 touches and six tackles as a tough inside ball-winner, whilst Gabbi De Angelis has always had some special traits since coming through the Eastern Ranges, and Valerie Moreau is one of a number of Saints enjoying good seasons.

The AFL Women’s contingent has definitely bolstered the Western Bulldogs’ squad, but in terms of mainstays only two players have played every game. Brooke Hards has been utilised in a multitude of positions and settled at half-back of late whilst rotating through the midfield, possessing great pace and game-breaking ability across the ground. Simone Ruedin is as reliable as they come, and if a club was locking for a rock-solid defender, there have been few better this season. Ruck/forward Molly Denahy Maloney has some eye-catching traits that might catch the eye, whilst Katelyn Betts has shown versatility and hardness around the ball.

The Hawks have a plethora of recently delisted AFL Women’s players that could slot all over this list, with Tamara Luke, Alison Drennan, Kristy Stratton and Georgia Bevan among the long list of talents with prior AFLW-experience. From a VFLW-listed perspective, Jessie Williams‘ development up forward with seven goals in 10 games, as well as young gun and speedster Dominique Carbone and consistent talented midfield Olivia Flanagan among those with some exciting traits to keep an eye off.

North Melbourne has promoted quite a lot of its VFL Women’s talent this year, with Meagan Kiely and ex-Darebin talent Molly Eastman among the names that the club, or other clubs might consider for the pure ball-winning consistency. Perhaps the most damaging one could be forward-cum-midfielder Sarah Skinner who not only can wreak havoc inside 50, but go inside and find a truckload of the ball as well. Alexia Hamilton is an ex-Sun who has been reliable in the ruck and as a forward target who might earn a call-up.

Akayla Peterson has been a standout this year, able to play in a multitude of roles, booting five goals playing up forward and in defence, and being able to slot in anywhere. Jorja Borg has been a dominant ruck through that role, while defender Ally Bild is only about to turn 22-years-old and has made strides since crossing from the Magpies. She only played the four games this season, but Jennifer Lew‘s impact in defence was noticeable for the Navy Blues, averaging 18.5 disposals and 5.3 marks in that time.

The Seagulls might not have had a lot of AFL Women’s experience prior to the GWS GIANTS joining forces, but have had some reliable ball-winners. Megan Williamson is a player who could step up as a readymade inside midfielder, while it is hard to look past the influence that Erin Meade or Aimee Whelan can have on a game, whilst Elizabeth McGrath had almost 60 hitouts recently against one of the premier rucks in the competition.

Gena Lawson-Tavan has been a rock in defence for the Falcons this season playing every game alongside Samara David who has been one of the premier markers of the competition, also booting five goals in 10 games. Sidney Cubasch has been a reliable ruck option each week she has played, while Victoria Blackwood is still young and developing – only turned 21 in December last year – and really stepped up this season.