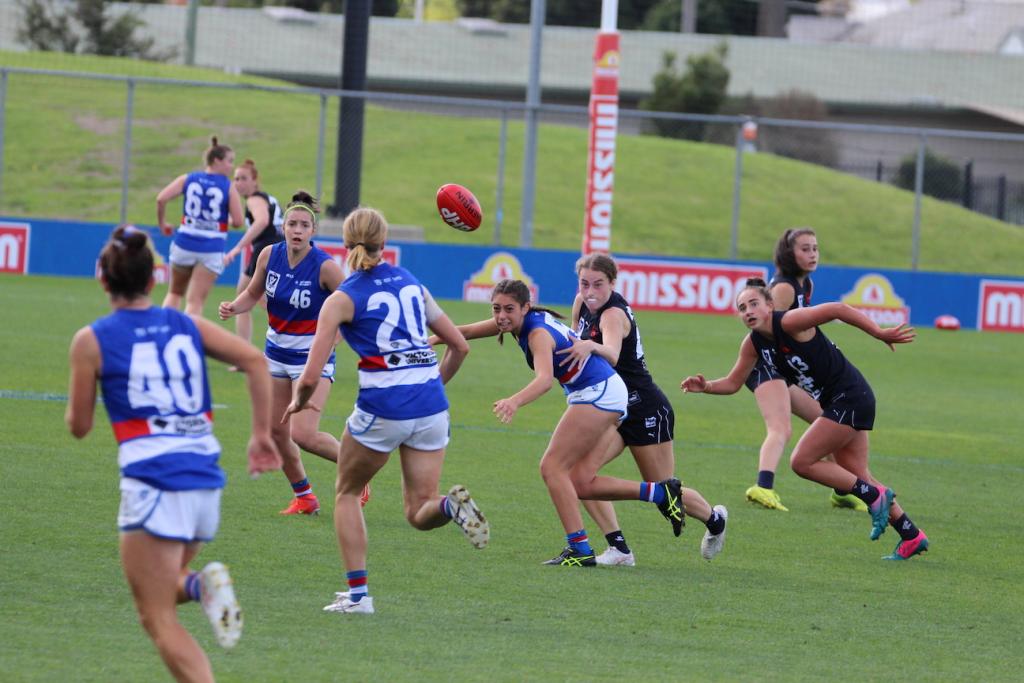 A HEAP of young prospects continue to filter through the Victorian Football League (VFL) Women’s competition, with the revamped structure allowing Under 18 and 19 NAB League players to align with state league sides as both seasons run concurrently. As the NAB League season draws to an end, Round 10 saw plenty of young talent scattered across each state league side. We take a look at how VFLW-listed players who currently compete in or have recently graduated from the NAB League, performed.

Hawthorn second-gamer Grace McRae was one of the more impressive current NAB Leaguers to ply their trade at senior level in Round 10, collecting 21 disposals and laying nine tackles in the Hawks’ win over Darebin. Eastern Ranges graduate Jenna Richardson was also solid with 10 touches, as Maddi Shaw and Chloe O’Malley also contributed in brown and gold. For Darebin, Calder Cannons tall Peppa Poultney turned out for her second game and managed nine hitouts.

A good number of Western Jets products continue to get a look-in for the Western Bulldogs, making an impact in their new side’s win over Carlton. Second-gamer Stephanie Asciak earned votes for her nine disposals, while Nikita Wright had 12 and took three marks, and Caitlin Sargent registered two behinds up forward. Former Bendigo Pioneers skipper Brooke Hards continues to be a mainstay in red, white and blue, as Marnie Jarvis enjoys an extended run for Carlton.

Geelong’s winning streak rolled on with a sixth-straight triumph on Saturday, this time over Essendon. The likes of Paige Sheppard (18 disposals, four marks) and Tamara Smith (16 disposals, 10 tackles) again made an impression among a host of AFLW-listed talent. For Essendon, Eloise Ashley-Cooper and Alana Barba each managed 15 touches, with the latter also booting a goal. Bendigo Pioneers top-ager Jemma Finning also made her debut in the sash with five disposals and five tackles.

Despite going down in an upset loss to Southern Saints, Port Melbourne managed to field some promising youngsters on Saturday. Dandenong Stingrays pair Jaide Anthony (10 disposals, four marks) and Ash Richards (one goal) made their debuts, playing against NAB League teammate Jemma Radford. Emily Harley was named best afield for the Borough as one of a few former NAB Leaguers in this game to have also been drafted. Meanwhile, Gabby De Angelis impressed for the Saints with 15 disposals, four marks, and five tackles.

In Collingwood’s big win over North Melbourne, tall utility Neve O’Connor took on some added ruck duties to finish with a game-high 23 hitouts, far and away her best return in that department for 2021. North was served well by Ciara Fitzgerald (13 disposals, three marks), as Jayde Hamilton earned consecutive appearances, and Tasmanian Camilla Taylor made her return.

Casey was served well by a couple of young talls in Bridie Winbanks (30 hitouts) and debutant Grace Matser (16), while the latter named among her side’s best players. Emma Horne also got her hands dirty for the Demons with six tackles, while Ruby Tripodi was among Williamstown’s better performers as a bunch of GWS-listed talent hit the state league.