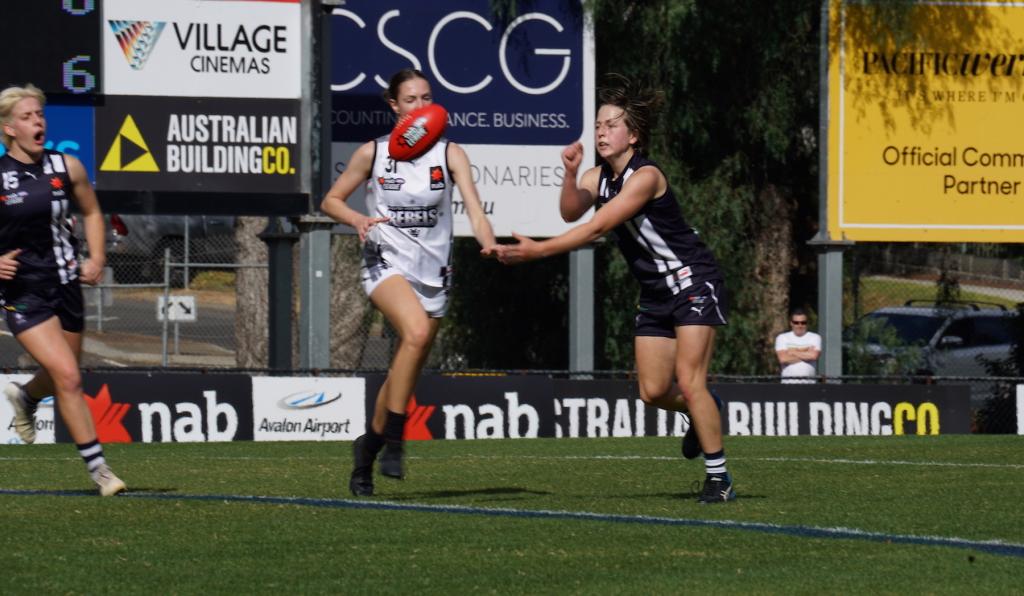 THE 2021 NAB League Girls grand finalists were decided on Saturday, via an enthralling double-header at Avalon Airport Oval. Our weekly (self explanatory) Top Performers series delves into some of the best individual feats across each weekend of action. This week produced plenty of highlights as players continue to impress in the elite talent pathway. Starting with AFLW Academy-listed prospects, we take a look at the top performers out of an exciting set of fixtures.

Each game’s top performers are the opinion of the individual writer.

Starting each quarter up forward as she has done for the past few games, Rowbottom continues to be a commanding presence wherever she lines up on field. She lead well in the forwardline, and whilst not always holding the mark she would generally knock it to the advantage of teammates to run onto. When she got a clean opportunity inside forward 50, she was far more keen to pass it off to other teammates than take shots herself. She showed off her power around stoppages and on the inside with some good burst to run onto and win the contested ball, even delivering a few fend-offs in the third quarter. She came out comfortably on top over any player that tried to run with her through the midfield, able to cover the ground and work hard to get back and help in defence better than her opponents.

Looked dangerous in the forward 50, with her past two games having been good performances, just missing the finishing touch at times. James looks really good with her leap, and whilst not dragging in every mark, she managed to get a touch on more often than not, tapping it to players on the ground. She is no slouch with her own work at ground level either, having a few clean one-grab pick ups in the forward 50.

It is unbelievable to think that this was just her second appearance at this level. Looking comfortably one of Oakleigh’s best players and biggest ball winner for the game, Fleming was a force through the midfield. Her work around stoppages was particularly good, winning the first of the day with a good burst of speed straight through the pack, before continuing that throughout the game. She had one of the plays of the day where she won the ball on the wing, took a bounce whilst burning an opponent and kicked it to the top of the 50, then ran past to receive the handball and then delivered it well to Charlie Rowbottom, who unfortunately missed the goal. That precision kicking and hard running for handball receives was a constant through the game, making all of her disposals damaging.

After an impressive showing last week against a taller Calder forwardline, Woodford followed up, playing a crucial part in the backline. She positioned well behind the play, taking a few intercept marks without much issue before looking to kick long forward to numbers. Woodford also positioned well in contests to get front position, meaning she could run onto the ball if it was spoiled by opponents.

Having moved up forward for gradually longer stints over the season, it appears Reid is fully comfortable as a mainstay in the Chargers’ forwardline now, becoming a regular and reliable goal kicker, and target in the forward 50. Her leading patterns are impressive, particularly given she does not need much time or space to make things happen, reacting quicker than her opponents to get to good spots without much pressure, while also working them over. She was also good at looking for teammates inside 50 rather than blazing away.

Busch has been a highlight for Eastern over the season and continued to live up to that against the Chargers, once again showing exceptional positioning behind the ball. She constantly moved towards it to get an intercept possession higher up the ground, taking it at speed and then kicking forward, looking to put it in front of leading teammates. The bottom-ager moved into the midfield in the final quarter and looked more than comfortable, suggesting a positional switch for season 2022.

Whilst she struggled to have the impact around the ground she has become renowned for, Campbell took advantage of her superior athleticism in the ruck to win almost every ruck contest she was involved in, with a game high 27 hitouts being her biggest return for the year. Even though she did not win a whole heap of ball around the ground, her follow up work around stoppages was impressive, getting low a few times and firing out handballs to teammates running past.

A few factors have set Sherar out as a prospect for this season, with her burst of speed and ability to find the ball two of them. She managed to show those off once again in her last NAB League game for the season. What was also impressive from Sherar was the fact she was an aerial threat around the ground, showing off an impressive leap when required. While she seems to favour kicking, her hands in close are really impressive, with the ability to spot teammates through traffic and find a way to get it to them.

Alexandra McCulloch was impressive in defence for the Chargers, almost playing as an extra midfielder at times with how high she got up the ground. Amanda Ling and Brooke Vickers, whilst not as prolific as usual, were still influential for Oakleigh in the win, as was Charlotte Van der Vlies. For the Ranges, Bridget Deed was a strong winner on the inside for the day, offering assistance in defence as well. Matilda Hardy had arguably her best performance for the season on the wing, having some moments where she showed off her pace.

Had a difficult day looking for ways to get in it, being thrown about from the forwardline, to the wing, to the backline on multiple occasions. Although she struggled to get much of the ball or show off her usual high-level marking, Friend still commanded a player constantly on her and used the ball well when she did find it.

Starting the game in her usual backline role, Dojiok tried her best to intercept and impact the ball to different levels of success early on. She nabbed one particularly memorable intercept possession in the second quarter along the wing, where she went for a run and bombed it deep inside forward 50 to give GWV a chance to score. She moved into the midfield for a short period in the second half which worked wonders for her, and the Rebels, winning the contested ball with ease as a taller player through the engine room. She even got herself a goal for her troubles. That move looked to have given her confidence, as she returned the backline and looked far more assured and confident in her attack on the ball.

It may have been her final game of the year at NAB League level, but fans and recruiters alike should be excited that we get one more year of Scott with the Rebels. After an impressive showing in the Country representative games, she came back to the NAB League in hot form, kicking five goals prior to the match with Geelong. She started the game in the midfield, winning the first clearance with ease and setting the tone for a really strong display. She continued to show her strengths, taking some contested grabs as a forward and looking dangerous on the lead. What was most impressive about this game was her increased work-rate and intensity, where her second and third efforts got her a second goal. In that instance, she dropped a mark but followed up with a tackle, knocking the ball loose and then putting it through the middle. She looked strong as a contested ball winner, running in and bursting out of the pack, then kicking long to get space.

Would have to be the form player of the competition currently, and is timing her run superbly as she helped book the Falcons spot in the grand final next week. Craven showed off immense stoppage craft all game, as one who regularly timed her runs to hit the ball with speed when it left the rucks’ hands, taking advantage of knowing where the ball was going each time. Once she started, she looked near impossible to stop. It has been noted previously that she is good at hitting those shorter kicks rather than bombing long, and she continued doing that this game, looking for and finding those kicks that would’ve been no more than 15 or 20 meters. They put the Falcons in a better spots to move forward. Craven showed she knows when to handball or kick as well, balancing well between them and not being overly reliant on either skill.

A really consistent ball winner and strong inside player for the game, Simpson’s strength and ability to stand strong in tackles was extremely impressive. She would also get her arms free in those situations, where she was able to handball off to a teammate in space, or throw it on the boot to keep the Falcons moving forward. She was sound defensively around stoppages as well, regularly wrapping up Rebels players that broke free with the ball.

Meier is one of those zippy small players that just excites with her speed, agility and work-rate around the ground, especially the forward 50. That work-rate was highlighted constantly, as she kept going for second, third, and fourth efforts when around the ball, and it led to some almost moments in the forward half, where she almost broke away and got a goal at times, but the Falcons’ defensive setup kept her from snaring a major score.

Leonard has been one of the most consistent performers for GWV this season, and she stood up through the midfield for them against the Falcons in what will be her last game for the Rebels. Leonard positioned well throughout the game, sweeping up or marking uncontested hack kicks forward from the Falcons, but also attending stoppages to be a handball receive option before delivering well measured kicks forward.

Schaap struggled to get into the game early, held well by the bottom-aged Rebel Molly Walton in the first quarter, not something she has had to deal with of late. It did not last long though, as Schaap started to work more and more up the ground to get involved outside the forward 50, impacting every contest she was near – either winning the ball herself or laying a tackle to get it to spill for a teammate. Once again she looked good using the footy, with her quick hands to teammates in space particularly impressive.

Lee continued on from her good home-and-away season form. As arguably the biggest aerial threat afield, she punished the Rebels early on when they attempted to kick inside 50 without penetration behind their kicks. As usual, she used the ball effectively by foot as well, being another one that looked to move the ball into more central spots to open up the ground going forward.

Molly Walton and Lilli Condon were two more that stood up at times through the contest for GWV, with Walton continuing to be an essential part of the Rebels’ defence and Condon showing off her speed and inside ball winning. For the Falcons, there were plenty of others that contributed well. Kara Stacey and Ash Van Loon were two that went through the midfield at times and provided a bit of spark. Renee Tierney was opportunistic in the forwardline, rewarding well placed kicks from midfielders and hitting the scoreboard.