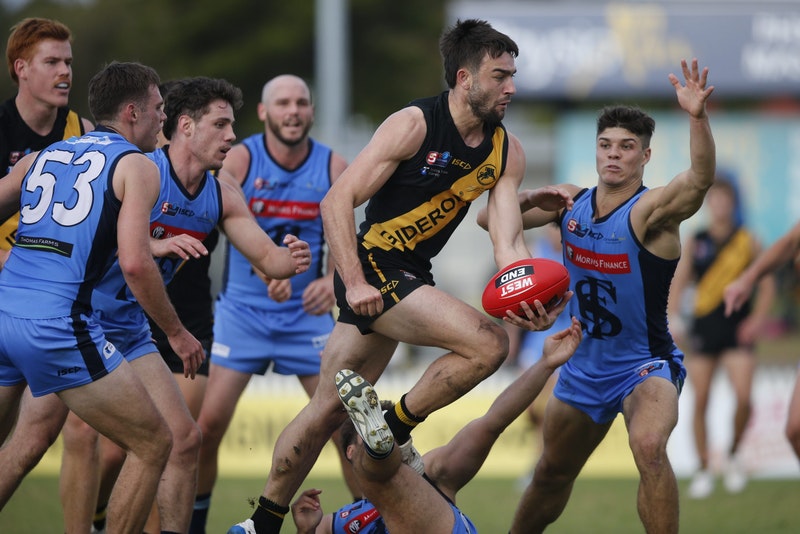 STATE league football entertained audiences across the country on the weekend as sides played out some thrilling contests. There were plenty of finals ramifications across the weekend’s results, as the race up the ladder heats up.

The VFL action was limited this weekend with most AFL affiliated sides not competing due to a bye as they look towards the next round of action. The weekend was not completely void of action though, as the Western Bulldogs held off a brave final quarter fightback from Carlton to walk away with a three-goal win at VU Whitten Oval on Sunday afternoon. In an inaccurate day for both sides, the Dogs looked to have the game wrapped up as they headed into the final term with a five-goal lead, after the Blues kicked 2.10 over the first three quarters. The Blues booted 6.1 in the final quarter to give themselves a chance to steal an unlikely victory, but the Bulldogs were able to weather the storm to record their fourth win to shoot up to top spot on the ladder. 2020 number one draft pick and Bulldog Jamarra Ugle-Hagan, possibly the most watched player in the VFL, copped a brutal head knock in the first quarter, ruling him out for the rest of the game. Mitch Wallis continued his strong form of late with 29 disposals and a goal, while ex-Magpie Ben Crocker booted four goals for Carlton.

Round six of SANFL action kicked off with a thriller, as South Adelaide snuck past Woodville-West Torrens by eight points at Maughan Thiem Kia Oval on Saturday afternoon. A three-goal burst from South Adelaide gave them a match-winning lead, as their opponents could not close the gap in time despite their best efforts with a late goal. For the winners, Bryce Gibbs was exceptional with two goals and 21 touches through the midfield as he continues his strong season, while Jake Tarca booted four crucial snags up forward. For the Eagles, James Tsitas and Jack Hayes worked hard through the engine room as you would expect, while Troy Menzel’s four goals kept his side in the hunt.

Central District’s struggles for the season continued as they fell to Norwood by 32 points at X Convenience Oval on Saturday afternoon. Norwood dominated all day, with forwards Cameron Shenton and Jackson Callow combining for seven goals up forward to torment Bulldog defenders all day. Through the middle, Matthew Nunn extracted five clearances, while for the Bulldogs, Travis Schiller and Darcy Pisani combined for 14 clearances as they battled hard to get their side back in the game.

The highly anticipated showdown did not disappoint as Port Adelaide held on to defeat an inaccurate Adelaide by 14 points at Adelaide Oval on Saturday afternoon. As a curtain raiser for the AFL Showdown, the two sides went to war, and the Power’s first half looked to set up a sizeable win, but a five-goal to one third quarter meant suddenly the game was back on. Adelaide will be rueing a lost opportunity having kicked more scoring shots than their opponents. For the Power, Riley Bonner stood out, booting two goals from 26 disposals in an eye-catching display, while skipper Cam Sutcliffe was typically impressive. For the Crows, Chayce Jones continues to thrive in his new role at half-back, racking up 27 touches.

A monster game from North Adelaide forward Lewis Hender saw the Roosters crush West Adelaide at Prospect Oval on Sunday afternoon in a Mother’s Day clash. Hender booted eight goals in a dominant display, even more impressive is that he only took three marks, kicking plenty of goals from ground level. His midfield teammate Billy Hartung had 33 touches and 10 marks of his own. For West Adelaide, Kaine Stevens fought hard all day to find the ball 28 times, while Thomas Keough kicked three goals.

Glenelg’s undefeated streak suffered the biggest of scares on Sunday afternoon, as they held off a determined Sturt side to take home a four-point triumph at ACH Group Stadium. Luke Reynolds’ third goal of the day came at the 26-minute mark of the final term to put his side in front for the final score of the day. Reynolds combined with teammate Lachie Hosie combined for six goals to provide crucial scoring output for the victors. Through the midfield, the league’s leading ball winner Luke Partington lived up to the title, putting in a best afield performance with his 29 touches. For Sturt, James Battersby led all comers with 35 disposals in a valiant effort.

Subiaco were able to snatch top spot on the ladder with a 40-point victory over a previously undefeated Claremont side at Leederville Oval on Saturday afternoon. The match was strongly anticipated heading into round six, and Subiaco were able to cause a crucial upset as they outplayed their opponents all day. Nicholas Martin led the way for his side, booting four snags from 20 disposals in an impressive outing, while teammate Lachlan Delahunty racked up 29 touches and 12 hitouts. For Claremont, Lachlan Martinis had 26 touches and Alexander Manuel kicked three goals.

An eight goal first term set up Peel Thunder for a 15-point win over Perth at Mineral Resources Park on Saturday afternoon in front of 1,268 fans. The Thunder were clinical in the first term and despite a spirited effort from Perth to drag themselves back in the game, the margin proved too strong as the victors recorded their third win of the season. For the Thunder, Kristian Cary’s four goals were handy while Jacob Coniglio had 26 nice disposals. For Perth, Tyrone Thorne was exceptional with 29 disposals and two goals.

Fans at Provident Financial Oval on Saturday afternoon were treated to a miraculous comeback, as West Perth came from nowhere to steal a nine-point victory over Swan Districts. West Perth trailed by 15 points heading into the final term, before kicking four unanswered goals to walk away with an impressive win. Shane Nelson was instrumental for the victors, racking up 35 touches and eight tackles. For Swan Districts, ruckman Corey Gault dominated with 26 disposals and 36 hitouts for the day.

East Perth have found themselves still searching for their first win, after falling agonisingly short against South Fremantle, with only seven points separating the sides at Fremantle Community Bank Oval on Saturday afternoon. The final quarter saw a slight sniff of a comeback for East Perth, but South Fremantle weathered the storm to walk away with the crucial win. For the winners, Haiden Schloithe continued his outrageous form, finishing the day with 35 disposals and three goals, clearly the best player on the ground, while Aidan Lynch was strong for East Perth with 29 touches of his own.

East Fremantle players celebrated the weekend in ruthless fashion, crushing West Coast by 125 points at New Choice Homes Park on Saturday afternoon. The game looked one-sided from the very first bounce, as the victors were able to do as they pleased with little resistance from their opponents. Blaine Boekhorst amassed a whopping 41 touches through the midfield, while Jonathon Marsh booted seven goals in the win. West Coast’s Xavier O’Neil was a bright spot for his side with 34 touches.

Round six of the QAFL started with Surfers Paradise blowing out Noosa to the tune of 70 points at Sir Bruce Small Park on Saturday afternoon. An eight goal second term proved too much for the visitors, as they were convincingly beaten for all four quarters of the match. For Surfers Paradise, Sam Hilton-Joyce booted four goals in a best on ground display, while Noosa’s Riley O’Dwyer impressed in a tough loss.

Moving to Cooke-Murphy Oval, Labrador pulled off an impressive comeback, defeating Mt Gravatt by 25 points thanks to a strong final quarter on Saturday afternoon. Trailing by 22 points at quarter time and nine points at three quarter time, Labrador rallied to kick five unanswered goals in the final term to steal an unlikely win. For the victors, Charlie Lang delivered his best performance of the year and was crucial in bringing his side back into the contest. For Mt Gravatt, Gareth Hunt impressed, particularly in the first three quarters when his side was in control of the contest and can hold his head high.

Maroochydore stamped their authority on the rest of the competition with a dominant 66-point crushing of Sherwood Districts at Sherwood Oval on Saturday afternoon. Maroochydore took the lead early in the first term, and never surrendered it, cruising their way to a nice percentage booster. Benjamin Sloan was impressive in the win, while Mitchell Scholard and Benjamin Thomas combined for eight goals. Riley Greene tried all day for Sherwood Districts.

Broadbeach maintained their title as the competition benchmark with a 54-point triumph over Wilston Grange at Hickey Park on Saturday afternoon. Forward Jordan Moncrieff booted nine goals in a powerful performance to drive his side to victory, as Broadbeach remain undefeated after five games, and will take some beating. Hugh Fidler battled hard for Wilston Grange despite the one-way traffic.

Launceston remain undefeated after defeating second-placed Clarence at Blundstone Arena on Saturday afternoon. There were questions around whether or not Launceston could hold off the surging Clarence side, but they dominated them all day, keeping them scoreless in the first quarter to take a 37-point lead into the first break. They never looked back and cruised their way to a strong triumph. Jack Tuthill was impressive in the backline, while Jake Hinds did not miss a beat in his return from suspension. Jarrod Harper was Clarence’s best in a tough day at the office.

An eight-goal opening term set up Glenorchy’s big win over North Hobart at North Hobart Oval on Saturday afternoon. Despite breaking their losing streak last week, North Hobart couldn’t convert in front of goal, kicking 3.13 for the day, ruling out any chance of a comeback. Glenorchy’s Daniel Joseph continued his strong run of form with a best on ground performance, while North Hobart’s Hugh Nj Williams fought hard all day despite the loss.

North Launceston a strong scalp for the season, taking down the Tigers at UTAS Stadium by 31 points in the final game of the round on Saturday afternoon. The Tigers started the season in blistering form, but the Bombers proved too strong, running away with a handy win. Bomber Bradley Cox-Goodyer returned to the side to deliver a best afield performance with two goals from the midfield, while Tyler Carter booted three goals for the Tigers.