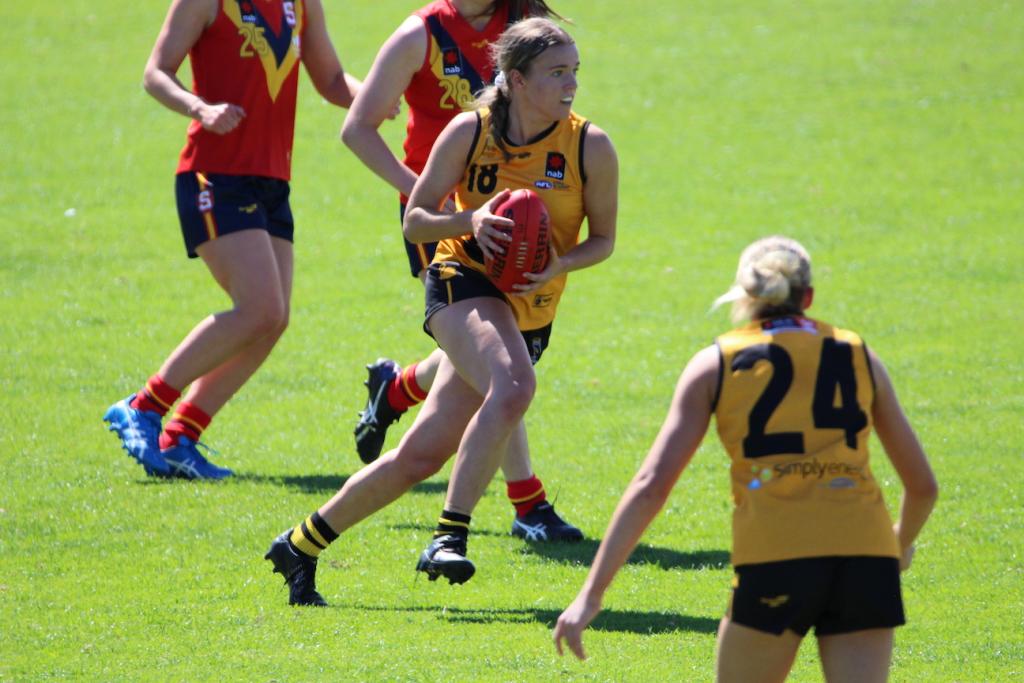 DANA East is not your typical state representative at the 2021 AFL Women’s Under 19 Championships. The Swan Districts midfielder hails from Manjimup, more than 300km south of Perth. Having come from a basketball background, East only really took up the oblong ball sport two years ago, and rose through the state development pathway from local football to the national championships in the short space of time. It was only by chance that East even made the transition into Australian rules football.

“I only started two years ago and it was just through a family friend,” East said. “They were running their first juniors comp in Mandurah for women. “The night before the game, they called me up cause they were low on numbers and I just said ‘yeah I’ll just do it and I just fell in love with the sport from then because I was full basketball until that moment really, and from then on I just continued my football career from then.”

One of the huge breakthrough players in the 2021 West Australian Football League (WAFL) Women’s competition, East admitted it was pretty daunting stepping up from local level, but praised her support network and her teammates for enabling her to adapt to the senior level.

“It was pretty scary, I was really scared going into it, because I knew it was bigger bodies, faster pace and I didn’t know if I was really prepared but I had lots of coaches and support around me that prepared me and I really enjoyed it,” she said.

Possessing clean hands – which she said she is always building on – East is a natural contested ball winner who thrives on the inside, then bursts to the outside where she can go forward and hit the scoreboard. On more than a few occasions this year, East has been best on ground for the undefeated Swan Districts outfit, moving well in transition to be able to add a high impact to the game. Her favourite position is inside midfield, but she does enjoy going forward, and now she is looking to improve on some of her skills to match her contested ball-winning ability.

“I’ve been working on a lot of the contested work, just ground balls and marking and … clean hands basically,” she said. “I’m really trying to improve my opposite foot kicking, and just when you get the contested ball or something just to execute and hit a target.”

It is no surprise to see Fremantle tackling machine Kiara Bowers, and one of the rising stars of the competition in West Coast’s Mikayla Bowen as two of her greatest inspirations she looks up to at AFL Women’s level.

Swan Districts coach Adam Dancey said East’s growth at the club was noticeable, and he had enjoyed seeing her progress up to the point where she is a state representative and in the frame to be drafted.

“She’s adapted to the game really well,” he said said. “She loves running straight lines, she’s a competitive beast, loves multiple efforts. “She loves the opportunity to get up in front of goal and put some pressure on in the forward line. “She relishes the contest, just loves to be in the contest.”

While East has been highlighted as one of the draft contenders after a sensational year, the Swan Districts talent is just focused on the here and now, and what she can control – ongoing improvement – and then let everything else take care of itself.

“(I want to) just to get the best out of myself and really improve on the skills that I’m trying to work on now, and obviously in the long-run try and get drafted,” East said.