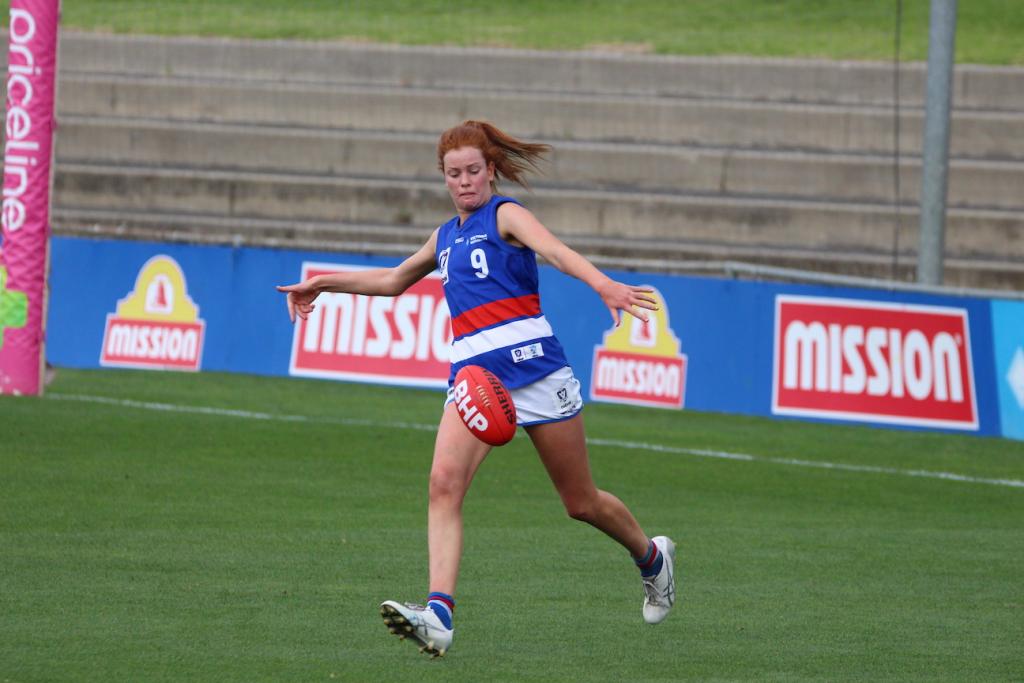 ROUND 10 of the 2021 Victorian Football League (VFL) Women’s competition saw three sides claim wins by over nine goals, as the top six continues to solidify. Outside challengers are lingering though, headlined by the Western Bulldogs who beat Carlton to remain within striking distance of those all-important finals places. All six fixtures were played out on Saturday this past round, making for an intriguing set of results as the state league action begins to heat up. With senior-listed guns and NAB League talents continuing to filter through, things are building nicely with four rounds left to play.

Hawthorn registered its second win in three weeks, dismantling the Darebin Falcons to the tune of 62 points at Box Hill City Oval on Saturday morning. The Hawks kept their opponents scoreless after the opening term and proved relentless in the second half, pouring on six goals from 10 scoring shots to run out comfortable winners, 10.9 (69) to 1.1 (7). The result sees Hawthorn sit two games outside of the top six, but with the best bottom-six percentage.

Kristy Stratton led a kettle of nine Hawks who found the goals, finishing with two in a best afield outing. The likes of Tamara Luke (24 disposals, 37 hitouts) and Alison Drennan (24 disposals, nine tackles) were also impactful in the win, while second gamer Grace McRae featured in her side’s votes having won 21 touches and laid nine tackles in brown and gold.

Hayley Munro was Darebin’s sole goalkicker on the day, as the ever-reliable Kath Roe topped her side’s disposal charts with 21 (17 kicks) in a gallant display. Victoria Blackwood‘s good form continued for the Falcons, as did that of Alyssa Mifsud. Meanwhile, Annalyse Lister showed no let-up in the heavy loss, laying a whopping 19 tackles for the Falcons as they dropped to 1-9 at the foot of the ladder.

The Western Bulldogs’ top six charge got back on track with a 14-point win over Carlton, in what was a high-stakes clash at Whitten Oval on Saturday afternoon. The Bulldogs constantly threatened to break clear in the low-scoring tussle, but their inaccuracy kept Carlton in the contest. Having led at every break, the home side managed to double its goal tally in term four to come away 4.14 (38) to 3.6 (24) winners, sitting just a game outside the top six.

The continued flow of AFLW talent into the state league again proved prominent, with first year Bulldog Jess Fitzgerald putting in a best afield performance from midfield. She topped her side’s disposal chart with 21 alongside Gemma Lagioia, while Eleanor Brown earned full votes from her coaches with 20 touches and eight marks. Second-gamer Stephanie Asciak also got a look-in for the votes, as the Western Jets product notched nine disposals.

Unsurprisingly, the midfield duo of Grace Egan and Abbie McKay played a crucial role for Carlton, as another senior-listed jet in Maddy Guerin led all comers with 32 disposals (28 kicks). Steph Lawrence finished as the game’s sole multiple goalkicker with two majors, while Natalie Plane could only manage two behinds from 13 touches in her first game at the level for 2021.

Geelong’s winning streak extended to six games on Saturday, as the Cats accounted for Essendon to the tune of 23 points at Deakin University. The deadlock of a goalless opening quarter was broken by a pair of majors to the hosts in the following period, with Essendon taking until term three to get on the board in a major way. Geelong maintained the scoreboard pressure though, boosting up to second spot with the 5.9 (39) to 2.4 (16) victory.

Sophie Van De Huevel was terrific in the hoops, booting two goals from 19 disposals, with Richelle Cranston finishing as the only other multiple goalkicker afield. Claudia Gunjaca gained full votes from the Geelong staff, as Renee Garing and Rebecca Webster led all comers with 23 disposals apiece. Garing also laid a game-high 13 tackles, while tall prospect Rene Caris led her side for hitouts with 16.

Essendon skipper Georgia Nanscawen continued her brilliant season and was the only Bomber to tick over 20 touches, with goalkicker Alana Barba among a trio of players to reach 15. Eloise Ashley-Cooper was also in that group alongside Gold Coast’s Lauren Ahrens, while Alex Morcom played an important role for her team in the loss.

Southern Saints remain a game clear in the top six, after knocking off Port Melbourne by 27 points on enemy territory in the upset of the round. The Saints stamped their authority early with a three-goal to nil opening quarter, before adding another three majors in the third term to set up an even five-goal lead at the final break. It proved a bridge too far for the Borough, who dropped just their second game, 8.7 (55) to 4.4 (28).

The efforts of Alexandra Hynes (eight disposals, 10 tackles, 17 hitouts) was recognised with full votes from her coaches, as the Saints proved their finals credentials. Meanwhile, Hannah Stuart and Alice Burke both notched over 20 disposals as expected, as Tara Bohanna booted a game-high two goals from her 18 touches, and Rebecca Neaves also got on the scoresheet. Hannah Priest played an important role, clunking five marks and laying six tackles to go with 17 disposals.

Emily Harley, one of Port’s four individual goalkickers, was named best afield for her side, while Hannah McLaren registered an equal game-high 21 disposals. Dandenong Stingrays pair Jaide Anthony (10 disposals, four marks) and Ash Richards (three disposals, one goal) also had their moments on debut, as Richmond-listed midfielder Maddy Brancatisano fared well in her first VFLW appearance for 2021, with 17 touches and four marks.

Collingwood’s unblemished run rolled on with a comprehensive 62-point drubbing of North Melbourne at Arden Street Oval, making it 10 wins in a row for the black and whites. Signs were ominous as the Magpies posted five goals to one in the first term, while taking advantage of the scoring end once again after half time as the Kangaroos failed to add to their total, making for the lopsided 10.15 (75) to 2.1 (13) final scoreline.

A trio of Magpies snared two goals each, in Sophie Alexander, Imogen Barnett, and Georgia Ricardo. Alexander could well have finished with a bag, having also registered three behinds. Mikala Cann managed a game-high 28 disposals, but it was Jennifer Guy (15 disposals, one goal) who was adjudged her side’s most valuable player in the big win.

Meagan Kiely had her usual say with a team-high 23 touches, as Molly Eastman was the only other ‘Roo to notch over 20 disposals. Tall recruit Alexia Hamilton made an impact with 13 disposals, 17 hitouts and one of her side’s two goals, while Airlie Runnalls and Nadia Moore also returned solid shifts as North fell to 3-7, with their hopes of making finals getting slimmer.

Casey became the first team to hold its opponent scoreless throughout an entire game in 2021, defeating Williamstown by 59 points on Saturday night at Downer Oval. Despite being buoyed by GWS-listed talent, the Seagulls were soundly beaten by a finals-bound outfit which poured on six goals from 11 scoring shots after half time. The Demons now sit pretty in fourth after the 9.5 (59) to 0 triumph.

Maddison Gay finished with a game-high three goals and Eden Zanker led all comers with 25 disposals for Casey, but it was Casey Sherriff (16 disposals, two goals) who claimed best afield honours in the win. Meg McDonald also hit the scoreboard from her 20 touches, as Gippsland Power talent Grace Matser got in the votes with seven disposals and 16 hitouts in her state league debut.

Lisa Steane had a team-high 18 disposals as she suited up for the Seagulls, also laying nine tackles. The likes of Elizabeth Keaney (17 disposals) and Georgia Garnett (14) also impressed in their maiden outings, while mainstays Ella Baxter and Aimee Whelan stood up in what was a tough outing for Williamstown.