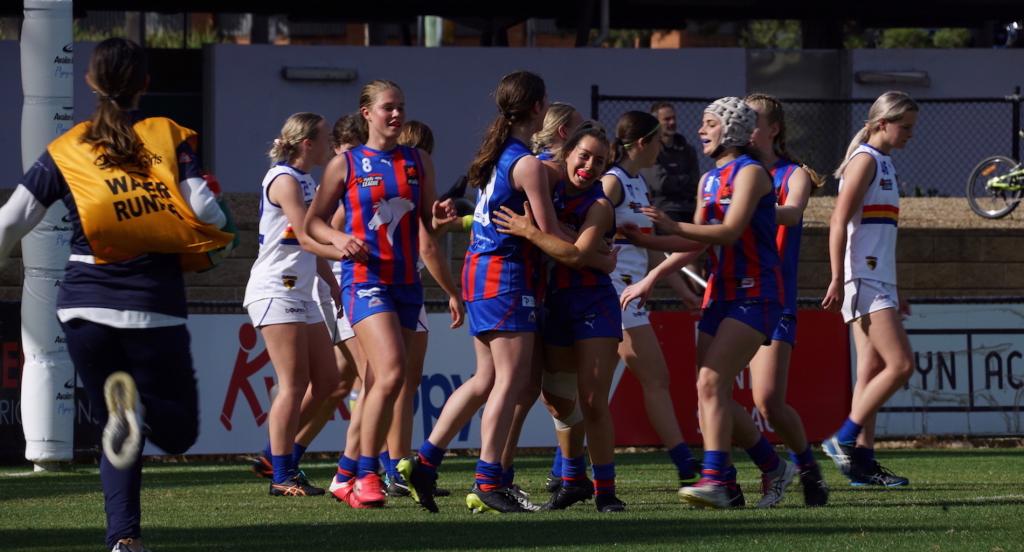 THE Oakleigh Chargers and Geelong Falcons progressed to the 2021 NAB League Girls grand final with respective wins in the weekend’s preliminary finals bouts. In a double-header at Avalon Airport Oval on Saturday, the Chargers lived up to their minor premier tag to advance in dominant fashion over Eastern, while the Falcons were impressive in their ability to hold off a plucky Greater Western Victoria (GWV) outfit. We recap both games from what was a super Saturday of elite talent pathways action.

Oakleigh Chargers became the first side to qualify for this year’s NAB League Girls grand final, via a convincing 31-point victory over Eastern Ranges. The minor premiers found themselves behind at the first break, but began to flex their muscle thereafter by keeping the Ranges goalless across three terms, while pouring on scoreboard pressure with 12 more scoring shots of their own. Ultimately, the 6.10 (46) to 1.9 (15) result only officially confirmed Oakleigh’s status as the top team in this year’s Metro pool, with eyes now on the top gong overall in next week’s decider.

Winning skipper Charlie Rowbottom lead her side superbly, rotating through the midfield from up forward to finish with 18 disposals, seven tackles, and three marks in a bullocking display. Fellow midfielder-forwards Eliza James (15 disposals, two goals) and Stella Reid (13 and two) were also impactful throughout Oakleigh’s charge, while second-gamer Jasmine Fleming topped her side’s disposal count with 22, including four inside 50s. Down back, Alexandra McCulloch and Erin Woodford were resolute, helping restrict the Ranges to just one major. Bottom-age jet Jemma Rigoni may be a bad luck story on the injury front, having ended the game on crutches.

Eastern was served well by a bunch of reliable figures, including Keeley Sherar in midfield. She found the ball 14 times but won it in important areas and looked to make each touch count. Mia Busch was kept busy in an under-siege defence, leading all comers with 24 disposals and seven marks in what was an exciting sighter for next year from the rebounding ace. Grace Walsh also played an important hand in a tough role down back, while the likes of Tilly Hardy (15 disposals) and Bridget Deed (18) worked hard, as did athletic ruck prospect, Georgia Campbell for 27 hitouts.

Oakleigh’s near-unblemished season rolls on to the big dance, with Geelong awaiting. The Falcons are the only side to beat the Chargers in 2021, so redemption may well prove a theme in Oakleigh’s effort. On the other hand, Eastern’s year comes to an end but the Ranges can be proud of a campaign where it seemed the squad extracted the best out of itself, finishing as the second-ranked Metro side.

Geelong Falcons held off a gallant GWV Rebels side on Saturday to earn top honours in the Country pool and advance to this year’s NAB League Girls grand final. The Falcons rode out tense moments and spurts of momentum belonging to the Rebels, making better of their own opportunities to come away 14-point victors. That theme was most evident during term three, where GWV looked like breaking back into the game, and potentially ahead, but could not quite overcome Geelong’s mix of class and solidity. A goalless final quarter saw the result finish 5.6 (36) to 3.4 (22) in favour of Geelong, with neither team losing any admirers for their efforts.

Falcons midfielder Tess Craven may well be the finals MVP at this point after another outstanding outing, leading all comers with 24 disposals and five marks, as well as three behinds. Aiding her in the engine room, Charlotte Simpson also ticked over 20 touches and Ash Van Loon got her hands dirty with 11 tackles in a typically strong display. Annie Lee (17 disposals, five marks) proved resolute as ever down back, as the forward combination of Renee Tierney (two goals) and Poppy Schaap (18 disposals, seven tackles, 1.2) caused plenty of headaches for the opposition.

GWV had an even spread of contributors, with leaders like Chloe Leonard (14 disposals, eight tackles) and Lilli Condon (12 and five) stepping up to the plate. Nyakoat Dojiok also ran through midfield and managed to kick a rare goal to give her side a momentary lift. Tahlia Meier proved dangerous forward of centre, as did dual goalkicker Paige Scott who got even busier once shifted to the forwardline. Down back, the presence of Molly Walton (13 kicks, six rebound 50s) was also important in helping repel some of Geelong’s attacks, while Kalani Scoullar commanded the ruck with 37 hitouts.

Geelong’s second grand final appearance in four seasons will pose a difficult task against Oakleigh, though the Falcons have already knocked off their future opponents in 2021. Having peaked at an ideal time, the Falcons are a good chance to go all the way. GWV’s incredible finals run comes to an end, having toppled Tasmania in week one and given the Falcons a red hot run in their final appearance.