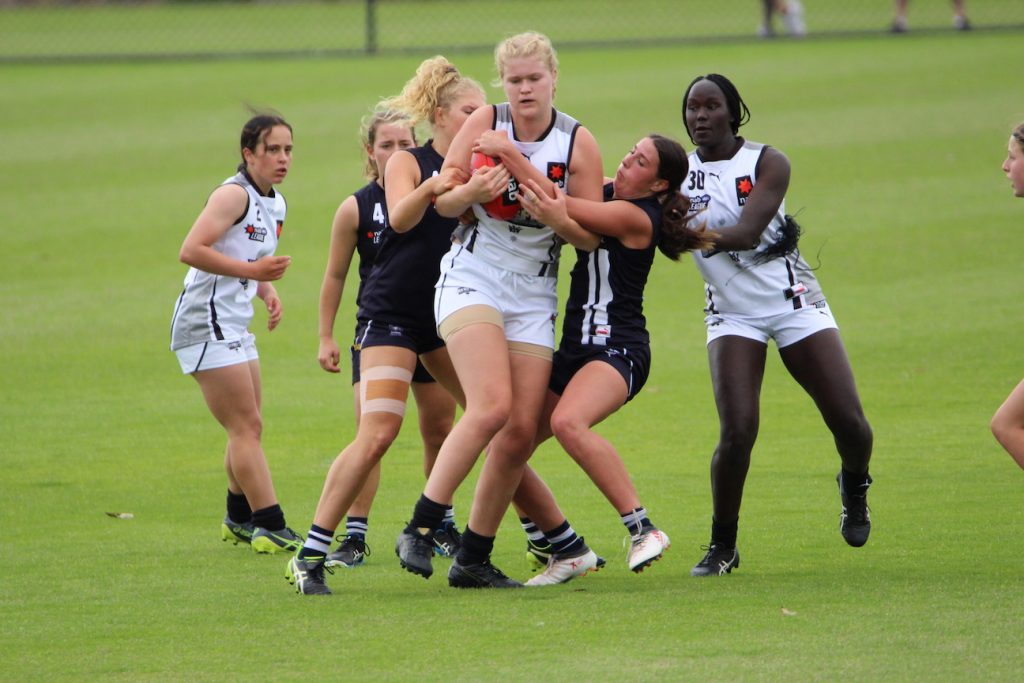 THE 2021 NAB League Girls premiership contenders have been whittled down to four after an enthralling opening week of finals, with the knockout bouts setting up this week’s preliminary final stage. As the postseason draw remains split into Country and Metro pools, Saturday’s double-header at Avalon Airport Oval will decide which regions are left standing to play off for ultimate glory.

In the day’s opening game, minor premier Oakleigh will look to flex its muscle against the Eastern Ranges, after both regions progressed through the elimination round in style. The Chargers remain the team to beat having dropped just one game this season, but Eastern cannot be counted out after knocking off the reigning premiers.

Looking at the Country equation, the third and fourth ranked regular season sides mixed it up last week to create an intriguing matchup this time around. The Geelong Falcons and Greater Western Victoria (GWV) Rebels are those teams in question, both with some terrific top-end talents to be showcased at midday.

We preview both fixtures with a look at form and the key matchups.

Top seed, Oakleigh Chargers will lock horns with Eastern Ranges to decide which side will represent the Metro regions in this year’s NAB League grand final. The Chargers have set the benchmark in 2021 having only lost once during the regular season, but have not yet been able to test themselves against the Ranges. Eastern finished as Metro’s second-ranked team with its 6-2 record, with either loss coming to fellow finals contenders. Both teams are on win streaks, with the Ranges riding high on four-straight victories, while Oakleigh returned from the break well to get up twice in the last fortnight.

Oakleigh’s squad dynamism will be a feature to watch in this clash, with many of their top-end talents able to shift and impact across multiple lines. Skipper Charlie Rowbottom is often at the heart of their cause, starting at full forward in recent weeks before bullocking her way into the game through midfield. Stella Reid is also among the starting forwards and has added a goalkicking string to her bow this season alongside Eliza James. Another in that midfield-forward rotation could be Amanda Ling, who is so tough and consistent at ground level. Further afield, ‘Chook’ Brooke Vickers and Charlotte Van Der Vlies run the wings, as Charlotte Taylor forms the centrepiece of a sturdy defence.

If there is one Metro region which can compete with Oakleigh for inside midfield strength, it may be Eastern. The one-two punch of Bridget Deed and Keeley Sherar has been wonderful to watch, with the likes of Jorja Livingstone benefitting on the outer. Isabelle Khoury has also entered the centre bounce mix, which is capped off by athletic ruck Georgia Campbell. Tilly Hardy and El Chaston, who have both gained VFLW experience this year, are forward threats, along with competition leading goalkicker Alyssia Pisano. The 15-year-old talent has proven she is not afraid of the big stage and can kick a bag if afforded too much leeway.

The minor premiers should rightly enter as the favoured side in this match, but will be given a good shake by Eastern’s competitiveness and even spread across the ground. It all starts with the midfield battle, which should prove a tight one, as both teams like to make an impact at the contest. Whichever side can get on top at the coalface and provide greater opportunities for the match-winners in the front half, will go a long way to being crowned this year’s top Metro region.

The Geelong Falcons and GWV Rebels battle it out at midday on Saturday to decide which team will not only be crowned the top Country region in 2021, but also progress to this year’s NAB League grand final. Both teams took out higher ranked opposition in last week’s elimination final round, with Geelong powering past Dandenong while the Rebels caused a momentous upset over top seed, Tasmania. The Falcons got the better of their weekend rivals all the way back in Round 1, winning by 10 points on home turf in what was a competitive hitout throughout. Plenty has change since then though, and there will be plenty of confidence bouncing around both squads given their recent exploits.

Geelong was pegged as one of the teams to beat during preseason and have not disappointed, boasting high-level talent on each line. Starting in defence, the Falcons are rock-solid with the likes of Annie Lee and Elizabeth Dowling among those who repel nicely across half-back, impacting aerially and with their disposal. Up the other end, Renee Tierney is the spearhead with dynamite athlete Gabbi Featherston ahead of her as another marking target. At ground level, Poppy Schaap has rolled forward a lot more in recent weeks and Zoe Garth is impartial to a goal. Delivering the ball to them often times is Tess Craven out of the middle, who will once again be supported by bottom-agers Charlotte Simpson and Ash Van Loon at the centre bounces.

GWV lays claim to a head of top end prospects, with arguably none more exciting that its two AFLW Academy members Ella Friend and Nyakoat Dojiok. The pair are capable of bookending this lineup with aerial dominance, but Friend is wonderfully versatile and could well end up waxing with Dojiok in defence. Last week’s match winner, Paige Scott is capable of tearing the game apart at any moment, named in midfield but likely to head forward where Tahlia Meier is also a threat. In the middle, Kalani Scoullar makes for an imposing ruck figure, while Lilli Condon is as hard-working as they come with her run and ball winning ability at ground level. Add the experience of Chloe Leonard to that midfield rotation, and GWV are ultra competitive.

If their Round 1 meeting is anything to go by, this clash should be an absolute belter. Geelong is a side which seems to be peaking at the right time, with their form built on a wall-like defence and reliable figures where it matters most, complemented by forwards who consistently convert. The Rebels have the potential to be equally as damaging on their day and will look to control possession, but should be tested well in their usually strong aerial department. This is a clash where you cannot rule either side out, and both should bring a true finals intensity to the fore.