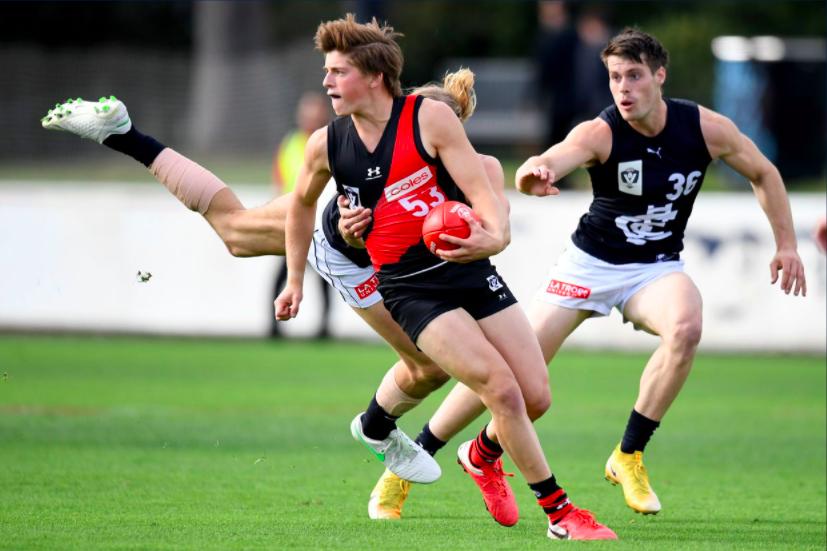 WITH the NAB League in the midst of a month-long break after three full rounds of action, some of Victoria’s most promising Under 19 talent has begun filtering into the Victorian Football League (VFL). A raft of top-age draft prospects have already made their state league debuts, with more to come, while members of all four Northern Academies also got some run in their legs. We take a look at how the prominent 19th-year players performed as they hit the senior football levels.

>> INSIGHT | Which 19-year-olds have improved their stocks?

Debuts have been synonymous with Collingwood of late, and the Magpies continued the theme by fielding another fresh face through the state league system. Mid-season draft fancy Ned Moyle came into the side and looked comfortable in his usual ruck post, winning 11 hitouts and taking four marks among his eight disposals. The 19-year-old Oakleigh product was joined by Chargers teammate Youseph Dib in the Magpies’ three-point win over Gold Coast. Dib, a Next Generation Academy (NGA) prospect, booted two goals as he played mostly forward of centre once again.

Leaning on their Academy stocks, the Suns also continue to blood a good amount of youngsters. Leading draft prospect Austin Harris returned after his AFL Academy commitments, notching eight disposals and four marks as he rotated further afield from the forwardline. Bigman Will Bella, the brother of Suns AFLW ruck Lauren, clunked seven marks and booted a goal, while Bodhi Uwland also took seven marks among his 12 touches. 2002-born players including Bailey Reeves, Jack Johnston, and Thomas Hofert also ran out for the Suns in their narrow loss.

The Western Bulldogs were too strong for a gallant Preston Bullants outfit on Saturday afternoon, as both sides gave berths to promising NAB League products. Cody Raak suited up for his second game in red, white, and blue, with the defender bringing his marking game to the fore. He took seven grabs and delivered nine of his 10 disposals by foot. Developing Calder Cannons tall Liam Podhajski was another to make his VFL debut in Round 3, battling against AFL-listed opposition for Preston to finish with four disposals and 10 hitouts.

A relatively young Brisbane outfit went down to Coburg on Sunday afternoon, with a raft of Academy graduates and members filling the squad at present. 18-year-old small Daniel Lanthois booted a goal in his maiden VFL appearance, as the youngest player afield. A bunch of 2002-born players also ran out for the Lions; Will Tasker had 19 disposals and five marks, Saxon Crozier and Toby Triffett both claimed 16 touches, while Tahj Abberley had it 14 times (11 kicks), Charlie Bowes kicked a couple of behinds, and Jack Briskey took three marks from 11 disposals in the defeat.

Essendon is another club which has turned to youth to good effect and despite going down to Carlton on Sunday, yielded good results from their NAB League talents. In their second outings, nippy Bendigo Pioneers pair Sam Conforti (23 disposals, one goal) and Jack Hickman (17 disposals, four marks) both impressed, working hard for their keep. Pios’ skipper Jack Evans made his debut in the sash and ended with five marks from 10 touches, while fellow debutant Billy Cootee (Western Jets) also found it 10 times and booted a goal.

Elsewhere, Sandringham Dragons co-captain Darby Hipwell enjoyed a second outing for the Zebras, despite their loss to Box Hill. He worked hard for 18 disposals and eight marks, which included a couple of nice moments. Greater Western Sydney (GWS) Academy standout Josh Green, the brother of Tom, again turned out for the Giants, ticking up to 17 disposals in his side’s win over Southport.