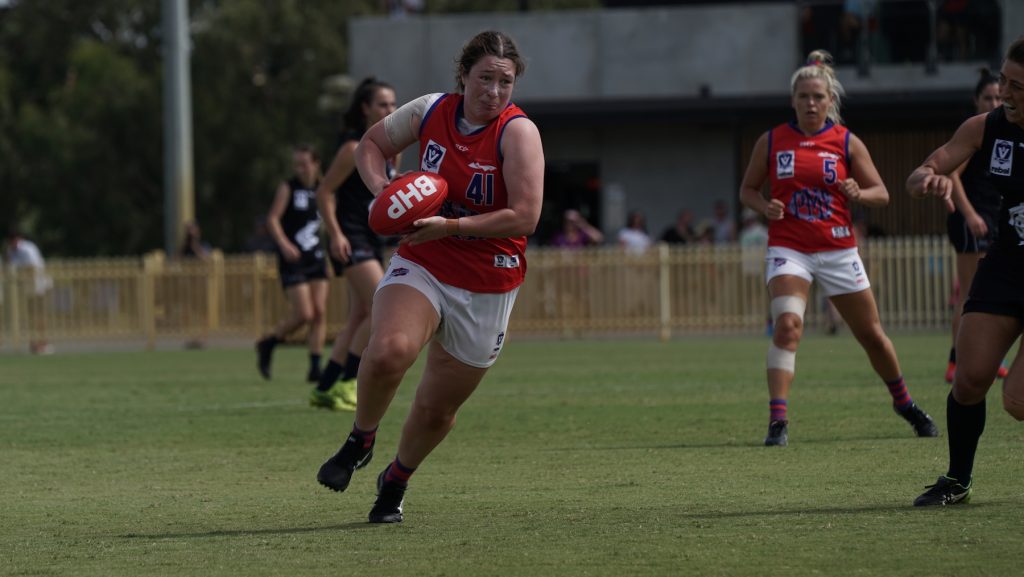 THE 2021 Victorian Football League (VFL) Women’s season rolled on into its ninth round over the weekend, with five of the six fixtures played on Saturday afternoon. There were a number of outstanding individual performances among the Round 9 action, as AFLW-listed talent and state league guns alike topped a range of key categories. We take a look at this week’s stat leaders, as well as the season tallies to this point.

It was no surprise to see Geelong ball magnet Laura Gardiner in the thick of things during her side’s thumping win over Western Bulldogs, with the first year midfielder gathering a round-high 27 disposals. In the same game, senior-listed Bulldog Sarah Hartwig got her hands dirty with 12 tackles, a feat matched by Collingwood’s Caitlin Bunker, while Danielle Marshall topped the kicking charts as 19 of her team-high 22 touches were delivered via foot.

Another couple of AFLW-listed talents opted to distribute by hand, helping form a trio of players to finish with highs of 13 handballs. Carlton’s Abbie McKay came in for her first state league game of the year and stood up in the Blues’ loss to Essendon, while Sarah Lampard got her hands on the ball for Casey and Aimee Whelan was busy as Williamstown went down heavily to Collingwood.

Spearheading the Magpies’ assault was Abbi Moloney, one of two key position forwards to snare four goals in Round 9. The young tall was matched by Port Melbourne’s Emily Harley, who has been delisted by Richmond during the AFLW off-season. Other talls to prosper included North Melbourne’s Vivien Saad, who clunked eight marks, as Seagulls ruck Elizabeth McGrath recorded a mammoth 58 hitouts.

In terms of the season leaderboard, VFLW-listed players unsurprisingly lead the way. The terrific individual seasons of Eliza West (Casey) and Meagan Kiely (North Melbourne) are reflected on the stats sheet, with both topping two categories. West leads the competition for disposals (average 22.6) and handballs (10.1), while Kiely has the most kicks (average 15.9) and marks (4.2). Another Demon in Imogen Milford remains the leading goalkicker with 15 after adding two on Saturday, and it is no surprise to see that Port’s Courteney Bromage is only one tackle shy of cracking the ton in 2021.

Find the full list of Round 9, and 2021 season stat leaders below.