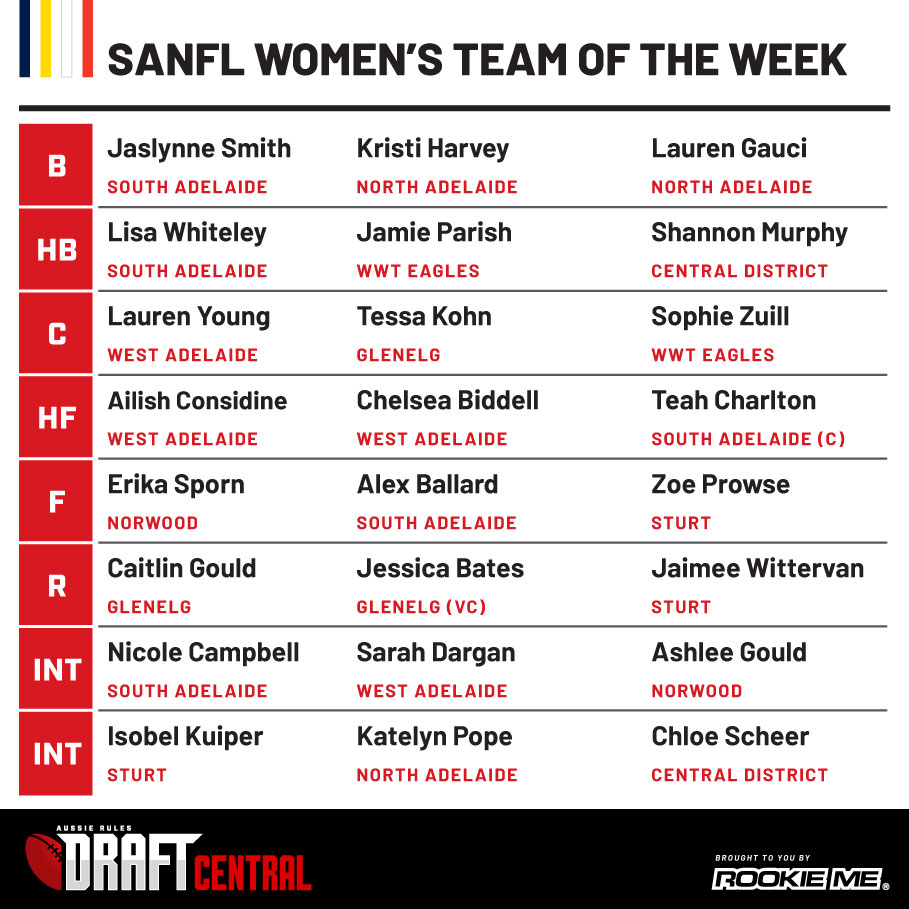 THREE of the four South Australian National Football League (SANFL) Women’s winners from Round 9 have a round-high four representatives in the Draft Central SANFL Women’s Team of the Week this week. South Adelaide, Sturt and West Adelaide all picked up wins, as well as a quartet of players in the Team of the Week, while the other winner Glenelg, as well as narrow losers North Adelaide had three players each. Norwood, Central District and Woodville-West Torrens managed the two players apiece this week.

This week’s captain is Teah Charlton, who returned to the SANFL Women’s with a bang in Round 9 as the standout player for the weekend. The South Adelaide young star is joined in the side by teammates, defenders Jaslynne Smith and Lisa Whiteley, as well as midfielder Nicole Campbell. They knocked off Norwood who had the two players in the team this week, with the top of the table side contributing Erika Sporn and Ashlee Gould.

Sturt’s big win over Woodville-West Torrens Eagles resulted in four players making it into the side, starting with Alex Ballard and Zoe Prowse inside 50 as some State Academy member representation, while Jaimee Wittervan (rover) and Isobel Kuiper (interchange) also made the 24-player squad. The Eagles had the two representatives, with Sophie Zuill and Jamie Parish both slotting into the team this round.

West Adelaide got the job done over Central District and managed the four players in the side for Round 9. Young gun Lauren Young made it in alongside AFL Women’s experienced talent in Crows, Ailish Considine and Chelsea Biddell, and Tiger, Sarah Dargan. The Bulldogs contributed the two players for this week, with Shannon Murphy named off half-back for her impressive seven rebounds holding up the front, while Chloe Scheer shone again and earned a place on the bench.

The final game saw Glenelg hold off North Adelaide with both sides having three players in the side this week. Glenelg’s Jessica Bates was named vice-captain of the hypothetical side, leading the way in a Bays’ based midfield which also featured ruck Caitlin Gould, and inside midfielder Tessa Kohn. The Roosters were again represented in defence by Kristi Harvey, named alongside Lauren Gauci, with Katelyn Pope up forward. The three emergencies for Round 9 were Norwood’s Najwa Allen, South Adelaide’s Tahlita Buethke and Woodville-West Torrens’ Anastasia Falkenberg.

DRAFT CENTRAL SANFL WOMEN’S TEAM OF THE WEEK: ROUND 9