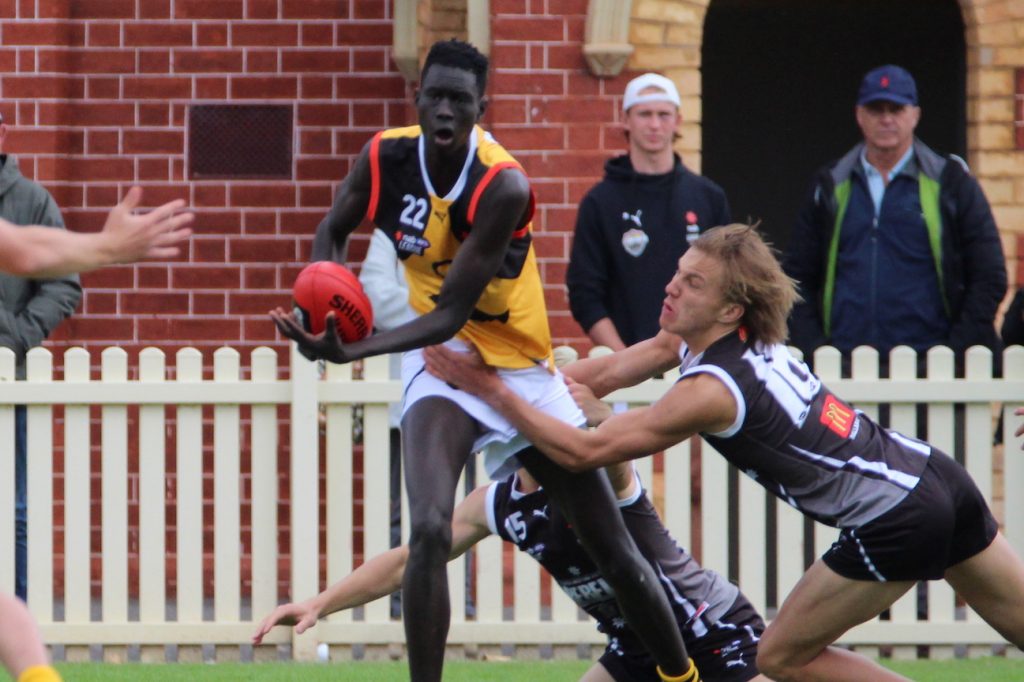 THE SHIFT in Next Generation Academy (NGA) related rules means clubs will only be able to match bids which come after pick 20 in this year’s draft, with the ‘first dibs’ concession set to be pushed back to pick 40 in 2022. Still, there will be a few clubs sweating on the form of their academy talents.

Headlining the list of NGA bolters is Dandenong Stingrays standout Mac Andrew (Melbourne), a raw and athletic tall whose NAB League form earned him a call up to the AFL Academy squad. Having already shown his wares across three games with the ‘Rays, the 18-year-old stamped his top 25 potential with an eye-catching final term performance in the ruck, as the Academy was thumped by Geelong VFL last Saturday.

While Andrews’ form will buoy Melbourne’s recruiting and list management staff, it may also throw a spanner in the works if other clubs take rightful notice of his upside. In a draft pool stocked well on midfielders, versatile talls like Andrew could accelerate up the order. The Dees also have access to Ryan Koo Kwet Kim and Kobi George from the Dandenong region, while Josiah Kyle is tied to St Kilda.

The Saints came into the year with one of the more promising NGA lists, but foster more long-term prospects at this stage. Jack Peris, the son of Olympic champion Nova, is beginning to show his true potential for Sandringham Dragons alongside teammates Angus McLennan, Marcus Windhager and Mitch Owens. Peris is an agile outside runner who snuck forward to kick a couple of goals against Dandenong in Round 3, after debuting in Round 1. Scott Beilby is another for St Kilda to monitor, a defender with good attacking traits.

Adelaide may lose out massively with the new rulings – if not this year, than certainly next. The Crows currently lay claim to North Adelaide small defender Blayne O’Loughlin, the nephew of Sydney great Michael, who also played in the AFL Academy game. He started the SANFL Under 18s season with averages of 35 disposals and seven inside 50s, captaining his side. He is arguably still safe of that top 20 range.

The Crows have seen Isaiah Dudley, who also boasts strong family ties to the top level, return with aplomb in 2021 for Central District, while Jacob Lochowiak earned a Reserves berth at Sturt. They will likely have one eye on next year’s crop though, as dynamic tall Isaac Keeler is coming through the ranks. He has already been billed as a first round talent and bagged five goals in Round 1 of this year’s SANFL Under 18s. If he maintains such form, Adelaide will inevitably miss out on him in 2022.

Fremantle is another team with a typically strong NGA program, having nurtured the likes of Joel Western and Brandon Walker to the top level as recently as last year. In 2021, Jesse Motlop is a name making waves. The son of Daniel, he is not eligible to be taken as a father-son by North Melbourne or Port Adelaide, but is another exciting talent for Dockers fans to look out for.

The crafty forward/midfielder has booted five goals in his three WAFL Colts outings thus far, with eyes on a League call-up as he continues to showcase his eye-catching work in the front half. Richard Bartlett is another on the radar, with Freo officially granted access to the East Fremantle talent this year, while South Fremantle’s Riley Colborne has good potential.

Speaking of potential, Collingwood will be able to snap up another NGA product coming through the Oakleigh Chargers’ pathway in Youseph Dib. Having graduated from Caulfield Grammar last year, the well-built small utility has made the step up to Collingwood’s VFL side amid the NAB League hiatus. He is another sitting outside that top 20 range, but has terrific traits.

Looking at others tied to clubs who have impressed via the NAB League, Cody Raak is arguably top of the list. He trained for a final spot in the Western Bulldogs’ squad over the off-season, and has really hit the ground running in 2021 having been overlooked. Northern Knights ruck Dominic Akuei has impressed with his athleticism and will have Carlton taking a closer look, while Blake Scott (Western Bulldogs) has shown glimpses along with Achoung Agog (Richmond).

Greater Western Sydney (GWS) fans have yet another academy product rising the ranks, with Josh Fahey proving his top 20 credentials of late. The was some conjecture surrounding his eligibility for the Giants after moving up to the Gold Coast last year, but having returned to the region in 2021 he will have enough years in the program to qualify, and be snapped up by GWS when a bid arrives. Gold Coast has classy small Austin Harris in its program, a little further down the order at this stage.

There should be a few father-son prospects in the top 20 mix too, headed by Nick Daicos. The son of Collingwood legend Peter is becoming hard to deny as the number one player in this year’s crop after scintillating performances for Oakleigh. Jase Burgoyne, the son of Peter and nephew of Shaun, played alongside Daicos in the AFL Academy showcase, while Daicos’ Oakleigh teammate Sam Darcy (son of Luke) is shooting up draft boards. He is a key position player with great versatility, upside, and aerial ability.

Elsewhere, Charlie McKay has proven his worth as an inside midfielder and hardened defender, and could be looked at by Carlton, while Ewan Macpherson (Western Bulldogs) and West Australian Taj Woewodin (Melbourne) may also garner some attention this year.