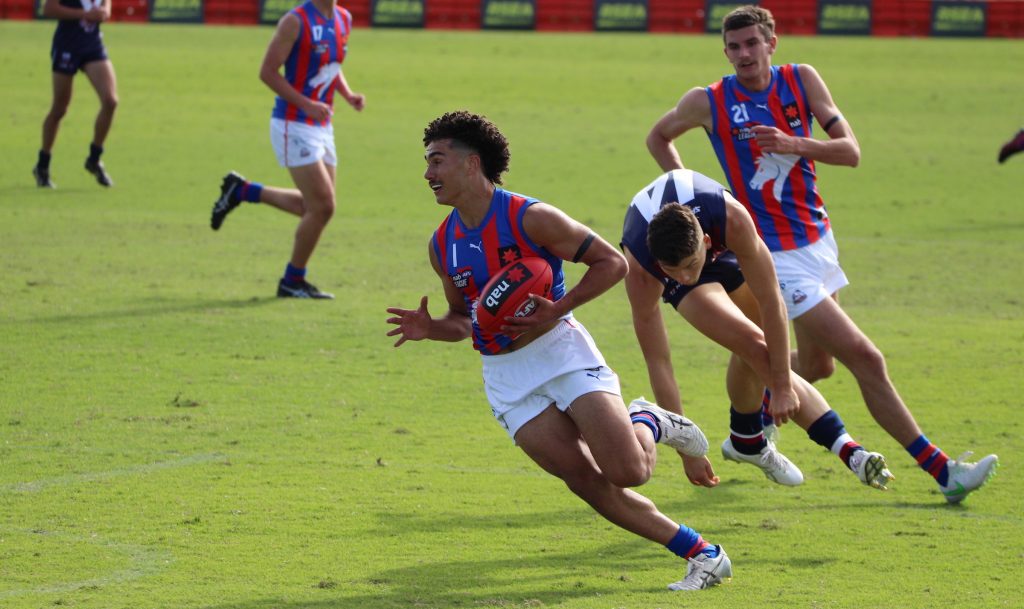 WITH the NAB League in the midst a month-long break after three full rounds of action, some of Victoria’s most promising Under 19 talent has begun to filter into the Victorian Football League (VFL). A raft of top-age draft prospects made their state league debuts in Round 2, while members of all four Northern Academies also took the field for their respective sides. We take a look at how the prominent 19th-year players performed as they hit senior level footballs.

>> INSIGHT | Which 19-year-olds have improved their stocks?

The Footscray Bulldogs unveiled Next Generation Academy (NGA) graduate, Cody Raak in their 72-point thumping of GWS on Thursday night. Raak contributed nine disposals and four marks in his maiden game, after making a stellar start to this year’s NAB League proceedings. The marking defender has worked on his weapons after narrowly missing out on a senior spot at the Bulldogs, averaging 27 disposals, six marks, and nine rebound 50s in three Under 19s outings.

Meanwhile, Giants Academy product, Josh Green (21 disposals, three marks) was named his side’s best player on Thursday. The brother of current GWS midfielder Tom, he trained with Richmond after also being overlooked at last year’s draft. The 18-year-old is a versatile tall who is working on his midfield craft, but can be a true utility.

The Brisbane Lions also fielded a bunch of Academy graduates, with six in the Under 19 category. Will Tasker impressed with 14 touches and two goals, as the likes of Saxon Crozier (12 disposals, four marks) and Toby Triffett (11 disposals, eight tackles) worked hard in the Lions’ 69-point loss to Carlton. Athletic bigman Jack Briskey, who vied for a Collingwood AFL spot in preseason, was also amongst the action with Tahj Abberley and Shatna Cashen-Harris.

Saturday’s game to watch for NAB League talent making the step-up was Essendon against Collingwood, which the Bombers won by 35 points at Victoria Park. The Bombers had current Bendigo Pioneers top-agers Jack Hickman and Sam Conforti make their debuts, with the latter named among his new side’s best players. Collingwood NGA Youseph Dib made the step up and laid eight tackles in the front half, while fellow Oakleigh players Will Hart and Dylan Thomas also made their debuts.

North Melbourne was another side to dip into the NAB League over the weekend, with a couple of Tasmania Devils talents coming into the side. Oliver Sanders (12 disposals, one goal) was among the Kangaroos’ votes as they went down to Frankston, while Tyler McGinnis (five disposals, four marks) also had a crack. For Sandringham, Dragons co-captain Darby Hipwell suited up for the Zebras and showed promise for his 13 touches.