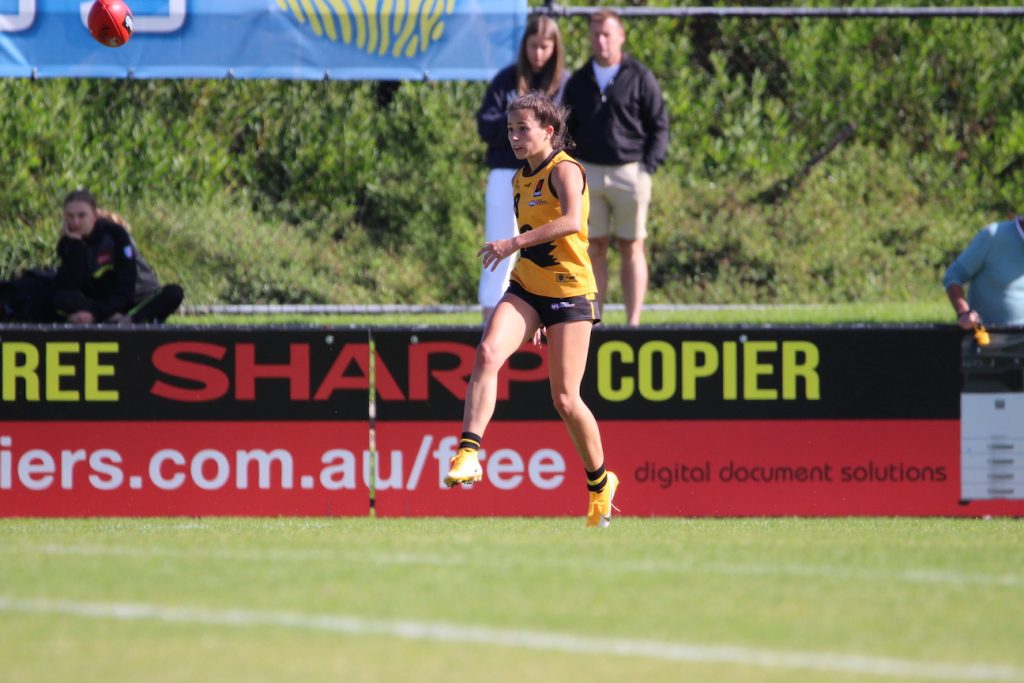 “Basically I pretty much played netball when I was younger,” Rowley said of her journey. “I kicked the footy with my dad and my brother all the time because he played footy and I always wanted to play footy so I went down to Mandurah Mustangs, the local club and ended up playing then next year went to Peel.”

Only 15-years-old at the time, Rowley was just excited about the prospect of playing against senior women, some of whom had already reached the elite level. Instead, the talented teenager announced herself on the big stage, coming away with a best and fairest as the youngest in the senior side.

“That was just crazy,” Rowley said. “They called my name up and I was like ‘what the hell? How?’ I was like 15 and I was like I don’t’ know, I was pretty proud of myself, but it was insane, I had no words.”

The outside midfielder admitted it was a clear step up when she moved from the local leagues to the WAFLW, but she quickly adapted to the tempo of the competition and said she would not have it any other way from now on.

“First game it was like the change of pace was the hard thing and I was like ‘woah this is so much quicker’ but playing against better players makes me play better so I love it,” Rowley said. “The competition, everything, if I went back I don’t feel like I’d be able to play as good because I play better against better people.”

When asked about her favourite position, Rowley said she had become used to the wing – having also played on either flank – but a new lease on life playing inside midfield gave her a new perspective on where she might like to play in the future.

“I don’t know hey? I don’t mind,” she said. “I’ve been trained to be playing on the wing, but for this state carnival I’ve been going inside mid and I like it so much better, winning my own ball. But either or.”

The modest talent described her strengths as her speed and marking, though if you talk to anyone out west, her composure with ball-in-hand, ability to find space and hit targets, and her run-and-carry are all areas where she excels. But like any aspiring AFL Women’s talents, Rowley said she had plenty of areas she wanted to improve on going forward.

“I’d say I’m fit but I just want to be fitter, like working on that over the off-season and then probably my opposite foot kicking,” she said. “I want to be able to kick on both feet. I can do it standing still, but I need to be able to do it in a game I reckon.”

In the preseason, coach Steve Markham said he would like to have “four or five” Rowley’s.

“She can play all over the ground, but I love her on the outside because she runs and spreads and delivers inside 50,” Markham told Draft Central. “We’ve used her a little bit last year forward when she copped an injury and she was able to hit the scoreboard.” So at points we’ll drift her forward and she’s done some impressive things inside 50, so we’ll throw her around a little bit this year and just see what suits us best on the day.”

Speaking of Markham, Rowley had plenty of praise for the coach that took her side from wooden spooners to premiers within a season, describing the feeling from going bottom to top as “insane”.

“It was so good,” Rowley said. “Because that year we had so much hope when became wooden spooners, we were like ‘we can do it’ but then we got the new coach and he was just drilling confidence into us and ‘you can do it, I can feel it, you just need to believe in yourselves’ and we just took that belief into the season and then won the premiership.”

Rowley said Markham was her first coach at the Thunder – having led the Rogers Cup girls to the same success – and was the main influence on her football journey. As for an AFL Women’s leader to look up to, a recently crowned league best and fairest was a standout choice for the teenager.

“It’s hard because there’s so many,” Rowley said. “I do love Kiara Bowers from Freo, everyone does, that’s a bit typical, but just the way she goes about it, she’s so good. “Even Georgia Patrikios from St Kilda, her run and carry and everything like that.”

A member of the AFL Women’s Academy, Rowley said the trip with the nation’s most talented prospects to the Top End was “sick” and something she would never forget.

“When I went to Darwin, I learnt so much about professionalism and it made me want to make it to the top level so much more,” Rowley said. “Just about what you learn.”

Now edging closer towards achieving her dream of being picked to play at the top level, Rowley said she had no intention of slowing down. While playing AFL Women’s was the “obvious” goal, she did not want to just make it, but continue to improve her game in any way she could.

“Well obviously the main one is to make AFLW, but just be the best player I can and keep improving better every week,” she said. ‘I don’t want to just get there and stop, just want to keep getting better.”