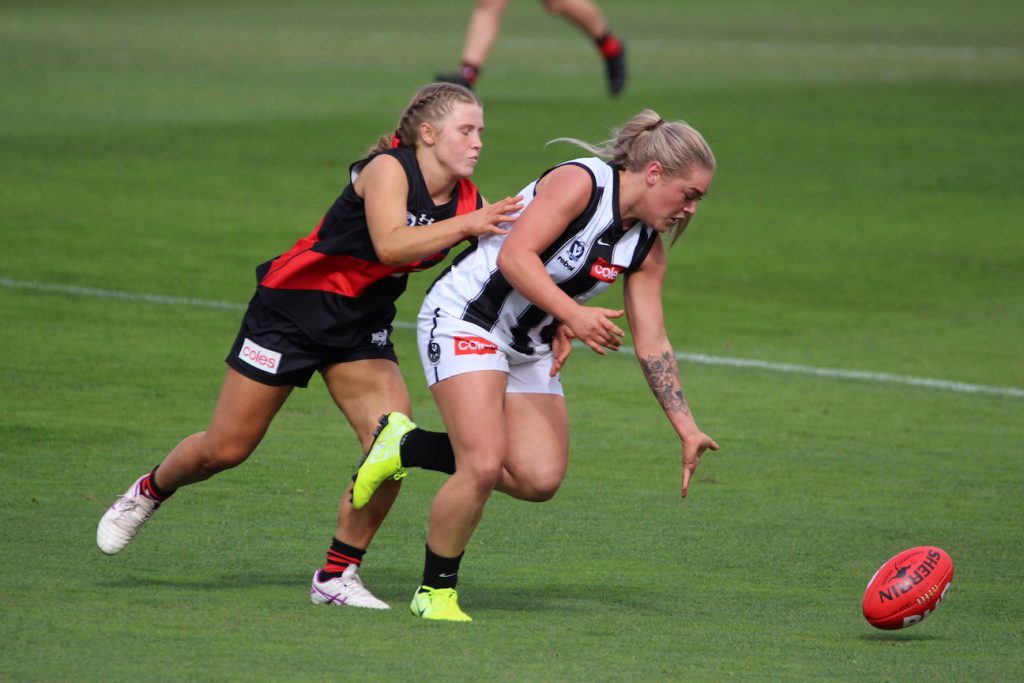 A HEAP of young prospects are now filtering through the Victorian Football League (VFL) Women’s competition, with the revamped structure allowing Under 18 and 19 NAB League players to align with state league sides as both seasons run concurrently. Despite the NAB League’s resumption, Round 8 saw plenty of young talent scattered across each state league side. We take a look at how VFLW-listed players who currently compete in or have recently graduated from the NAB League, performed.

The Western Bulldogs are turning their season around, having notched a third win after defeating the Southern Saints by 18 points on Friday night. Brooke Hards (10 disposals, four tackles), who has played every game for the Dogs this season, was one of their best and only graduates afield in her relatively new defensive role. Molly Denahy-Maloney was the other in this category, notching four touches and six hitouts.

The Saints had some promising young talent scattered across their side too, headlined by the debut of Dandenong Stingrays defender Jemma Radford. She earned votes in the loss for her 12 disposals and six marks, getting better as the game wore on. Tall Amelia Peck was another to impress with 18 touches and four marks, while Grace Hodder had it 16 times and laid five tackles.

Casey brought Port Melbourne’s unbeaten run to an end on Saturday, trumping the Borough by 41 points on the road. Forward Sophie Locke made her return and fared well with 10 disposals, but could not quite find the goals. Recently delisted Richmond forward Emily Harley also found it 10 times, as Bridie Kennedy and Kate Adams also got a run for Port. Emma Horne (seven disposals) and Bridie Winbanks (six hitouts) were Casey’s representatives in these parameters.

Geelong’s top four surge roared on with a thumping win over Darebin Falcons, seeing the Cats move to an impressive 6-2 record. Paige Sheppard was among the votes for Geelong, finishing with 18 disposals and five marks as her terrific return season continues. Tamara Smith also found a good amount of ball, working hard for 20 touches and nine tackles in the famous hoops.

On Sunday, Collingwood got the points in a traditional Anzac Day matchup with Essendon, as the Magpies continue to set the competition benchmark. Olivia Meagher started well in black and white, and finished eight disposals. Essendon continues to blood a good amount of youth, with Elizabeth Snell (14 disposals, five tackles) and Eloise Ashley-Cooper (17 disposals, five tackles) both terrific, while Calder products Grace Dicker (12 and seven) and Alana Barba (11 and three) were others who proved productive.

Hawthorn picked up its second set of points on the weekend after downing Williamstown by 16 points, meaning the Hawks’ two wins have come against fellow standalone entities. Jenna Richardson got among the votes in her side’s victory, while it was no surprise to see Ruby Tripodi again do the same for Williamstown. In North Melbourne’s thumping win over Carlton, Ciara Fitzgerald took three marks in her 12 disposals, as Marnie Jarvis and Taylah Kolevski found touch in the Blues’ loss.