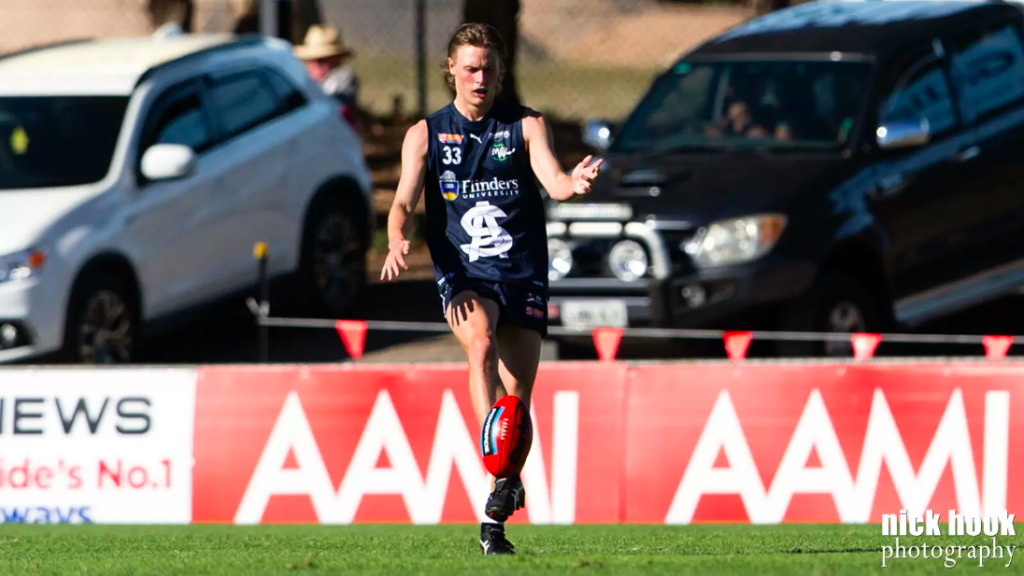 SOUTH Adelaide’s Arlo Draper is a prospect who has garnered a fair bit of intrigue this year. The dynamic midfielder-forward is rated highly by most keen draft watchers, but proved a glaring omission from the AFL Academy squad which was recently dismantled by Geelong VFL. While 24 of the nation’s best and brightest talents looked to prove their worth in that game, Draper continued with his SANFL Under 18s commitments, helping the Panthers edge home against Central District by three points on Saturday morning.

In four games this season, the 18-year-old picked up where he left off in 2020 with some impactful performances for South. Draper has notched over 20 disposals and booted two goals in three of his outings thus far, showcasing the damage he can do when rotating forward from midfield. His versatility, and turn of speed to create space in tight areas are key pillars of his game, as well as a handy knack for taking overhead marks and hitting the scoreboard.

Draper is the prospect under our SANFL Player Focus microscope this week; we run you through his game quarter-by-quarter, and bring you the key stats out of his Round 4 showing.

Stationed at the opening centre bounce, Draper started brightly as one of South’s midfield staples. He showcased his usual poise in traffic to flick out clean handballs and work his way into better positions with good agility. He also set up a kick behind the play when the Panthers were inside attacking 50, where he would be able to read the play and act as his side’s wall. At the centre bounces and stoppages, he set up unmanned in the anchor role and tracked the ball well, even when those movements went unrewarded in the way of possessions. Defensively, he seemed to conserve energy a touch and could be seen walking or jogging between contests, not spreading as hard as others. Given he mostly remained between the arcs when the ball was in either 50-metre zone, that may have been a product of instruction or positioning. Draper rotated into attack at around the 14-minute mark, where he popped up to clunk a terrific overhead mark and convert South’s second goal of the day. It proved a rare kick among his many effective handballs and clean gathers in term one.

Starting once again as the unmanned anchor, Draper made another eye-catching start to the quarter – this time by running straight through the opening centre bounce to mop up the spillage and boot a clearance inside 50 to give Bailey Pilmore an immediate chance on goal. He again lacked a touch of intent going the other way at stoppages when Centrals prized first possession, while also allowing his direct opponent to take front position at the contest. But as he did during the opening period of play, Draper impacted once he swung forward with a nice grab deep inside 50. The kick was weighted to his advantage, he read it well to stretch and clunk the mark before converting once again. It proved an important goal, restoring South’s buffer to seven points. Having moved back into midfield, Draper showed his burst in patches and was able to get into positions to receive and deliver forward by foot.

The third term was arguably Draper’s quietest on face value, despite taking up many of the same positions and roles. He was given the usual centre bounce and stoppage orders while in midfield, before rotating forward at the 14-minute mark but not adding a goal to his tally. Draper tended to sag off and wait to receive on the outer at stoppages, rather than being sucked in or extracting the ball himself, which worked out well for him in the second term. He did not see as much of the ball this time around, but followed the flow of the play and was able to deliver some more clean disposals around the ground.

Having faded a touch, Draper ensured he would make an impact when it mattered with an improved final term. He now found himself manned at the stoppages in that position behind the ruck, still giving up front position but staying with the play to earn an early centre clearance. With a spark needed for South as Centrals closed, Draper looked to better utilise his turn of speed and burn opponents on the outer, while also providing a couple of tackling efforts. As he had done in the first half, Draper made his move into attack count with yet another overhead mark close to goal, using his athleticism and smarts to pluck the ball from the back and then put through his third goal. While he was uncharacteristically fumbly over the ball in the latter stages, that goal provided the Panthers with some breathing space at a clutch moment. He really proved a difference maker with those efforts up forward, ensuring the move was less of a rest and more of a weapon for South.

Having missed out on representative honours many had pegged him for, Draper served a reminder of his class and unique talent. His ability to rotate forward and consistently hit the scoreboard is a threat any team would love to have in its back pocket, and three goals in those four short forward stints proved crucial in Saturday’s result. While he exceeded his goal to notch a yo-yo test score of 21 during preseason testing, Draper could arguably utilise that running capacity better on the spread and in defensive aspects, ensuring his speed-endurance mix really comes to the fore. At stoppages, wrestling to front position could see him win more contested ball, though Draper’s tendency to sag off and receive second possession in this game allowed for his class and cleanliness to shine through. Going forward, Draper is also looking to sharpen his opposite foot kicking and put on size to play more permanently through midfield. He certainly has the tools to star in that position, with an innate ability to manufacture time and space, and the all-important versatility to also impact up forward.