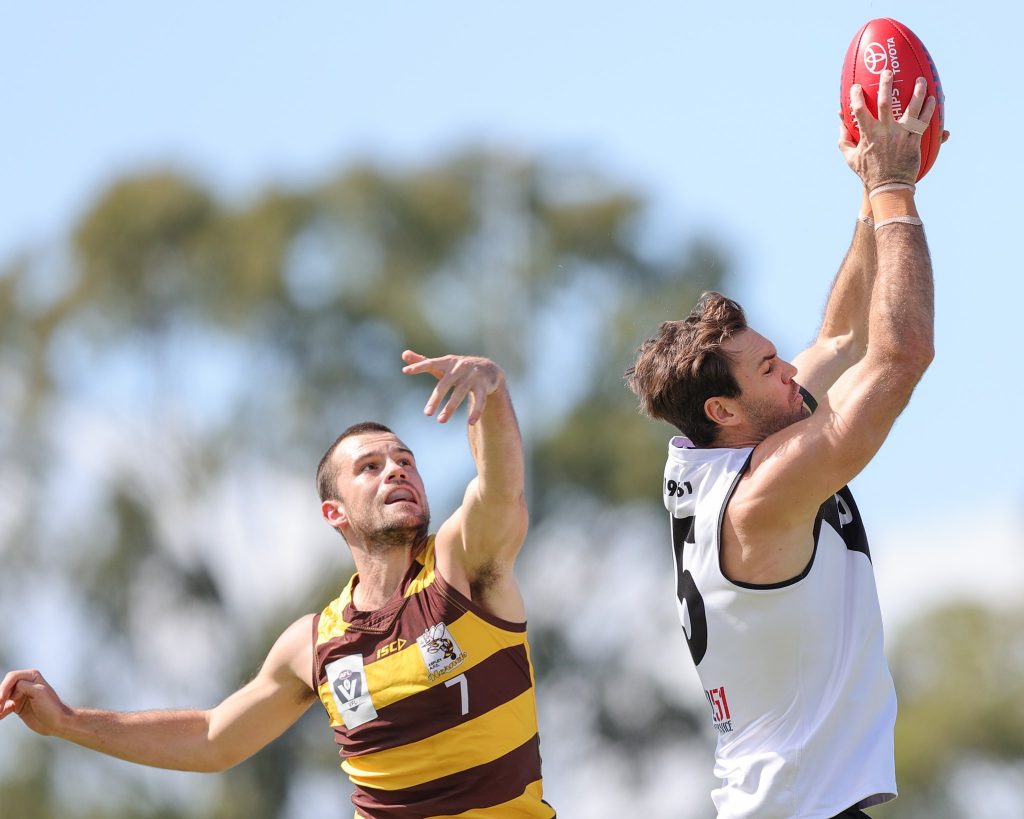 SOUTHPORT Sharks have overcome inaccuracy to post a 14-point victory over Aspley Hornets in the battle of the Queensland standalone teams at Fankhauser Reserve. Both sides won their respective Round 1 Victorian Football League (VFL) matches, so were coming in with good form. Despite having 19 more scoring shots throughout the match, the Sharks were only able to just get across the line, 14.25 (109) to 15.5 (95) as the visitors never stopped pushing the home team.

The match started with Aspley’s Matt Hammelmann on absolute fire. He booted two goals in the first six minutes, then converted a third midway through the term, for the Hornets to lead 3.1 (19) to 1.3 (9), as Jesse Joyce was the sole goalkicker for the home side. After a couple of other misses late in the term – Billy Gowers being the main suspect with three behinds – back-to-back goals to Round 1 hero Lukas Webb, as well as Ryan Gilmore, handed the Sharks a five-point lead at the first break.

The Sharks dominated the second quarter from the get-go as Brayden Crossley, and Gilmore contributed to a couple of behinds before Crossley bagged his first major, and Gowers got his first from his fourth scoring shot. By the midway mark of the second term, the Sharks were out to a 22-point lead, but already missed chances were keeping the Hornets in the game. Against the flow of play, Ben Warren and Ryan Banks-Smith slotted majors for the Hornets, and it was clear the visitors were going to capitalise on their chances.

In the final 15 minutes of the term, a flurry of action saw the Sharks extend their lead a little more, despite three straight behinds in the final couple of minutes. Crossley and Gowers both booted their second goals prior to that, with Thomas Baulch snagging one back for the visitors. At the main break, the Sharks had 22 scoring shots to nine, but only one more goal for an 18-point lead.

Desperate to capitalise on forward half possession, the Sharks had a goal in the opening three minutes going to Michael Manteit, which was countered by Ryan Bastinac of the Hornets. Three more minor scores down the Sharks’ end – including a couple of rushed behinds – were worrying, but Rhys King and Gowers ensured they did get some bang for their buck. They needed someone to try and contain Hammelmann however, as the ex-Brisbane forward was dominating with another three goals – taking his match total to five by the final break. For all the back-and-forth, the margin was once again 18 points at the last change.

The home fans really started to get nervous in the final term despite kicking the first two goals of the quarter through Gowers and Nutting to stretch the lead out to 30 points. Just when they looked to run away with it, the Hornets kicked five of the next six goals – including Cody Stackelberg matching Hammelmann’s three consecutive majors – which cut the deficit to within a kick. With seven minutes on the clock, the game was well and truly alive. Luckily for the Sharks, King came to the rescue to kick a steadier, and from there the home team held on for the victory, 14.25 (109) to 15.5 (95).

Gowers finished with a massive 5.5 from 17 disposals and six marks, leading the way for the winners, as Crossley and King both booted two goals, while Webb (25 touches), Joyce (23) and Manteit (20) all found plenty of the ball and each snagged a major. Jacob Dawson feasted around the ground on his way to 34 disposals, while Fraser Thurlow had 29 hitouts from 19 touches. Despite playing in a losing side, Hammelmann snagged six goals from 11 touches and seven marks, with Stackelberg’s three coming from 14 disposals and four marks. Baulch (25 disposals, two goals), Jack Rolls (22 and one) and Bastinac (19 and one) all worked hard to also hit the scoreboard, as ex-AFL talents Jacob Allison (30 disposals) and Corey Lyons (26) led the disposals.

It was a mixed back of results for the other Queensland sides, with Gold Coast Suns claiming a 14-point win over Sydney Swans, whilst the Brisbane Lions suffered a heavy 69-point loss to Carlton. Dylan Stephens (32 disposals, seven marks and five tackles), Sam Gray (31 disposals, six marks and five tackles) and Ryan Clarke (30 disposals, eight marks) all put their hand up for a Swans recall, whilst youngster Sam Thorne slotted three goals, as did Joel Amartey. For the Suns, Will Bella slotted three goals form 10 touches and five marks to be a standout Academy prospect, with Malcolm Rosas (18 disposals, two goals) and Will Brodie (31 disposals, two goals) among the top AFL-listed players. For the Lions, Tom Fullarton had a day out with 34 touches and 18 hitouts through the ruck, while Rhys Mathieson kicked four goals from 18 disposals in a half. The Blues had an even set of contributors led by Will Setterfield (25 disposals, seven marks and 10 tackles) and Paddy Dow (20 disposals, six tackles) through the midfield, whilst Ben Crocker and James Parsons combined for a whopping 12 goals in the win.

Western Bulldogs handed GWS GIANTS their second loss of the season, as last year’s number one draft pick, Jamarra Ugle-Hagan slotted five goalswer to be amongst six multiple goalkickers for the Dogs in the huge 21.9 (135) to 10.3 (63) victory. Mitch Hannan (three goals), Rhylee West (three and 25 touches, seven marks and five tackles) and Louis Butler (two and 20 touches, six marks and three tackles) were all huge, while teenager Dominic Bedendo (nine disposals, five marks and two goals) also looked dangerous for the Dogs. Jesse Hogan continued his good return to form with four goals from 14 touches and 11 marks for the Giants, while Will Shaw (two goals) and James Peatling (23 disposals, six marks) and Josh Green (21 disposals, three marks and four tackles) were among the top ball-winners.

In other results, Frankston Dolphins dominated North Melbourne on their way to another win, getting up 16.8 (104) to 5.9 (39). Tyler Roos and Nathan Freeman shared in a lazy 85 disposals and 20 marks between them for opposite sides through the midfield, while Bailey Lambert (five goals), Jack Mentha (three) and Will Fordham (24 disposals, two goals) were also damaging on the scoreboard for the Dolphins. Will Walker (23 disposals, 11 marks) Harry Jones (21 disposals, eight marks) and Flynn Appleby (20 disposals, 11 marks) supported Roos in the heavy loss. Another standalone side Northern Bullants was not as fortunate against Hawthorn at Box Hill City Oval, with the visitors going down by 56 points after being level at quarter time. Emerson Jeka slotted five goals from 20 disposals and nine marks in a dominant display up forward, while Fergus Greene (14 disposals, three goals) and Keegan Brooksby (13 disposals, 24 hitouts and two goals) were also good. Ned Reeves had a casual 54 hitouts to go with 16 touches and a goal as well. for the Bullants, Tynan Smith kicked three majors from 16 touches, as Tom Wilson (26 disposals, 10 marks) and Paul Ahern (23 disposals, one goal) were among the best.