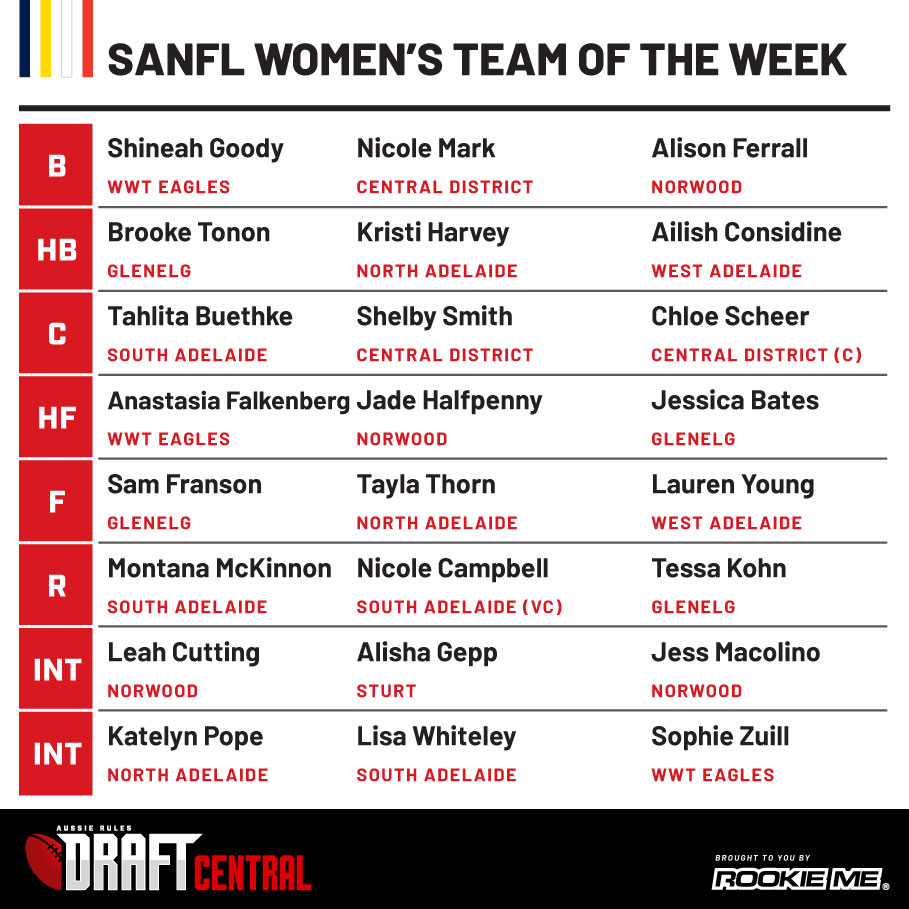 NORWOOD and Glenelg lead the South Australian National Football League (SANFL) Women’s competition and for Round 8, the Draft Central SANFL Women’s Team of the Week nominations. Both Round 8 winners recorded the four players as did South Adelaide, whilst other victors in Central District and North Adelaide had the three players this week. Woodville-West Torrens Eagles went down in their matches but still managed the three players, while West Adelaide (two) and Sturt (one) rounded out the side.

Top-of-the-table Norwood have their representatives in each third of the ground. Alison Ferrall has made it into a back pocket, with Jade Halfpenny at centre half-forward. Whilst Halfpenny did play midfield, the squeeze of the midfield group this week meant some extra height was needed inside forward 50, so in the hypothetical team, she moved there. Ruck, Leah Cutting and midfielder, Jess Macolino were named on the bench. Speaking of extra height in the forward line, West Adelaide’s Lauren Young has been named down there due to the squeeze, but can rest in a forward pocket, and is joined in the side by teammate Ailish Considine.

Glenelg’s four representatives begin with Tessa Kohn onball, while Brooke Tonon slots into half-back and Sam Franson in a forward pocket, while Jess Bates is slightly higher at half-forward. The team they beat – South Adelaide – still had four players in the side, led by this week’s vice-captain of our team in Nicole Campbell, while Tahlita Buethke had her best game of the season and earned a spot in the team, alongside regular, Montana McKinnon in the ruck. Lisa Whiteley also made the 24-player squad on the interchange.

Central District’s successful one-point win over Sturt saw Chloe Scheer nab a best on ground, and she has also been named captain in our Team of the Week. She is joined in the side by her captain Shelby Smith, and defender Nicole Mark. For Sturt, they had just the one player, which was not indicative of their effort, but more an even spread, with Alisha Gepp making it onto the bench.

The final teams to make it were North Adelaide and Woodville-West Torrens Eagles who both had three representatives. For the Roosters, Kristi Harvey returned to the team after a rare week out of the side, while Tayla Thorn is bookended in full-forward, and Katelyn Pope on the bench. The Eagles have Shineah Goody in defence, with Anastasia Falkenberg at half-forward and Sophie Zuill on the bench.

In terms of the three most unlucky to miss, this week’s emergencies are Sturt’s Elise Dawes, Glenelg’s Ellie Kellock and North Adelaide’s Amelie Borg who all had strong performances.

DRAFT CENTRAL SANFL WOMEN’S TEAM OF THE WEEK: ROUND 8