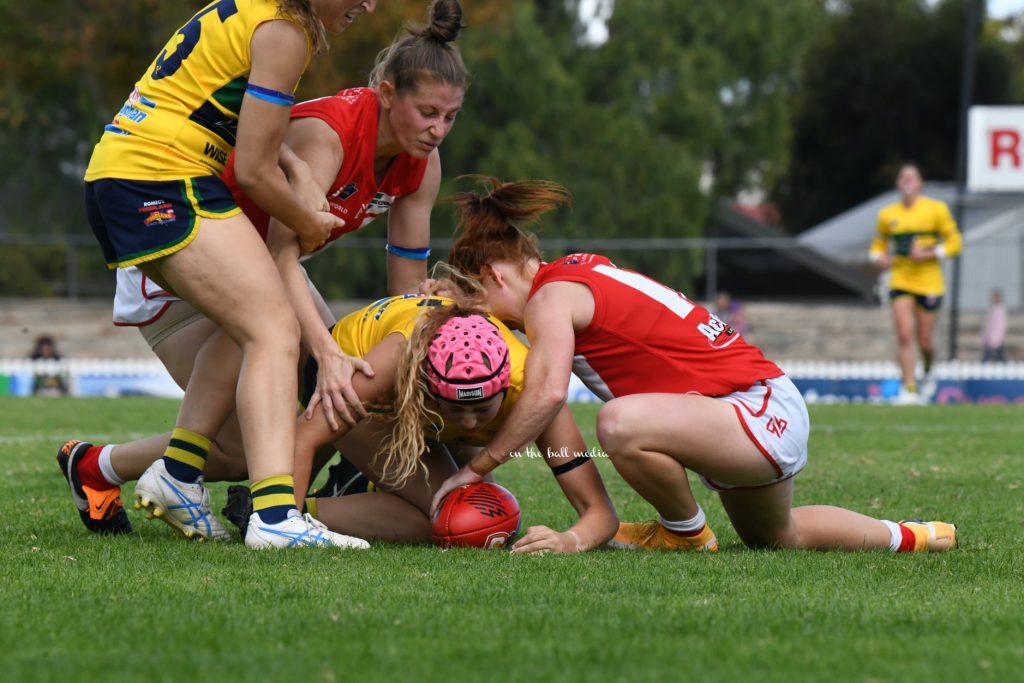 RETURNING to the South Australian National Football League (SANFL) Women’s competition, there were plenty of young guns back in action with South Australia’s AFL Women’s Under 19 Championships campaign done and dusted. We cast our eye over the players across the four games, with each note the individual opinion of the writer.

Spent plenty of time around the wing where she used her blistering pace to work into ball winning positions. Finishing with 13 disposals, Clark was constantly around the play, whether it was pushing hard to be the next option for her team or putting pressure on the opposition as they tried to extract the ball from defence. Was solid in her side’s win and will look to add to this performance moving forward.

Was stationed around half back for a lot of the day and was really attacking with her play. On multiple occasions she played on from a mark and created some run out of defence for her side, immediately putting Eagles defenders up the ground on the back foot. Did not get a heap of the ball with only five disposals but made each of them count with her damaging play.

Played deep in defence for plenty of the day, where she blanketed any opponent she was standing next to. This did not stop her from finding a bit of the ball herself, ending the match with 13 disposals in easily her best performance of the year, as she continues to add strengths to her game.

Found herself in the midfield for the majority of the contest, where her positioning stood out exceptionally well. Played a defensive type role as she acted as her team’s sweeper around the stoppages. She thwarted plenty North Adelaide clearances by stationing herself in crucial positions. Only had the seven touches, but her role was more than statistics, as she played an integral role in the Eagles’ engine room all day.

The talented utility spent time in various positions of the match, but mostly settling in the ruck and defence as the match progressed. Had an opportunity to snag a goal from a free kick in the first quarter, but the kick was wayward. Competed all day to make her way to 13 touches and two clearances, and once again demonstrated her ability to play in all three lines.

Returning from a long-term injury, Ballard was given the opportunity to ease back into with an extended stint sitting as a deep forward for West Adelaide, but once she blew the cobwebs out she worked into the game really well, getting more involved in the midfield and looking really dangerous as she hunted the ball, this hunt was vital in her goal in the 4th term, where she ran in, timing it perfectly so that she didn’t have to break speed, to win the ground ball in front of an opponent and kick it straight through. What is apparent with Ballard is how hard she works, and how much she hates being beaten, following the ball up with aggression if she got dispossessed or dropped a mark. With that continual hunt for the footy, there’s no doubt that Ballard will continue to improve over the coming weeks

Spending most of the game in the thick of things through the middle, Venning’s consistent attack on the ball and ball carrier was a big part of West staying in the contest, constantly applying pressure in the contest, where when she won the ball she’d break out and kick long forward. She perhaps looked more impressive as a forward however, with her ability to get separation on her opponent with her leading being a highlight, as well as her positioning in aerial contests and follow up work when she didn’t win it cleanly.

Fresh off of winning the SA U19 Championships MVP, Young returned to club football with a strong performance in the West Adelaide engine room. Whilst the 15-year-old has had more prolific games in her short SANFLW career stats wise, the more unheralded aspects of her game, such as her one percenters, her positioning and at times her courage were on full display throughout the contest. Things like the few times she’d run into a pack of players and win the ball, drawing in a free or getting it out, or when she’d position herself well in a marking contest to run onto a loose ball out the back. That positioning translated well to stoppages as well, especially around the ground where she’d come in later to avoid having an opponent go with her, and she could get to the ball first without much pressure.  Offered plenty around the ground, with those one percenters being a clear sign of workrate to assist winning the ball and helping teammates around the ground, but also working hard to be an option inboard or further down the line.

Splitting her time between being a key target in the forward line and a midfielder, Halfpenny enjoyed a good return from the recent U19 championships. Her follow up work around the forward half in particular was impressive, where even if she did not hold a mark she would generally win the contest at ground level to get the ball forward, delivering some nice kicks inside 50. She also consistently looked to get her teammates involved rather than blazing away or taking an unrealistic crossbody snap at goal, showing a team oriented style that was a big part of the Norwood win. She acted as a dangerous inside midfielder when given the run through the guts, winning a few clearances, standing up in attempted tackles to get the ball free.

Splitting her time between half forward and wing, Branford, despite being a shorter player, showed plenty of courage and fight to compete with opponents in the contest and in the air. She looked at her best when she was given space around the ground, no matter how little space she was given, she took advantage of it with her agility and speed allowing her to break away with the ball and kick it long. There was one particular play in transition during the third quarter, where she ran onto a loose ball, out running her opponent, and then delivering inside 50 from the centre circle, highlighting her strengths nicely.

Spent the match across half-back instead of her usual wing station, and the move paid dividends. Her ability to find space and create some run was evident in previous matches on the wing, and she applied her craft perfectly here. She applied constant pressure to the South Adelaide forwards, smothering kicks and wrapping up her opponents for all four quarters. She ended the game with 20 disposals, six tackles and four rebound 50’s to be one of her side’s best in the three-point win.

The defender had another strong outing against South Adelaide, in a performance that would have impressed her coaches. Playing deep in the backline, the 169cm defender was exceptional at reading the play and pushing off her opponent when needed. She helped out at defensive stoppages, and drove the ball forward on numerous occasions. Was crucial when South Adelaide drove forward at key stages of the match, and while she may not have had as many touches as previous games (eight), she let her defensive work do the talking.

Pretty much what we expected from the talented midfielder, notching up a team high 23 disposals. Working in the engine room, she extracted six clearances and ran hard to work towards one on one contests to provide an outnumber for her team. Putting in her best game of the year, she was instrumental all over the ground in starting strong passages with her midfield work. Continues to improve as the year rolls on.

A typically tough performance from the half forward, as she made life extremely difficult for Glenelg defenders. Laid a game-high 10 tackles to apply her usual frantic pressure as she worked up and down the ground. Playing more on the wing at times, Schirmer pushed up the ground to help her defenders push the ball forward, and will be pleased with how she performed on the day.

Started the game on the bench before moving around the backline. Worked her way into the game and rebounded the ball outside defensive 50 on multiple occasion. Showed composure with the ball and ended the match with a respectable nine disposal performance.

Did not win a huge amount of the ball playing forward but had some nice moments. She worked hard midway through the first term with a quick kick inside 50 helping set up the opening goal for the Bulldogs. After a quieter second term, Breguet was early on the lead to take a strong mark in the opening minutes of the third term, and then hit up a teammate. Though her teammate dropped the mark, Breguet rushed over to help to apply a bump. She also showed clean hands off a marking contest on the wing, and a nice sidestep to handball to Madison Lane, then late in the game locked the ball up in the dying minutes at half-forward.

Similar to Breguet, did not have a massive day, but tried to create some run out of defence. Her first couple of kicks did not quite go as planned with one turned over and another smothered, but she worked into the game and showed good composure in defence to hit up teammates on the switch. She had another quick kick from the defensive side of the centre to go forward in the final term, pushing up the ground to try and create some run. Her defensive pressure laying some strong tackles was impressive as well.

Playing forward and pushing up the ground, Ballard had a few chances to hit the scoreboard, with a chip to a teammate six minutes into the third term disguised as a set shot. Unfortunately for the Double Blues, the Central District defence was awake to it and chopped it off. Ballard had another chance to try and soccer the ball off the ground 12 minutes into the quarter but gave away a free kick in the process. She kept her defensive intensity high lunging across to try and smother on the wing, but then later on could not quite hold a mark going back with the flight. A late play from Chloe Scheer saw the AFLW-listed Crows talent sell some candy to Ballard and kick long to set up the winning goal.

Playing forward, Prenzler applied some good pressure and won some free kicks, setting up a goal 16 minutes into the first term off her free kick. She showed clean hands off the deck, and continued to harass opponents, whilst trying to find space for herself. She had a couple of kicks early in the third term, including a lace-out pass to Alex Ballard, then had a snap towards goal as she was being tackle which just bounced into the post, her second behind of the day. Overall she provided some good pressure inside 50 even if she did not manage to put one through the big sticks.

Relieving Jess Good in the ruck rather than standing as the number one ruck, Prowse still managed to find a way to have an influence on the contest. She showed quick hands at ground level, won a number of free kicks and provided great pressure around the stoppages. She roamed around with more freedom than when she purely plays ruck, and whilst she still attended a number of ruck stoppages – and nearly always won them – she was able to be a target around the ground and work deep when required. In the third term she took the ball out of the ruck from a forward stoppage but her kick was smothered. She had a number of long kicks down the line to help clear the danger when behind the ball.