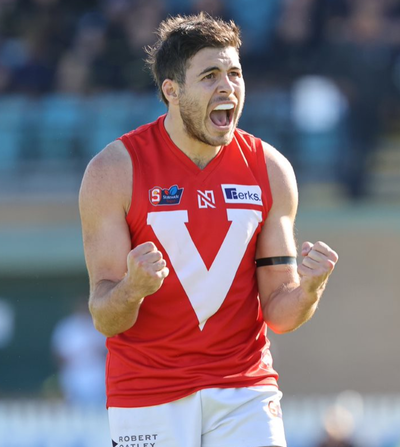 THE Aussie Rules state league action resumed this weekend around most parts of the country with plenty of enthralling contests. While most states went about their normal business, the WAFL was unfortunately cancelled due to the recently acquired COVID-19 cases and ensuing lockdown.

The Western Bulldogs delivered a dominant performance, defeating the GWS Giants 21.9 (135) to 10.3 (63) on Thursday night’s VFL opener. In a star-studded contest, the Dogs proved too good, kicking eight goals to two in the third to essentially seal the result. Potentially the most watched player in the VFL so far this year, last year’s number one pick Jamarra Ugle-Hagan once again impressed with a five-goal haul. With an injury to Bulldogs AFL tall Tim English, this could be the perfect opportunity for the 18-year-old to make his much-anticipated debut. Patrick Lipinski also impressed with 35 disposals and a goal in a strong claim to earn a debut to the AFL side. Giants recruit Jesse Hogan kicked four goals as he looks towards an AFL debut for GWS.

Gold Coast continue to adjust to life in Victoria as they defeated fellow interstate side Sydney Swans by 14 points in an exciting clash on Saturday morning. The Suns held off a fast-finishing Swans side to claim their first win of the season. Will Brodie was the Suns’ best with a massive 31 disposal, two goal performance through the midfield. Swan Dylan Stephens responded to his omission from the AFL side with 32 disposals in an eye-catching performance.

Carlton booted the biggest score of the round, triumphing over the Lions in a 24.10 (154) to 13.7 (85) win. Former Pie and Crow Ben Crocker booted seven goals in the victory, while AFL listed duo Will Setterfield (25 disposals, 10 tackles) and Paddy Dow (20 disposals, six tackles) both put their name in contention for a recall over the coming weeks. Omitted Lion Tom Fullarton was the best for his team on the day, stuffing the stat sheet with 34 disposals, 18 hitouts and a goal in a performance that should catch the eye of coaches.

It was a battle of two inaccurate sides as Essendon took down Collingwood with a 12.13 (85) to 6.14 (50) victory. Both sides wasted plenty of opportunities in front of goal, but ultimately the Bombers overwhelmed their opponents to walk away win. Essendon’s Tom Cutler put in a best on ground performance for the winning side, booting three snags to go with 27 disposals. Alec Waterman was reflective of his side, kicking 2.4 in what could’ve been a massive outing. Magpie Mason Cox fought hard in conditions not suited to big men, but will be facing a stint on the sidelines after finding himself reported.

ANZAC round in the SANFL began with a victory to North Adelaide over their Norwood opponents by three goals at Hisense Stadium. The game began in close fashion, with only two points separating the sides at quarter time. North Adelaide began to kick away in the second and third quarters, before Norwood began a last quarter comeback that couldn’t be completed. Jordan Boyle was instrumental for North Adelaide, racking up 33 disposals and seven inside 50’s, while teammate Edward Allen was fantastic through the middle, with 24 disposals, nine tackles and five clearances. Norwood’s best was Jacob Kennerly with 22 disposals and 10 clearances.

Adelaide’s Billy Frampton was outstanding in his side’s 23-point win over the Central Districts at X Convenience Oval. Frampton booted seven goals to go with 19 disposals and 12 marks (nine contested) in a match winning performance. Frampton will surely be in contention for a recall at AFL level after Saturday’s match. Ruckman Kieran Strachan continued his good performance with 38 hitouts, while David Mackay found plenty of the ball with 24 touches. Central Districts were well served in the loss by Luke Habel (31 disposals) and Aiden Grace (5 goals).

South Adelaide continued their undefeated season with a strong 39-point win over a struggling Sturt side at Flinders University Stadium. A close contest for the first three quarters, Sturt trailed by only a goal at the final break. South Adelaide absolutely blew the game wide open in the last quarter, kicking five goals to none in the final term to seal the game. Former AFL star Bryce Gibbs was exceptional for South Adelaide, finishing with 35 disposals, seven tackles and seven clearances in a best on ground display. Joel Cross was also strong for the victors, kicking three goals from his 24 disposals. Sturt defender Casey Voss was valiant in defeat, finishing with 26 touches and 13 rebound 50’s.

Glenelg have held off a determined Port Adelaide, to leave ACH Group Stadium with a narrow 10-point win. Inaccuracy cost the Power, as they finished with the same amount of scoring shots as their opponents, but lacked the ability to convert in key stages. For Glenelg, Lachie Hosie booted five goals, including two in the last quarter that proved crucial in the game’s result. Michael Virgin was also influential in the winning side, finding the ball 27 times to go with 16 marks. For the Power, Sam Powell-Pepper impressed with 34 disposals, eight tackles and eight clearances.

In a nail biting clash, Woodville-West Torrens defeated North Adelaide by three points in the final game of the ANZAC round. Eagle Joseph Sinor was the hero of the match, kicking the goal to give his side the lead deep into the last quarter, and North Adelaide couldn’t conjure a game-winning response in time. Former Crow Riley Knight was terrific for the winners with 27 disposals and a goal, while ruckman Jack Hayes was also strong with 21 disposals and 21 hitouts. For North Adelaide, Jarred Allmond and Alexander Spina combined for 62 disposals.

It was a tale of blowouts in the TSL with two games decided by over 90 points. In the first game of the round, North Launceston responded from last week’s loss in the perfect manner, belting Lauderdale by 93 points at Lauderdale Oval on Saturday. The game was over by the main break, with North Launceston kicking 13 goals to nil in the first half. For the winners, Jay Foon was his side’s best while Brandon Leary and Thomas Bennett combined for eight goals. For Lauderdale, Nat Franklin battled hard all day.

The remaining two games were played on ANZAC day, in a fantastic day for local football. Starting at Kingston Twin Oval, the Tigers cruised away with a 24-point victory over Glenorchy on Sunday afternoon. The first three quarters belonged to the Tigers, as they took a 46-point lead into the last quarter, before a late Glenorchy comeback stemmed the bleeding. Tiger Elijah Reardon continued his strong form, claiming best on ground honours, while Glenorchy’s Harrison Gunther kicked three goals to be his side’s best.

The final game of the round saw Launceston demolish North Hobart on their own home deck, running away with a 125-point triumph in a ruthless display. The match was tense for the first two quarters, with only eight points separating the two sides at half time. Launceston then produced one of the best quarters of the season, kicking 13 goals to none in the third quarter, and this was compounded by a six goal to none final term. Launceston’s Dylan Riley was magnificent, kicking nine goals in the second half to finish with 10 for the match. Jay Blackberry was also excellent, kicking two goals from 31 disposals. For North Hobart, Nicholas Jackson worked hard all day.

Redland-Victoria Point have walked away with a textbook win over Palm Beach Currumbin, claiming a 60-point win at Totally Workwear Park on Saturday afternoon. A strong first half from the Sharks set up the win, with their opponents struggling to recover from the half time margin. For the winners, Jamie Ivers kicked five goals in a day out, while William Johnson was also a strong contributor. For Palm Beach Currumbin, Mitchell Johnson resumed his great start to the year, backing up last week’s four goals with five goals on Saturday.

Broadbeach have sent a message to the rest of the competition, smashing Sherwood Districts by 102 points at Sherwood Oval. It was a four-quarter performance from the visitors, kicking at least five goals in every quarter and never giving the opposition a chance. Broadbeach’s Sam Jasper kicked a stunning eight goals and was easily his side’s best on the day but had strong support from teammates Ryan Pickering and Samuel Weddell. For Sherwood Districts, Billy Hawkes was his side’s best on a dark day for the club.

A close contest all day, Labrador did enough to hold off Surfers Paradise as they escaped with an eight-point victory at Sir Bruce Small Park. No team led by more than seven points at any break, and the game looked to go either way, but Surfers Paradise fell just short of snatching the win. Former Lion and Sun Pearce Hanley was instrumental in the win, and was Labrador’s best performer, while Max Johnson was also damaging. For Surfers Paradise, Max Green and Brody Haberfield were among the best.

A final quarter burst sealed the win for Morningside as they stormed away from a Wilston Grange side that hung around for the first three quarters, before falling by 40 points. Morningside turned a three-point deficit at half time into an 11-point lead at the final change, before piling on five goals to none in the final term to claim a handy victory. For Morningside, Nathan Colenso delivered his second bag of five goals in three games as he continues to prove a threat up forward, while Darcy Cameron-Reeves was also one of his side’s best. For Wilston Grange, Will Mckenzie’s four goal performance kept them competitive.

Maroochydore were too good for Noosa as they triumphed by 70 points at Maroochydore Multisports Complex in Saturday’s final match. From the first quarter to the last, Maroochydore tormented their opponents with their dominant play, and a victory never looked in doubt. For Maroochydore, Mitchell Scholard booted four goals, taking his season tally to 16, while Joshua Filo was fantastic. For Noosa Ryley Buntain and Ben Guthrie never gave up.