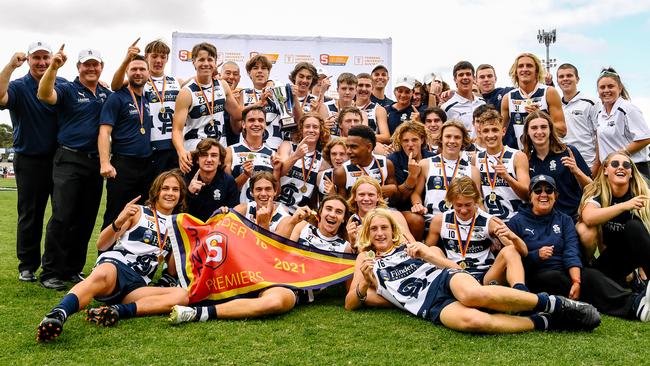 SOUTH Adelaide is the 2021 SANFL Under 16 premier, after inflicting a second half assault on Glenelg in Sunday’s decider at Flinders University Stadium. The Panthers, who also took out this season’s minor premiership, booted 12 goals to the Bays’ two after half time to run away emphatic 53-point victors. Having lead at the main break, Glenelg looked on track to claim an unprecedented fifth-straight Under 16s flag, but that was not to be as South triumphed for the first time at any level since 1995.

Panthers ruck and vice-captain Tom Schirmer was awarded best afield honours, finishing with 15 disposals, five clearances, 26 hitouts, and a goal in his side’s salute. Competition leading goalkicker Jack Delean sprung to life and helped South break the game open in the third term, capping off a terrific season with 15 touches and three goals for the premiers.

Joining him among the goals were Phoenix Hargrave and Ryan Pearsons, who both snared two alongside Jake Agnew. South’s key ball winners were also at play during the big dance, with Jace Davis notching a team-high 20 touches and Tom Wheaton claiming 16, including seven marks and a goal.

While there has not been much good to shout about for Carlton fans of late, the Blues can look forward to seeing more of father-son prospect, Lucas Camporeale – the son of 1995 premiership player, Scott. The consistent ball winner racked up a game-high 22 disposals to average 27 across Glenelg’s two finals outings.

Bays skipper Ben Ridgway worked hard for his team to conclude with 19 disposals, eight tackles, five marks and two goals. Josh Altus was another to boot multiple majors, also finishing with a pair among his 15 touches. Bodie Ryan found it 16 times and among his 15 kicks, registered nine rebound 50s, while Ashton Moir soared for 10 marks (five contested) and Beau Symonds got his hands dirty for 11 tackles in yellow and black.

Players from both sides will now likely filter into the Under 18 competition and school football season, with the cream of the crop potentially even vying for state Under 17 selection.